How to translate this plaque about John Duns Scotus?

The following is a plaque in commemoration of the 700th anniversary of the birth of John Duns Scotus: 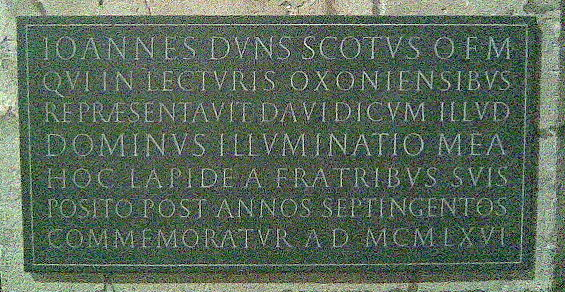 In text (missing some details like interpuncts and ligatures):

My attempt to translate it:

John Duns Scotus O.F.M [Fransican friar], whom in lecturing oxonians represented David [that?] // The Lord is my light // this tombstone [?] from his brothers [fransiscan friars] placed in commemoration of 700 years // year of the Lord 1966

That just does not sound right. Not sure how to put David in there. Lapide is almost literal in Spanish (lapida) but not sure what is best for English. And the last bit is also strange. Not sure how to fit commemoratur as it does not state in commemoration of what. But, of course, many other things could be wrong!

Here is a literal translation:

John Duns Scotus, OFM, who in his Oxford lectures represented that famous line of David, "the Lord is my light," is commemorated by this stone placed by his brothers after seven hundred years in AD 1966.

Not the answer you're looking for? Browse other questions tagged translation-check latin-to-english-translation inscription or ask your own question.