If these Greek characters ever had alternative orthographies / typographies

Wondering if any of the following letters were or are ever written in the way described for each.

The answer will depend somewhat on whether you're asking about historical variants or modern typography.

For example, I wouldn't be surprised to see a filled-in Δ in some sort of "artistic" modern typeface, but it would be unlikely to appear in a real written form, simply because filling the triangle in with a pen or other writing implement would be unnecessary work.

Ξ in ancient times was sometimes written with a vertical stroke right through the middle (so not like an E), but that's historical only (as far as I know). It's also seen in more modern times with the horizontal strokes connected with right-to-left oblique strokes, so that the net effect is somewhat like a two-layered Z.

Both Ω and ω have been written with various proportions and details of the basic shapes.

Σ was commonly written in a more cursive way as C, especially in uncial manuscripts. This is referred to as a "lunate" (or "moon shaped") sigma.

Late addendum - Here's an image of the connected form of Ξ that I referred to above:

(I'm assuming you're asking about the use in ancient/Classical times; please correct me in the comments if this is wrong.)

Delta (Δ) was never filled in with black, for a simple reason: the Greek alphabet (and similarly the Latin alphabet, and their predecessor, the early "block" form of the Phoenician abjad) evolved to be carved with a stylus or chisel, not written with a pen or brush. That's why there are so many straight lines and simple half-circle curves. And that's also why there are never any solid blocks of color: modern pens could color in the inside of a delta, but on a wax tablet or a stone monument it would take lots of time and effort and potentially damage the medium.

Later on, Greek was written on papyrus and other media, and at this point things started getting smoother and curvier. That's when delta lost its sharp corners and became a single smooth stroke, giving "δ". But now the emphasis was on writing quickly and easily, and going back to fill in with ink would just make this harder.

Xi (Ξ) was originally written with a line down the middle: it comes from Phoenician samekh which (in the "block" form) looks like a vertical line with three bars through it. However, this vertical line disappeared in Greek, probably because it made xi look too much like epsilon (Ε). In handwriting, the ends of the bars tended to get joined together; this is where you get the lowercase Greek form (ξ) and the Coptic form (Ⲝ). (Compare English cursive writing.)

Omega was a Greek invention, which is why you don't see it in related alphabets like Phoenician. They took omicron (Ο) and broke the circle to make a new letter; when this wasn't an obvious enough difference, they put little serif-like lines on the ends, to make the break easier to see (Ω). This worked great in inscriptions but wasn't always clear enough in handwriting, so the flat horizontal part got longer, then started curving up at the ends, and eventually you end up with the lowercase form (ω) where the circle itself has been reduced to a tiny nub! So yes, both your variant forms of omega existed as in-between stages of this process.

Sigma and epsilon were both written with straight lines because, again, it made them easier to carve/incise. Curves happened in handwriting (which is how you get ε) but sigma tended to be simplified further in these contexts: it was often written in a "lunate" (crescent-shaped) form, "Ϲ", with the little indentation on the left totally gone. Alternately, the bottom stroke was sometimes left out, and when that version got curved in handwriting it gave "S".

(Plus, a couple other un-asked-for but potentially interesting notes, since orthographic history is something I'm excessively interested in! Latin "C" is unrelated to lunate sigma; its Greek sibling is gamma. And a few alphabets did in fact contrast the three-stroke and four-stroke sigma shapes, such as Etruscan, which used three strokes for the sound in "sip" and four strokes for the sound in "ship"; the four-stroke one came from a merger of four-stroke sigma and the separate letter "shan". Now, some modern alphabets are doing the same, using Latin "S" for the "sip" sound and borrowing sigma back from Greek for the "ship" sound!)

Not a real answer to your question - just wanted to show how different Ancient Greek writing was from the way we perceive it now. Here's a possible (ortho)graphic reconstruction of the first ten lines in the Iliad by Barry Powell (originally presented in Powell 1991 with a typo; see a slightly revised version below taken from Powell 2009/2011): 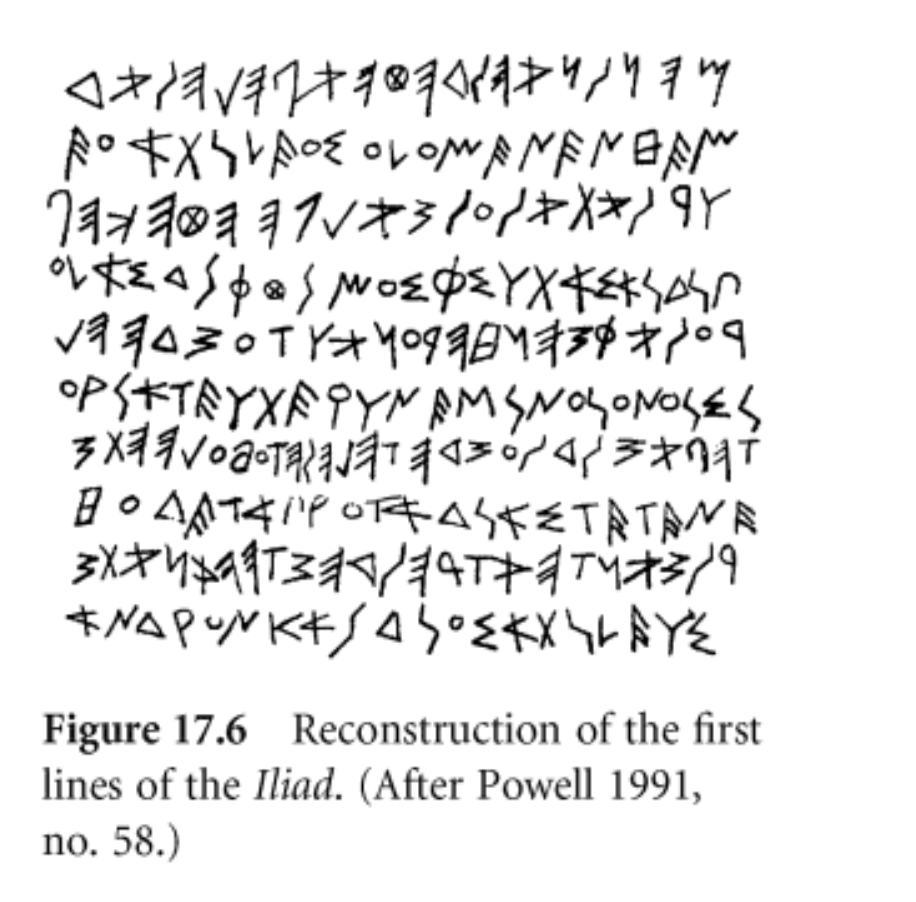 I wonder how many people would be able to recognize it.

Not the answer you're looking for? Browse other questions tagged greek language-evolution or ask your own question.

11
Relationship between early Latin and Greek?
8
Can a subjunctive verb ever be modified by οὐ? (Greek)
6
How do you translate these verbal adjectives? (Greek)
21
Did the Romans ever combine Greek and Latin morphemes?
8
About Sappho Edmonds 89 Campbell 48
0
Can you please fix the mistakes in translating these prayers from Koine Greek to English (Part 2 of 2)?
3
What do these Greek words say? Possibly 2nd century
10
Are the names of these months realistic?
5
What is the evidence for a long vowel in χριστός “anointed” and Latin Christus?
7
Does Greek accent ever affect Latin stress?