What do these Greek words say? Possibly 2nd century

Here is a very old (possibly 2nd century) depiction of the Crucifixion of Jesus on an engraved gem: 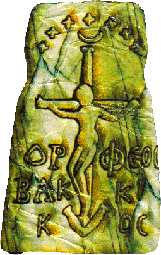 What do the words say?

The words are Greek:

My guess is that it was meant to be Orpheus Bacchicos, either misspelled or written in a different dialect. In this case, it would mean "Bacchic Orpheus" (where "Bacchic" refers to the worship of Bacchus, and "Orpheus" is the singer who went down to the Underworld and returned).

Both Bacchus and Orpheus had cults relating to death and resurrection, and they were sometimes unified into a single deity called "Zagreus", so I wouldn't be too surprised to see their names associated with the Christian idea of the Resurrection.

According to this site, it has the image of

A dedicated scientific article analysing the stone (in relation to, for instance, the Crucifixion of Jesus) can be found here. Notice that it is unclear if the image is that of Jesus. Orpheos might be a reference to the Greek legendary figure of that name. For instance, the article states:

The fact that Christ appears represented on a cross, but is designated OPΦEOC BAKKIKOC—“Bacchic Orpheus”—, is of remarkable singularity in religious history, because Christ has taken the place of Orpheus, and not vice versa, as it is well-known from catacomb frescoes, for example with Orpheus as the Good Shepherd. Therefore the artefact would be syncretistic or Orphic, however with an Orpheus subjected to Dionysian suffering like Marsyas at the stake, and not like the Apollonian Orpheus with his lyra amidst tamed beasts. Bakkikos as an epithet of Orpheos is not tautologic, because beside the tradition that (as it seems to be the case here) Orpheus was killed by the enemies of his own following, there was among many others one famous variant, in which Orpheus, after returning from the Hades, abandoned his earlier habit of worshipping Dionysus-Bacchus and turned to Helios-Apollo instead, for which the insulted god had him dismembered by his Maenads. Therefore the designation Bakkikos would contrast this Orpheus on the cross from the follower of Apollo and identify him as the founder of the Dionysian Mysteries (see below).

Not the answer you're looking for? Browse other questions tagged greek greek-translation or ask your own question.

6
How do you translate these verbal adjectives? (Greek)
5
What is this participle λέγοντες doing? (Greek)
6
The three maxims at the Temple of Apollo (Greek)
4
Could the u in e.g. aufero be related to the u in Mycenaean a-pu-do-ke?
3
Sappho 94: the Spaniards' completion
2
Translating "Pigasus" into Greek
6
What's the difference between ἀγάπη and στοργή?
11
Can one translate ἀθάνατος as 'living' rather than 'immortal'?
3
Ancient Greek Romans 1:27 - I don't understand this phrase through a straight translation into English