What's the translation of this Medieval document? 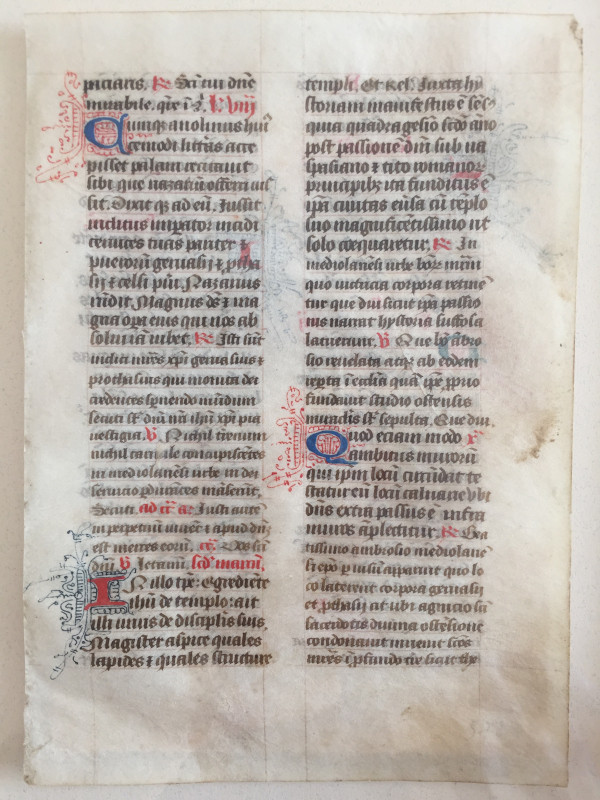 Found this document at The Antiquarium in Houston. Would like to know what it is describing. Translations as well as paraphrases will be equally appreciated.

Here is a transcription starting from the first initial with only a few lacunae. I've mostly filled in the abbreviations and added punctuation, except when I didn't.

[up to the initial, this next line is unclear and contains many technical abbreviations. I can only make out "Vos servi? Domini." The red line starts with "secundum." It continues:]

Just wanting to add to brianpck's helpful answer since my account is too new to comment yet. The abrupt transition from a Gospel snippet to a patristic commentary on that Gospel is a standard feature of the Office of Matins on important liturgical days. It's still found in the most recent pre-Vatican-II edition of the Roman Breviary.

The snippet is the opening of the Gospel of the day's Mass. The words after templi are et rel.; i.e., et reliqua (and the rest).

So it is a brief recollection, or if you will, a preview, of the day's Gospel, with commentary. In recent breviaries this would be found in the final nocturn of Matins in place of the more extended hagiographical or patristic readings found in the other nocturns.

Update: Thanks to the text reconstruction by Brian, I could expand a bit my search. In effect, it seems to be a liturgical text, related to the feast of saints Gervasius and Protasius, celebrated on June 19. Text marked in red seems to be rubrics for instructions on praying.

The first column starts (from the capital C) with a main (boldish) text which Brian already presented:

I cannot find any reference to this text, but it seems to name the saints Nazarium and Celsus, which together with Gervasius and Protasius, were martyrs of Milan around the 3rd century.

Then, it comes the response (R):

which is to the feast of these saints.

Then it comes the versicle Nihil terrenum, nihil carnale, also related to the feast of the saints.

Going to the second main text, this resembles quite well that found in a commentary on the gospel of St. Matthew (regarding the destruction of the temple; text closer to Mark 13:1 though) by Rabanus Maurus, written in the 9th century (so it would not be a commentary by Jerome, as Brian suggested). An example of the text can be found here (bottom of page 1086).

The next response (R) can also be found among the hymns related to the feast of the martyrs:

Notice again Mediolanensis refers to the area of Milan in Latin.

The next response resembles that taken from a commentary by Gregoris Turonensis (or Gregory of Tours, from the 6th century) on the saints Gervasio, Protasio, Nazario and Celso (also found in the Patrologia Latina). As an hymn, it also belongs to the feast of the saints.

Then comes another main text, followed by another hymn related to the feast of the saints.

In conclusion, it seems pretty evident that the text, taking pieces and commentary regarding the lives of the saints here and there, and whose verses have been indexed as hymns of such feast, is a liturgical text used for celebrating the feast of Sts. Protasius and Gervasius, as also Brian concluded.

Here are two sentences from the readings which show that the service celebrates the foundation of a major church building. .1. The bottom line on the left says: What Stones! What Structures!

(which luchonacho identified as Mk 13.)

And .2. on the right, next to the tail of the blue and red “Q” “the circuit of the walls” ambitus murorum

Next to the last Red R/ on the page it describes how Bishop Ambrose found the relics of Saint Gervase and Saint Protasius, martyred in the time of Nero. These bones were built into the foundations of a magnificent new Church in Milan.

'To the most blessed Ambrose, Bishop of Milan, at his command there was revealed in what place the bodies of Gervase and Protasius lay, and confirmed where by divine indication to the awareness of the holy priest, he found the holy youths glistening deep down.'

Not the answer you're looking for? Browse other questions tagged medieval-latin christianity or ask your own question.

26
How different were high medieval Latin dialects from different parts of Europe?
13
Why were some medieval maps made in Latin?
2
Simple translation from Polish and English to Latin
8
Can you please translate these paragraphs (13th & 14th century)?
13
Representing medieval latin abbreviation symbols in Unicode
10
The medieval abbreviation eccƚie
8
A medieval scribal abbreviation missing from Unicode?
6
Latin etymology of Spanish "tarde"
6
Help with paleography in a 16th century grant
9
What do three diagonal dots above a letter mean in the "Misal rico de Cisneros" (Spain, 1518)?