Placita de quo Warranto is the 1806 printed transcription of latin legal texts from around 1300 written on vellum. There are many abbreviations. The 1806 document in its preface gives an example transcription page with the same page printed from an 1806 engraving reproducing the original orthography. Here are transcribed and engraved versions of one paragraph from that example:

All of the abbreviations in this example are documented in Capelli's The elements of abbreviation in medieval Latin paleography. In particular, the abbreviation mark on the p for pre or prae is mentioned in section 4.1 at the top of page 20 of Capelli. Here it is in use in the example: 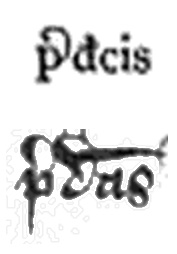 The same flamboyant loop on top of the p can be seen in this handy list of some latin abbreviations. And it is also used on some other letters:

Wikipedia's scribal abbreviation page has an example embedded in an image:

Is there a Unicode combining diacritical mark to allow composition of something like the flamboyant flourish on the p?

According to the Wikipedia article you mentioned, this abbreviation for præ is described as:

p̄ (above) – prae, pre- (alternatively a mark similar to -us comma above, but with a small spiral glyph, could be used for this meaning, and is also valid above the letter q)

E.g. this example of the book you quoted could be typed as:

As for COMBINING US ABOVE U+1DD2 in Unicode, it was proposed in L2/05-183 with the following justification:

At first I thought the answer to the title question is positve. However Peter S. Baker pointed to me that the character is present in the MUFI specification as F1C8 COMBINING ABBREVIATION MARK ZIGZAG ABOVE CURLY FORM (in my opinion quite a misleading name as it is definitely not a zigzak).

Not the answer you're looking for? Browse other questions tagged medieval-latin orthography abbreviations or ask your own question.