What does this bit of papyrus say? 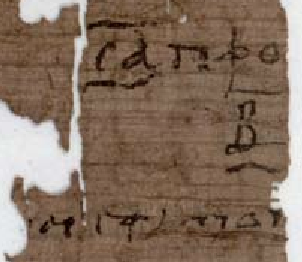 I just realized I hadn't written that, in the above transcription, I distinguish between a single underdot (like under the T), which means a somewhat doubtful letter, and a double underdot (like under the I), which means a letter so doubtful that the given suggestion is just a guess, because e.g. it is only partially present and the rest could lead to many different letters.

Not the answer you're looking for? Browse other questions tagged greek text-corpus papyrology sappho or ask your own question.

7
How are P.Oxy. numbers chosen?
8
Did P.Oxy. 2288 contribute in any way to our knowledge of Sappho's hymn to Aphrodite?
4
On what basis does Campbell put P.Oxy. 1231 fr. 12 together with fr. 15? And why does Edmonds not? And why does C read more than Grenfell and Hunt do?
3
About the Sappho fragment containing Doricha's name that was found first (Campbell 15, Edmonds 37)
3
About Sappho 16, ll. 6-9
2
Tracing apparent book-IV colophon not found in Voigt but found in a Spanish Sappho book based on Reinach's French edition
2
What papyrus is this?
3
Tracing mysterious line ends in a combination of Sappho fragments found in an Italian anthology
2
Two Sappho-related reference requests