As some of you will definitely know, I have been grappling with Sappho for a long time. Lately, I have come to an impasse in a couple places, where I have said all I can without a specific reference I don't have access too. I don't know why I thought asking for those references in a question was inappropriate, but anyways I asked in CONLOQVIVM. The second request I posted yesterday, and JI encouraged me to post a question… so here I am.

I will give background for both requests. Feel free to skip to the list at the end of the post.

Related questions are 1 and 2. A little backstory.

OK, so here's how this combination went.

I tried to figure out how the combination with fr. 3 col. i gave the lacuna's length, and the likely joint explained in my answer to question 1 implies that yes, a couple lines of LP 60 were completed, as appears in Ferrari/'s book but not in the anthology, but doesn't produce the line ends or the lacuna's length as far as I can tell. So the only way to figure that out would be to read the article by Puglia, hence my first request.

In my Sappho work, I tried to be as complete as possible on everything, including testimonia. That is where I found P.Oxy. 2506. These are a bunch of fragments (over 50) all deemed part (I think) of a single scroll of commentaries on lives of poets. I have a bunch of images at my disposal, but what I'd like to know is a) WTF is up with all those fragments numbered with letters instead of numbers in the first image, and b) Why each fragment was or wasn't assigned to Sappho. I have found some articles that give partial answers, and I can see why each of those assigned to Sappho was assigned to Sappho, but I would like to know more. I believe at least part of the answers would probably be in the volume that published the papyri, which is vol. XXIX of The Oxyrhynchus Papyri. Sadly, the online volumes stop at XV (which is why I had to have scans posted here from vol. XXI about P.Oxy. 2166(a). So here's request 2.

I formerly wrote vol. XIX, then realised it was actually XXIX. Oops. XIX was indeed edited by Lobel, commented @Draconis.

As announced in his comment, AlexB got ahold of Puglia 2007, sent it to the mods, and our tricipitous mod forwarded it to me. I read it, and I can now answer that part of this question.

So, with a lot of pretty solid arguments, the article proposes the following collage of P.Oxy. 1787 fragments (where 87(13) and 87(14) have swapped numbers): 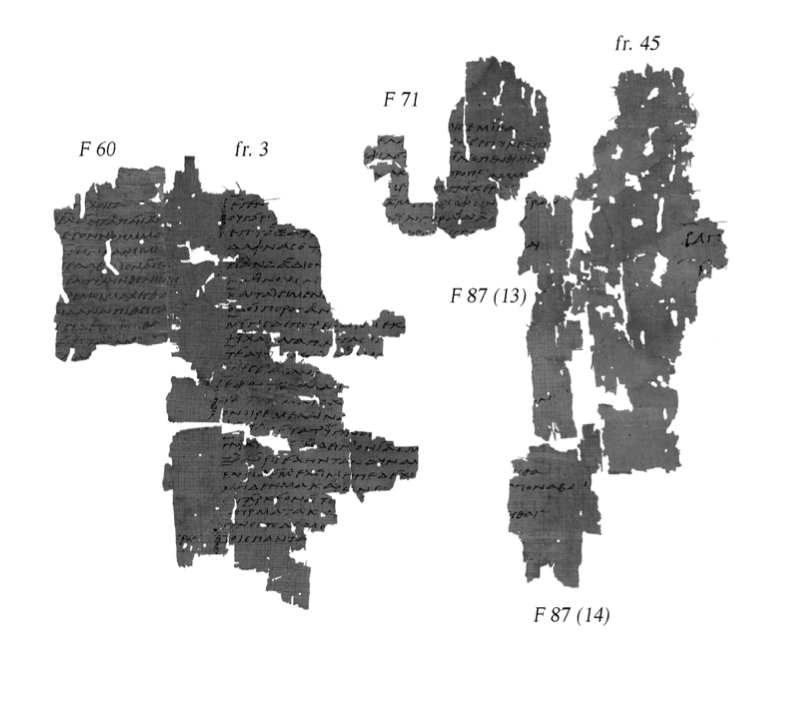 From this, we can see the following:

The last missing bit is: "Why exactly five, and not, say, six?". Well, let's look at the other fragment that goes before this collage: 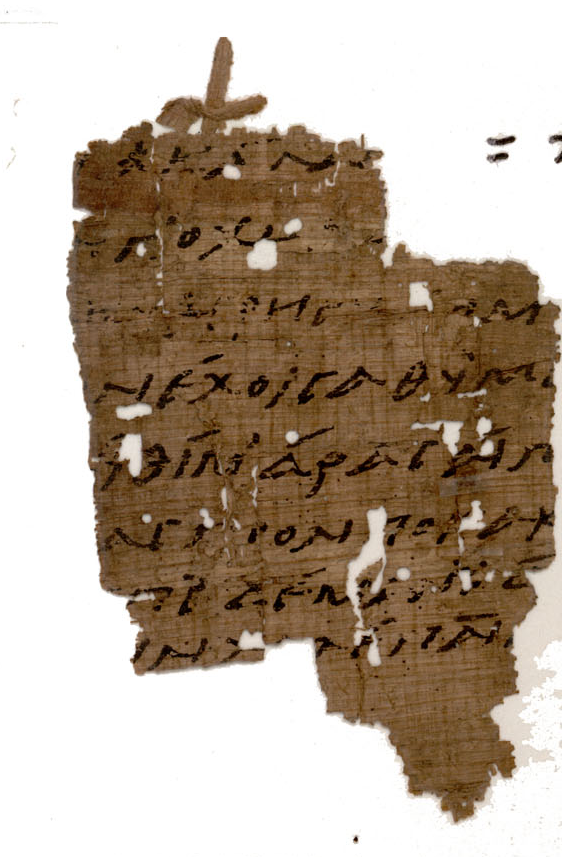 See that little protrusion at the bottom-right? It's empty. This means the last line of the fragment was the last of its column.

Now, we may say, "Why should we assume this fragment went immediately before the P.Halle lines?". Well, we have good reasons (cfr. history in the question body) to place it before said lines, and if we suppose a full other column between the two, the result is that we have a single poem that is way too long compared to the two whose lines are all partially preserved on fr. 3 and its ends 87(13)+87(14) – and we know those have no extra lines because they are between coronides. Therefore, the lacuna length is settled.

Moreover, we can also say that, after the last line of the collage 6.A.vi here, there were 6 lost lines, the line ending in ]ΗΡΟϹ on fr. 3, and then collage 6.A.v. Who knows where the poems split from each other…

In the below list, TBI stands for To Be Investigated

Well, I mentioned it in the comments, so I might as well delve into it. Now, this is a group of papyrus fragments, whose image can be found here, which was mostly attributed to Ibycus. Now, I decided not to go too deep into this, but the gist is that there are good papyrological / content arguments to place most of these fragments into one or more scrolls of commentaries on Ibycus. There are, however, "three" exceptions which are attributed to Sappho, namely the three below. 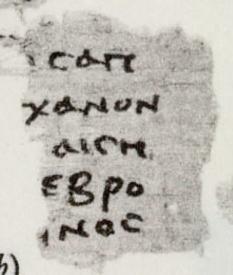 The X in l. 2 may be a Z, and the vestige in the last line may just be something funny going on with the papyrus rather than actual ink (a "papyrus quirk", as I say). This is given to Sappho because l. 1 ends in ϹΑΠ[Φ-. Note that this fragments is confusingly joined to the Ibycean fr. 12(b) in the picture, and I believe the split happens either where the seemingly wannabe continuous ink stroke at the top-left breaks, or where the digitiform protuberance starts. 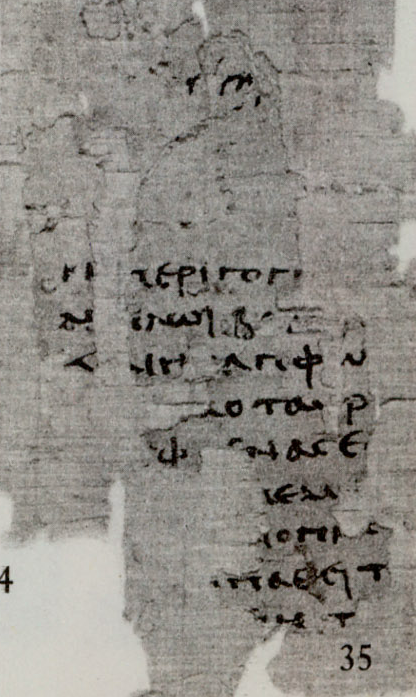 This is fr. 35. I think you can see why I said "three" exceptions above: this very clearly appears to be more than one fragment, plus another one below them all, which is fr. 4. Here are the borders I think I can trace: 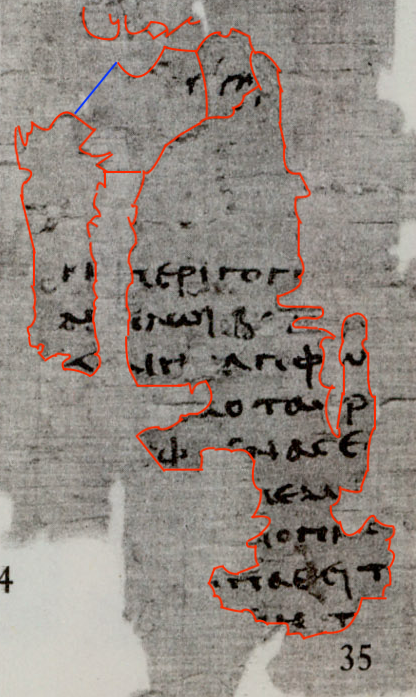 I read the leftmost fragment as:

with my usual convention of using + to denote blank spaces on the papyrus.

The top-left appears to be:

The top-right fragment, the smallest of the bunch, reads:

And the biggest fragment of all reads:

The following is the combined transcription:

On line **, the alpha is the combination of the uncertain A in the biggest fragment, and the vestige on the leftmost one.

Well, there is one problem left here. Ll. 1-2 of this combination in my transcription appear to be usually taken as one line. My problem with that, and the reason I don't read π(ερὶ) γήρ[ως like Cambpell, is that the eta, were I to do so, would acquire a spurious little curve on its bottom-left. Here are the letters as I see them:

As you can see, the ?? doesn't belong in an eta. So I wonder: can we explain it away as a "papyrus quirk", and read the single line as Π̣'ΓΗΡ̣[ combining all fragments, or can we not? 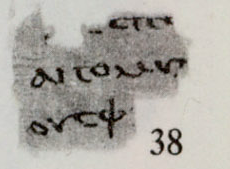 L. 2 completes to ἀπὸ Μυτ[ιλήνης, hence the attribution to Sappho.

Fr. 27 is transcribed as below: 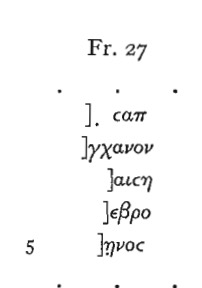 After better inspecting the papyrus, I agree with everything. On l. 1, I note that my I is actually curved, or «the right-hand arc of a circle», as the volume puts it, and that my vestige may not be in the papyrus fragment, since the division from another scrap is doubtful.

On fr. 35, they say nothing about my problem, and just smash the lines together. I'm not 100% convinced that the spurious thing is a papyrus quirk, but I guess for the sake of consistency with "e.p." I will accept this explanation.

Now, my combined transcription with fragment separations is: 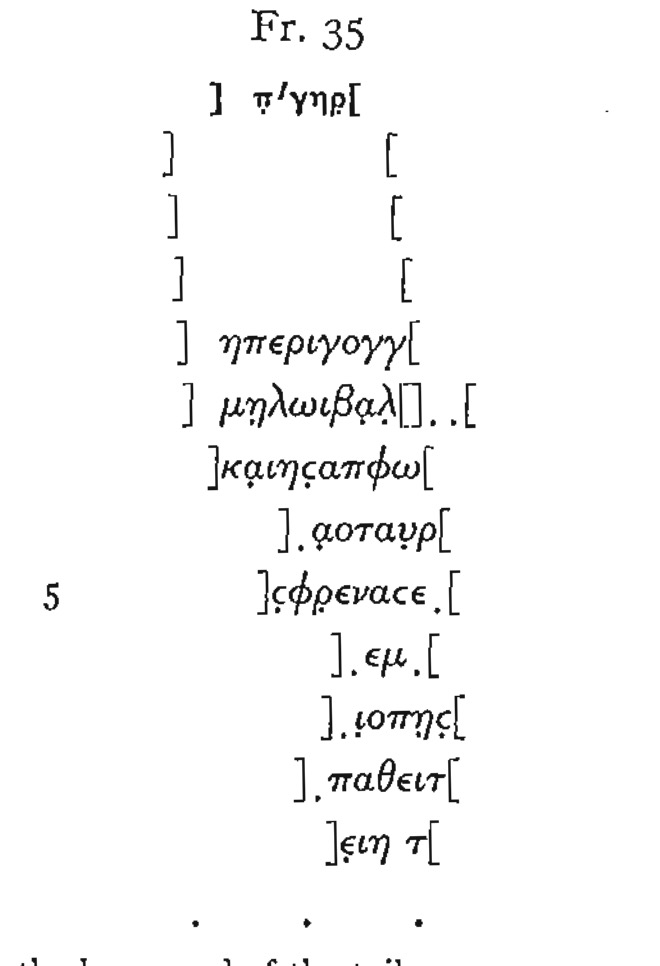 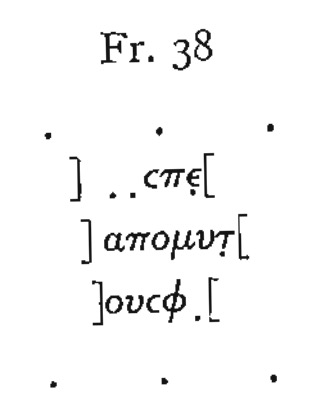 Not the answer you're looking for? Browse other questions tagged greek sappho text-corpus reference-request or ask your own question.

4
About supplemented word ὀλόφῳ in a fusion of Lobel-Page fragments from an Italian Sappho anthology
3
About Sappho 16, ll. 6-9
3
Tracing mysterious line ends in a combination of Sappho fragments found in an Italian anthology

3
About the Sappho fragment containing Doricha's name that was found first (Campbell 15, Edmonds 37)
3
About Sappho 16, ll. 6-9
4
About P.Oxy. 1787 fr. 9
6
Identifying corrupted Sappho fragment or mention of Sappho found in just-newly-found-online Spanish edition of Sappho
2
Tracing apparent book-IV colophon not found in Voigt but found in a Spanish Sappho book based on Reinach's French edition
2
What papyrus is this?
3
Tracing mysterious line ends in a combination of Sappho fragments found in an Italian anthology