Somewhat recently, I stumbled upon this Italian Sappho anthology, where, among other combinations, the following is found: 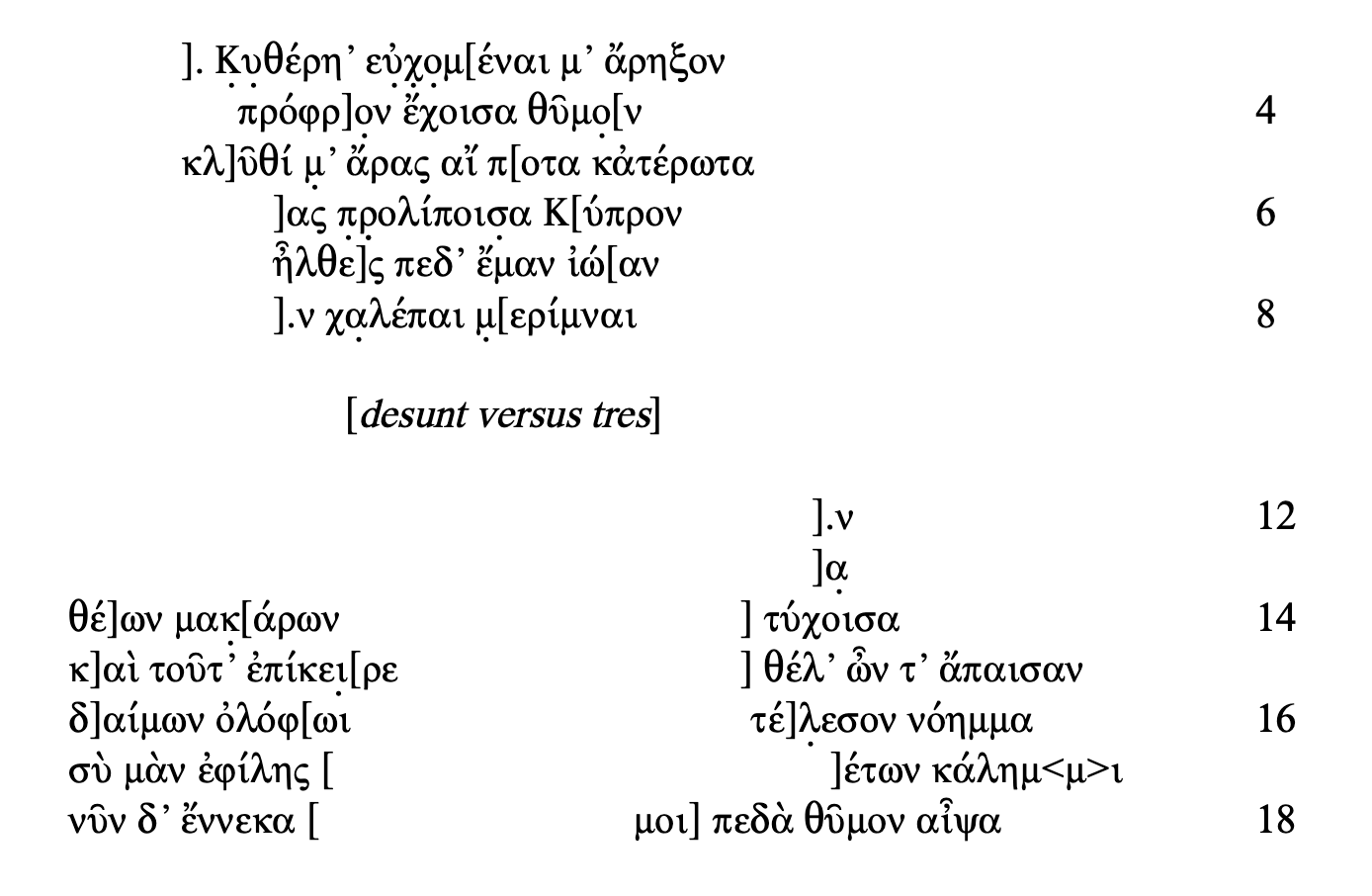 First off, they are not listing all the fragments joined into this combination. Besides LP 86, LP 60, and LP 65, there are also LP 66(c) and LP 67(a) in here. I tried to trace all I saw here, and mostly succeeded, except for ll. 12-13, which seem to have come from nowhere. I color-coded LP 60 black, LP 67(a) blue, LP 65 red, LP 66(c) green, the unidentified end-of-lines pink, and LP 86 purple, and, with minimal adjustments to the text (including reinstating a completely ignored line of 67(a) which gives the very beginning of l. 21 and fixing the inmetrical ἀμφιβιβάσκει in l. 27 to ἀμφιβάσκει, hopefully without altering the meaning too much - and the translation "circonda", "surrounds", makes me optimist since I know ἀμφιβάσκει means "surrounds" from an Edmonds restoration reading μυρίαν ἄμμω]ν ῤύτιν ἀμφιβάσκει), I got the following: 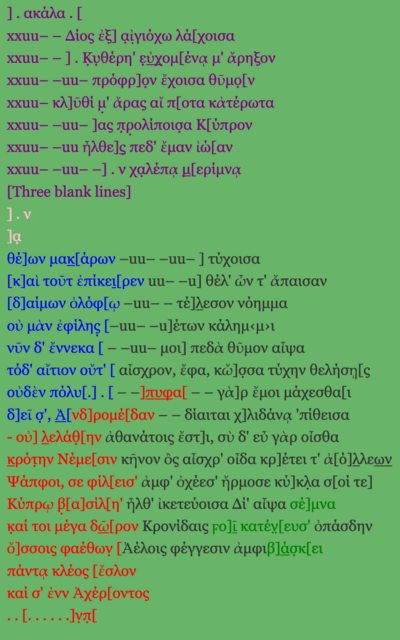 Note that the supplements are usually left black, unless they are somehow "called for" by a papyrus fragment, in which case they take the color of that fragment. Note also that this is a preview of a blog post due next Saturday, hence the green background. Finally, note that I introduced the notation of underlined letters for those letters that, in a raw transcription, would be simple "."s, but are guessed based on surrounding words/letters or on accent marks above them.

I have a couple guesses as to the origin of those pink letters:

Can you help me trace those to their source?

Una Mitra per Cleis, where Ferrari published the fusion's text (or almost - cfr. this other question and my answer there), has those line endings just pop up out of nowhere, as if they were from one of the fragments joined into this. So the mystery thickens.

That same Ferrari book, had I checked further, would have yielded the following note:

Ferrari 2005b is this article, where the blue and pink parts in the collaged text above are missing, and the lacuna is not postulated.

Wait though. P.Oxy. 1787 fr. 3 has a scanty first column, the poems I mentioned coming from col. ii. And on col. i, there is a line-final Ν halfway through the papyrus. Below it, a faint trace of quite possibly an alpha. So I think we have our source.

I tried juxtaposing P.Oxy. 1787 fr. 3 and the purple part, both of which I have an image of, and it seems there is a kinda snug fit between the two. If that is correct, the last line of the purple joins with the first line in the following image: 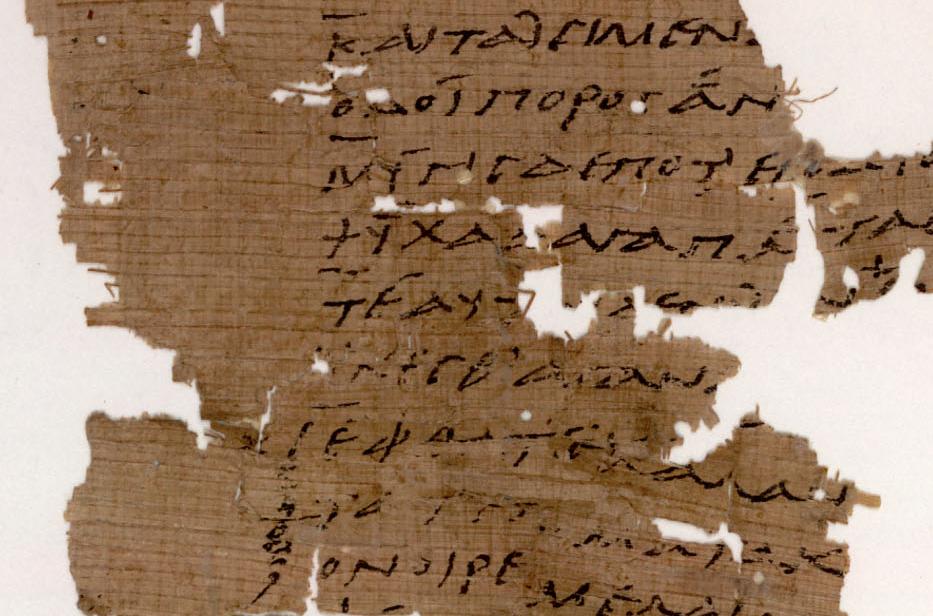 So the pink line ending in nu would match with τέαυτ in fr. 3 col. ii. But I see no nu to the left of that. Yeah well, dumb me, the purple lines are middle, they can't join with blank ends. 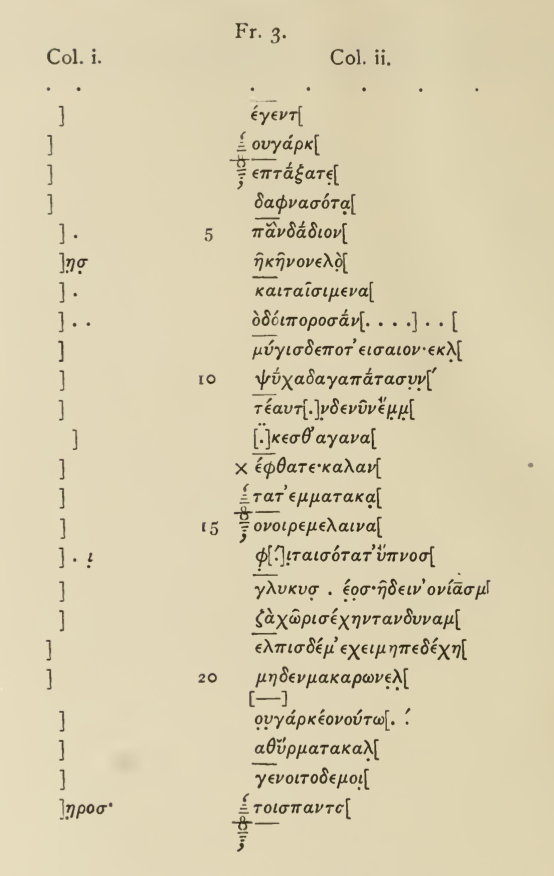 The nu I thought I saw before is where they read ". I". The "." is potentially the top of a vertical leg, which would mean II or N or M. It could be argued that this is ". N", but the right half of such a nu would be so faint I can hardly support it.

It would actually look like the ΗϹ line in col. i should join with l. 6 of P.Halle, where the book by Ferrari ends with θελήσηις while the anthology's text didn't get the memo and still ends in θελήση[ς. This would mean the vestige in the next line is treated as an iota, which can be supported, and the two vestiges in the line after that are dismissed. This is kind of not really supportable IMO. Treating the vestige before the HC line as a high dot, perfect. Problem: this makes P.Halle join perfectly with fr. 3, leaving no lines above it. So… where are these lines from again?

Hmm, I guess this isn't really an answer… this origin isn't convincing at all. Basically, the only convincing joint eliminates any trace of those pink lines because, while fr. 3 extends 2.5 lines higher than its first transcribed line, those lines don't show any trace of ink to my eyes. Plus, the length of the lacuna is completely unjustified.

The answer is presented in this other answer of mine.

4
About supplemented word ὀλόφῳ in a fusion of Lobel-Page fragments from an Italian Sappho anthology
4
About P.Oxy. 1787 fr. 9
2
Two Sappho-related reference requests

3
About the Sappho fragment containing Doricha's name that was found first (Campbell 15, Edmonds 37)
3
About Sappho 16, ll. 6-9
4
About P.Oxy. 1787 fr. 9
6
Identifying corrupted Sappho fragment or mention of Sappho found in just-newly-found-online Spanish edition of Sappho
2
Tracing apparent book-IV colophon not found in Voigt but found in a Spanish Sappho book based on Reinach's French edition
2
What papyrus is this?
4
About supplemented word ὀλόφῳ in a fusion of Lobel-Page fragments from an Italian Sappho anthology
2
Two Sappho-related reference requests