Abbreviations used by Romans in their inscriptions

While watching a documentary, I came across this Roman tombstone of three Jewish freedmen (below is the image): 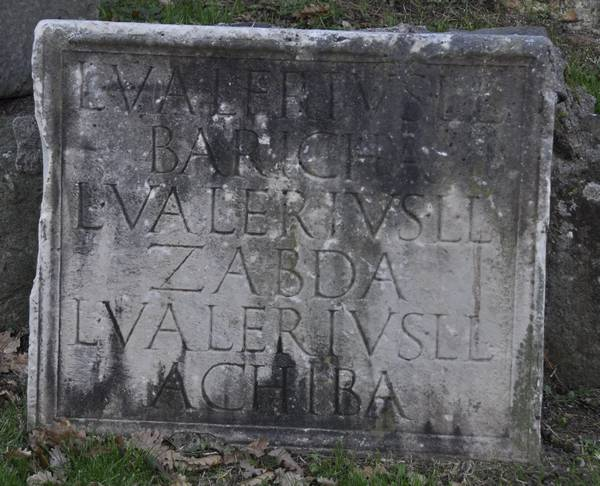 The expanded transcription available online is,

My question is - How to know which 'L' is to be expanded into which word?

To some extent, I'm clear about the first 'L' (Before 'Valerius') since it was a commom first name in Rome. But the last two 'L's are puzzling me.

This is a list of three names of freedmen (former slaves that were released by their master).

Without going into detail about how these names functioned, the first part, the praenomen, was picked from a very small list. In classical times there were only 18 known praenomina, and most of these were rare. More than half of all Romans (as far as we know) were named Marcus, Lucius or Gaius. Add Publius and Quintus, and you've got three quarters of the male population! Because this was so, the praenomen was generally abbreviated. There was a standard set of abbreviations that was very consistently adhered to. You can find a nice list of Roman praenomina, including known abbreviations, on Wikipedia.

This is how we know the first L stands for Lucius.

Slaves had only a single name, which was often Greek (whether the slave was from Greece or not).

Now when a slave was freed, he received a full name befitting a free man. Generally speaking, he adopted the praenomen and nomen gentile of his former master, and used his former slave name as his cognomen. So, when (say) one L. Valerius Flaccus released his slave Baricha, the newly minted freedman would now be named L. Valerius Baricha. But lest anybody forget that he was a freedman, the term Luci libertus (freedman of Lucius) was inserted before his cognomen. Since this was very formulaic—the usually abbreviated praenomen always followed by the same word libertus—it was generally abbreviated. So you had L. L. for Luci libertus, M. L. for Marci libertus, etc. So his full name was: L. Valerius L. L. Baricha.

For freedwomen, it worked similarly, except they had no praenomina (and the second L stands for liberta, of course).