What is the meaning of "Ex Lux", the name of Lucifer Morningstar's new bar?

I've been a fan of Mike Carey's Lucifer comic series, for its believable portrait of a fallen angel. The series spun off from Neil Gaiman's The Sandman, which established this incarnation of Lucifer Morningstar.

In short, Lucifer gets tired of the role given to him by God, so he abandons Hell and opens a piano bar on Earth called "Lux" (best in LA!). I know "lux" means "light", so this one is ok.

Now there's a new Lucifer series, set right after the previous run. In it, Lucifer returns to Earth and opens a bar called "Ex Lux": 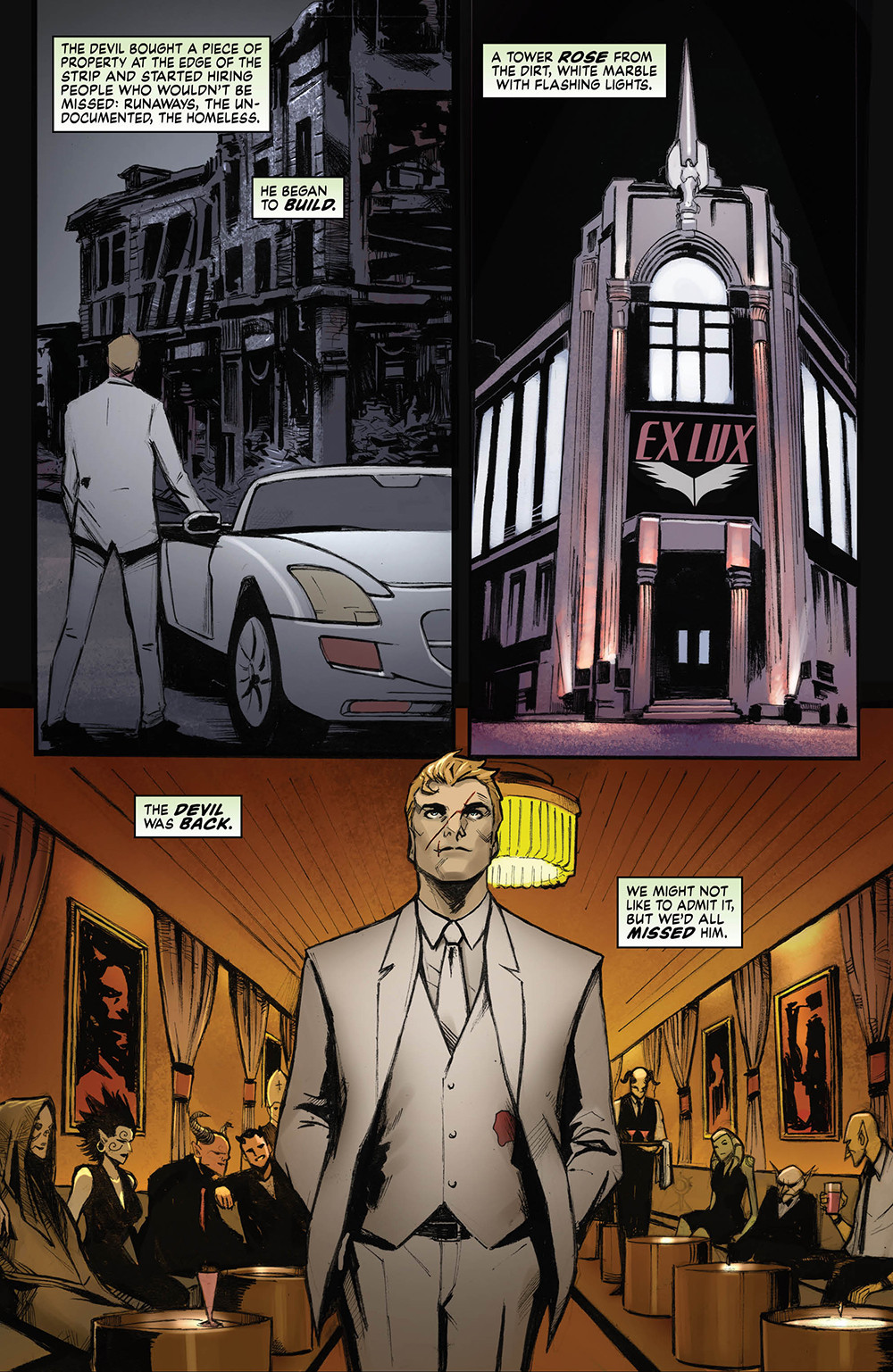 I'd have missed him, had I not read the original series right before reading this one :D

What does "ex lux" mean? This website says "lightbringer", and I'd be inclined to believe it (because Lightbringer is Lucifer official title), had it not listed "machine translation" as its source.

I could try to scrape the barrel of my Latin knowledge, and suggest that it means "from light" - using "deus ex machina" as a reference point - but I don't dare.

Instead, I'm asking here: what does "ex lux" mean?

Lux can mean "light", and ex can mean "out (of)"; but that sign is wrong. The grammar is impossible; you can't just combine words like that in Latin.

To give you a feel of the type of wrongness, consider a sign in English that said "Of She". That would sound almost like gibberish. It should be "of her", and even then it could mean many things.

Likewise, the Latin E(x) Luce would mean "From (the) Light", but *Ex Lux is just not possible without an extremely unlikely context of far-fetched, extensive ellipsis.

Ex lux gives you exactly 0 results from the HP Latin corpus, and the same applies to e lux.

Ex Lux is a fun name for the character's bar. I think the use of the Latin is meant to be playful. (And yes, I know the Latin is not correctly formed according to Latin rules, even medieval ones.) The main character's name is Lucifer Morningstar and I'm guessing he's a night owl. Lucifer means light-bringer, of course.

Ex Lux sounds cooler in English than e luce for out of the light or from the light. I think so, even though I love Latin and this is not quite proper Latin. I think maybe ex lux is also playing on de luxe from French. I don't know the comic, but suspect lux as a double entendre here for both light and luxury.

Ex lux could be an English shortening of ex luxuria -- from luxury and in English still carry the meaning light. Many people know the prhase Fiat lux. Let there be light, so lux is familiar to some ears.

In Latin luxuria means luxury in our sense, but also extravagance, excess and even reckless living. Cicero contrasts luxuria with parsimonia (frugality, thrift).

As pointed out in other answers, it's not good Latin. I assume (I hope!) it was not meant to be, either.

In my interpretation the "ex" is just the English word, so the name "Ex Lux" means "Former Lux". This is similar to how "ex-girlfriend" means "former girlfriend".

However, I believe the allusion to Latin is fully intentional. The original name "Lux" is indeed a Latin word — and lux is what a lucifer carries. I assume "ex" also has its origin in Latin, but I don't think the two words try to mean anything together in Latin. The two words have a Latin origin by they were put together in English, not in Latin.

The name looks better to me without a hyphen. This spelling variant also gives a more Latinate feel to it. Business names and proper spelling don't always go together, unfortunately.

Ex lux doesn't make any sense in Latin. E(x) is generally followed by an ablative, and drops the x when before a consonant. Lux means light, or, per William Whitaker's Words, also daylight, light of day, life, world, and day. E luce would mean either out of or from light. So, it would appear to be an error if it is supposed to be Latin.

I don't think Latin has much to do with it.

"Lux" is simply a shortening of Lucifer.

And the "Ex" is more likely to be of similar meaning to the prefix of ex-wife, ex-boyfriend, which is used to signify "former". (Incidentally, it does have Latin origins).

It is the Ex Lux, the former Lucifer. "The Devil is back" as the comic strip noted.