What is the "economy principle" in papyrology exactly?

I have come across the phrase "economy principle" somewhere I cannot recall, talking about why some combinations of papyrus fragments were made. What is this principle exactly?

As I typed it, I was on my mobile and close to bedtime, so I couldn't look for my source. Right now, I opened the book "The newest Sappho" by Anton Bierl and André Lardinois, which I suspected to be the source, and found the following quotes:

Only the fragments overlapping with Sappho fragment 9 did not seem to fit physically or textually into this sequence. M.L. West posited on grounds of economy that it should be placed in the missing column between fragment 5 and the Brothers Song. (p. 40)

Whether πότνιαι or πόντιαι, it is significant that the placement (indepen- dently, on physical grounds of fiber-matching and the principle of economy) of this fragment at this point in the sequence—results in a continuation of the alphabetic sequence of poems by first letter of incipits in π- (p. 41)

So that's where I found this principle mentioned.

I wonder if this "principle of economy" concerns the text rather than the physical papyrus itself. That is to say, it is perhaps a principle of textual criticism rather than papyrology.

I say this because that was more M. L. West's field (please see edit below) and also because the excerpts you give seem to draw a distinction between the physical aspects of the fragments and this economy principle. Indeed, the argument being made hinges on the agreement between physical and textual clues.

Having read the chapter you cite elsewhere, I understand the argument being made is that Sappho's poems were organised alphabetically (hence the discussion about the incipits). To this end, and this is only a guess on my part because I cannot find a tidy definition anywhere, the principle of economy may be something like another term used in textual criticism, lectio brevior - the shorter reading [is the more likely] (cf lectio difficilor potior - the more difficult reading is the stronger).

Which is to say, perhaps M. L. West's idea is that the fragment in question most easily fits into the alphabetic sequence as anywhere else, given that there is so much evidence that this is indeed the arrangement. Perhaps the principle of economy is a sort of Ockham's Razor where "one should select the solution that makes the fewest assumptions".

Edit: for those interested and with journal access, the M. L. West article cited in "The Newest Sappho" excerpt above is "Nine Poems of Sappho", in Zeitschrift für Papyrologie und Epigraphik, Bd. 191 (2014), pp. 1-12. His only reference to "economy" is as follows: "When such large pieces from these columns are preserved, it would be a little surprising if there were no remnant of column v. It is economical to suppose that P.GC fr. 1 is in fact from that missing column." (p. 2)

Note that West's article is indeed an extended piece of textual criticism. Further, this quotation highlights how this "principle of economy" is an educated guess, much like both lectio brevior and Ockham's Razor.

Here’s my original suggestion - once again, this is my guess, and it can be wrong.

Economy might stand here for the most efficient use of space/materials/other resources at the disposal of the scribe because, as Roger Bagnall puts it,

"the labor involved in making papyrus was considerable, and its price was therefore significant, most typically several days' average worker's wages for a roll" (Bagnall 1995: 13).

Economy in this context could be the well-known, general principle of economy from linguistics (Passy, Martinet, Tauli etc.) - a possibility which I initially discarded as the most obvious.

E.g. Valter Tauli argued that an ideal language "must contain the maximum possible economy which is compatible with the absolute clarity and necessary expressiveness."

In this sense, economy means economy of linguistic forms, its purpose is to ease the unnecessary burden - both mental or physical - both for the communicator and communicant.

I have to admit, I don't know. I've done some research and I am not entirely sure. So, I offer two explanations - in two different answers.

The principle of (formulaic) economy

As Russo reminds us,

"Anyone who reads Homer in Greek becomes eventually aware that repetition is constantly at play, some of its forms being more immediately evident than others." (Russo 1997/2011: 252)

Originally, the formula was understood as "a group of words which is regularly employed under the same metrical conditions to express a given essential idea" (Parry 1928, 1930), and that formula should be "made up of at least four words or five syllables, with the exception of noun-epithets, which may be shorter" (Parry 1971: 272, 275 n1, as cited in Russo 1997/2011). Here's a screenshot of a relevant section from Finkelberg 2012: 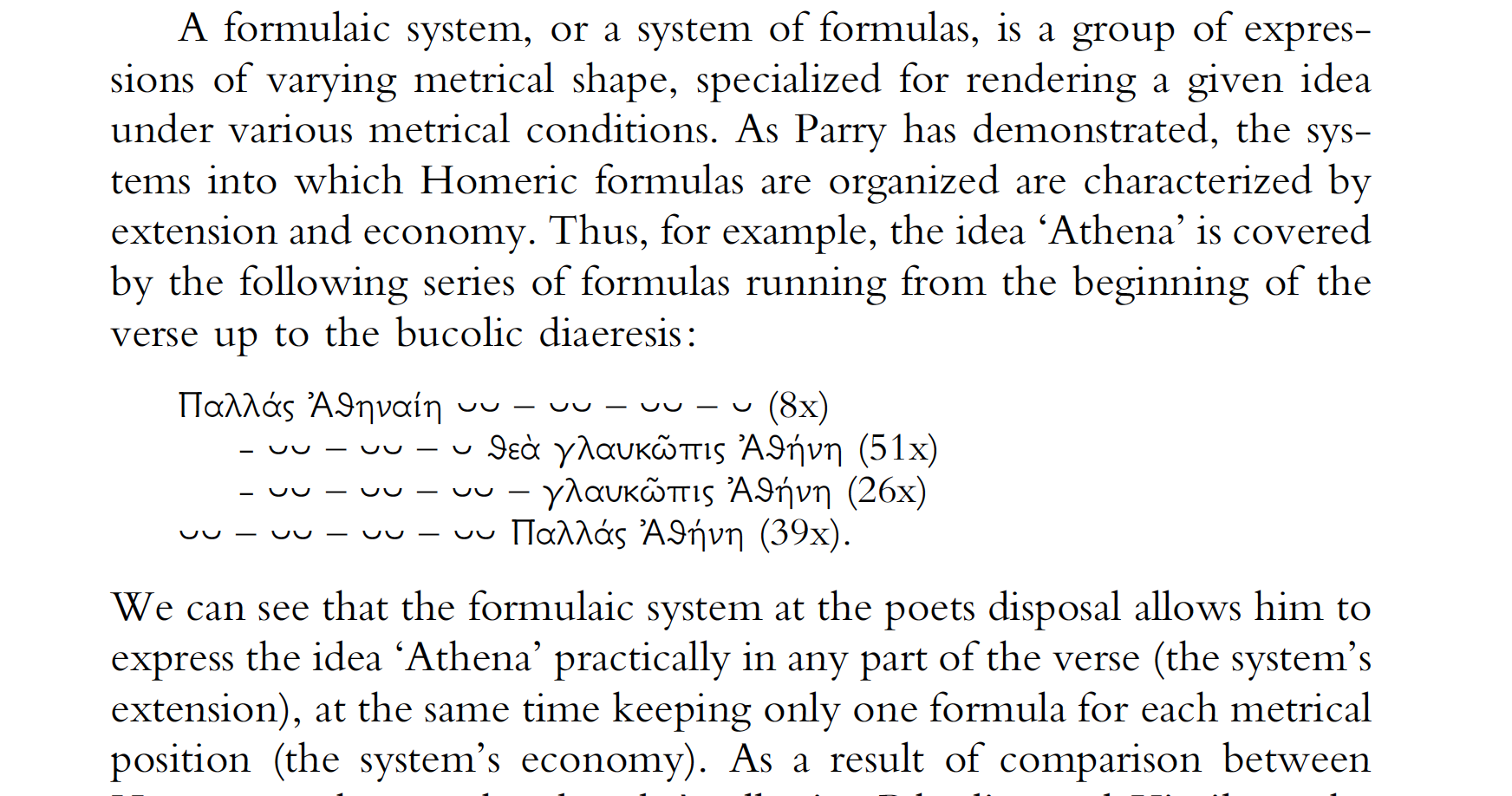 Later the definition of the formula was revised to "a repeated word group" where "the use of one word created a strong presumption that the other would follow" (Hainsworth 1968, as cited in Edwards 1997/2011: 265; emphasis mine - Alex B.).

The current consensus seems to be that around sixty-seventy percent of Homeric diction is formulaic. Finkelberg 2012 adds that the formulaic and non-formulaic elements were mutually complementary.

So, what is this principle of economy proposed by Milman Parry?

"By economy Parry meant that generally only one epithet for a character or object was available to fill each common metrical space," [emphasis mine] thus

"The same forces which created the poetic epic language of Homer created the poetic lyric language of Sappho and Alcaeus. […] Yet while we may feel some doubt as to the way in which they made their verses, there is not the least doubt that their poetic language was drawn from an oral tradition: only in an oral poetry does one ever find such a variety of forms that have each one its own metrical value." (Parry 1932: 29-30)

"The majority of Homeric and later poetic repetitions (actually the whole corpus of hexametric poetry (Epic Meter) in Greek, and still further in the lyric and choral poetry) can be defined as more or less formulaic." (Létoublon 2013)

"From beginning to end, then, Sappho 1 is a work wholly indebted to oral traditional poetic techniques in terms of its phraseological thematic structuring, its rhetoric, and even its extralexical encoding of formulaic phraseology, and it was the combination of Sappho's individual poetic talents with these traditional possibilities that imparted such a powerful impact to her verses." (Garner :334)

In a review of Diodoro Siculo: Biblioteca storica: libro XIII: commento storico. Storia. Ricerche by Catherine Rubincam we can read the following:

"In addition, brief general treatment is given here to some subjects of importance to the whole commentary on this book, principally, Diodorus' sources and how he used them. Ambaglio reiterates the traditional judgment that, as an "epitomator", Diodorus observed 'an iron-clad principle of economy' in the use of sources, "almost never us[ing] more than one source at a time" (IX)" [emphasis mine - Alex B.].

A little bit further we encounter a more revealing passage:

"Ambaglio's statements on this subject seem to me too rigidly dogmatic: first, "On his method of working with the sources, it is my opinion . . . that he [Diodorus] applied an iron-clad principle of economy, or rather of saving himself work, in accordance with which an epitomator . . . almost never uses more than one source at a time;" and then, more specifically, 'it is not the practice of an epitomator to have on his table two rolls of history at a time'" (IX) [emphasis mine - Alex B.].

Not the answer you're looking for? Browse other questions tagged terminology papyrology or ask your own question.

9
How does the gerund 'bear' or 'carry'?
9
What exactly is brevis brevians?
10
What does this bit of papyrus say?
7
What is the difference between a roman ("novel") and a "Milesiae fabula"?
10
Exactly what is a declension?
2
What papyrus is this?
0
Why was the subjunctive mood 'so called because the Greek subjunctive mood is used almost exclusively in subordinate clauses'?
14
What should the corona virus be called in Latin?
1
What is the name of the thing that the tongue does on the trī part in the word patrī?