How do the statistics definitions of 'accuracy' and 'precision' relate to their etymons?

1610s, "done with care," from Latin accuratus "prepared with care, exact, elaborate," past participle of accurare "take care of," from ad "to" (see ad-) + curare "take care of" (see cure (n.1)). The notion of doing something carefully led to that of being precise (1650s). A stronger word than correct (adj.), weaker than exact (adj.).

1630s, "a cutting off (mentally), abstraction," from French précision (16c.) and directly from Latin praecisionem (nominative praecisio) "a cutting off," noun of action from past participle stem of praecidere "to cut off, shorten," from prae "before" (see pre-) + -cidere, combining form of caedere "to cut" (from PIE root *kae-id- "to strike"). Meaning "preciseness" is from 1740. 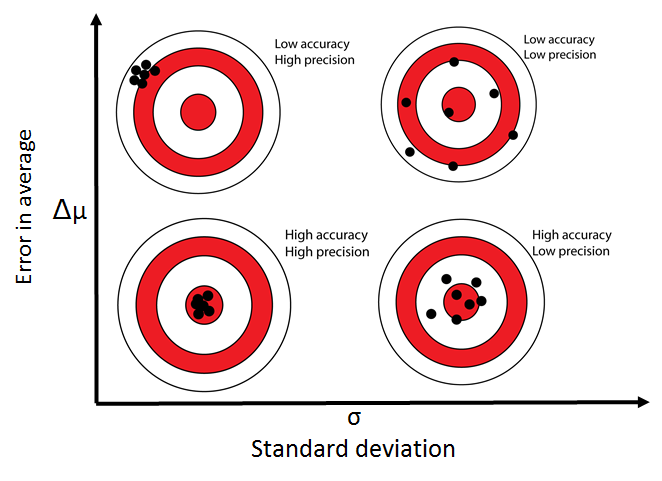 I'm OK with 'accuracy' as you see its etymology described in your question, but no amount of care will get the correct result if the method of getting it is biased. Accuracy and precision are almost, but not quite complementary. You can obtain a result, whether accurate or not, with great reproducibility, but you do need a word to distinguish the two and 'precision evidently got the vote.

I believe that use of the word 'precision' in modern science stems from the characteristics of Gauss's 'bell curve', which allow a mathematical estimate of it to be made. It was given an impetus about 100 years ago by Gosset's discovery of the (Student's) t-distribution, which allows real-world estimates not of accuracy, but of reproducibility, for which 'precision' is the preferred word. 'Precision' is a less cumbersome word than 'reproducibility index', which might be considered more appropriate; it is indeed quite neat in use, but it's a concept with a lot of mathematics behind it, and it would probably be hard to think of anything more apposite. I think we just have to accept what has come down to us for what it is, and forget the etymology!

Not the answer you're looking for? Browse other questions tagged etymologia statistics or ask your own question.

5
The meaning of common ground in appear/prepare
1
In Classical Latin, did the prefix 'de-' in 'deputare' mean anything semantically?
12
How do the verbs do and δίδωμι come from *deh₃-?
6
What does con- in “conceptus” mean? How does it relate to “a thing conceived”?
4
What is the relationship between “cut off” and “X-coordinate”?
1
Valerius and Valentinus have the same root?