How to say "search warrant" in Latin?

In law enforcement (and the judicial system in general in the U.S.) nearly every legal process has a Latin term. Although, one has escaped us and our legal staff. Our agency is looking for a Latin term that would best describe a Search Warrant for Digital/Virtual Data maintained in another state (location that is). A term that encompasses what is obviously not tangible like paper or articles — but, well, virtual...

In other words I'm looking for something that means, "an order (from a court) to search and deliver intangible electronic (digital) information stored on a computer far way".

I'm not aware of a Latin word for a "search warrant" in general, but an "arrest warrant" is known as a capias: literally, "you should seize [this person]". In Latin it's a verb, but it's used as a noun in English, like with habeas corpus ("you should have the body"): officially it's probably something like "a writ of capias".

So perhaps we could call a search warrant an inquiras, "you should search for damning evidence". (The verb inquiro means to search for something in general, but it was also a legal term, when a prosecutor searched for evidence against the defendant.)

The "virtual" part is a bit harder, since the Romans didn't have computer files. Virtualia are literally "virtual things", or you could go with electronica, "electronic things"; neither would make sense in an ancient Roman or mediaeval European court, but I don't think the concept would either. For an English-speaking audience you could even use data, but in Latin that's literally "the things that have been handed over", which is totally different in a legal context—if you're carrying out a search warrant, the user probably isn't "handing over" anything willingly.

Whichever noun you choose, I'd put it after the verb, on the model of habeas corpus. So your warrant might be, perhaps, "a writ of inquiras virtualia".

It seems perquisitio is a Latin term that might be associated with a Search Warrant. At least that is the term that this encyclopedia of Roman Law associates to the expression "search for stolen things".

Notice the Italian for Search Warrant is Perquisizione, derived from the related Latin term (similar in French). Meanwhile, the OED gives the English term "perquisition" (also from the Latin) the meaning of a formal search too:

A thorough or diligent search, especially one made officially; careful investigation or inquiry; (Law) a search of property to find a person, incriminating documents, etc.

a thorough search
specifically: a search by warrant 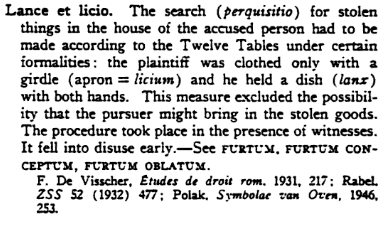 (literally 'search with dish and girdle'). In Roman law, this referred to a formal house search (described in Fest. 104; Gai. Inst. 3,192,193; Gell. NA 11,18,9; 16,10,8), conveying to a thief the status of a fur manifestus (a 'manifest thief' or a thief 'caught in the act'); even as early as the 2nd cent. BC, it had already fallen out of common use. The ritual in which the searcher had to appear naked, equipped with lanx and licium, had already become incomprehensible to ancient commentators (Gai. loc. cit. 'res tota ridicula', 'a totally ridiculous affair'). Despite various attempted interpretations (tools to carry any stolen goods that may have been found; magical or sacred relics of an ancient sacrificial ritual, and most recently [1. 177]: measures of capacity and length in order to record and assess the stolen goods), it will probably no longer be possible to identify its original purpose.

Not sure if relevant or not, but here is an academic article in German entitled Lance et licio, published in the journal Usus Antiquus Juris Romani (so might be pertinent). It requires subscription though.

So, in conclusion, perquisitio might be enough for a general term. Lance et licio is clearly an idiom which literally makes no sense in your context, and yet seems to be an established Latin idiom for exactly what you want.