Why is Descartes Latinised as Cartesius?

The famous French philosopher Rene Descartes is Latinised as Renatus Cartesius. Those unfamiliar with this, or with his thought in general, might then not realise that some words are derived from his name. For instance, Cartesian is a common term used in philosophy and mathematics (e.g. Cartesian dualism and Cartesian system of coordinates, respectively).

Why is the Latinisation of Descartes Cartesius? In particular, where is "Des"? Is it omitted because Descartes is literally translated as "of the + card/maps", and Latin generally omits prepositions? It seems however that cartesius is not a Latin word (although charta and carta are).

Is this Latinisation style common? Notice that, for example, the Dutch painter Vincent van Gogh is translated as Vincentius van Gogh, even that van also means "of/from". Miguel de Cervantes (contemporary with Descartes) is another example where the "of" is not omitted. Is there a rule here or is this just arbitrary?

Many European last names have some kind of "of" in them, like the "des" of Descartes. In Latin this is most naturally expressed with a derivative. This goes with many kinds of titles with an "of"; for example, I would translate "Caesar of Rome" as Caesar Romanus.

As Alex B. comments under another answer, de Montaigne ("of mountain") was Latinized as Montanus. When it comes to the Latinization of a specific name, I can only guess, but it seems to me that "of Cartes" was Latinized as Cartes-ius. This sounds very natural in Latin.

There is a lot of variation in Latinization of names, and there are no hard rules. However, one can try to understand patterns and common processes. There are multiple ways one could have Latinized the name Descartes — or Des Cartes; many French names seem to have shifted to being spelled together at some point. One could have analyzed the name further and observed that the French carte comes from the Latin charta, and from there one can derive Chartarius. One has to balance between good Latin style (as sensed by oneself and the community), ease of understanding, and existing traditions.

To put a bit of a point on the accepted answers telling you that there was no fixed convention, perhaps it's worth pointing out that not even "Cartesius" was consistently used. In the original 1641 title page for Descartes' Meditationes, for instance, note that the French name is hyphenated but otherwise untouched: 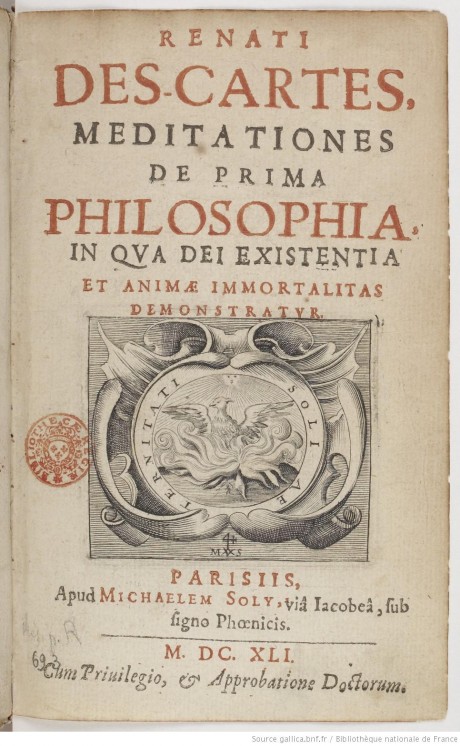 There is some arbitrariness in the practice, but Latinization of names was normal until at least the 17th century, but the more modern pattern is to leave surnames un-Latinized. Thus, van Gogh's name is left alone. The Wikipedia article on Cervantes proves nothing, since it also is modern. (Since Cervantes himself did not write in Latin, one can hardly expect to see how he would have it done himself.) Here are some examples:

Blaise Pascal (d. 1662) -> Blasius Pascal (I would have thought that "Paschalis" would have been the obvious Latinization)

Not the answer you're looking for? Browse other questions tagged names latinization or ask your own question.

7
Why does Parthenope refer to Naples?
14
Why is Jesus inflected in such a way?
9
Which is the logic behind “Aloysius” Latinisation?
7
Why didn't Byzantine emperors after Justinian II have a Latin name?
5
How are “Arsaces” and “Gotarzes” declined, and why?
4
Latinisation of a surname. Seeking advice from expert Latinists