Can someone explain the meaning of the words "SEVERA INDEOVI VAS" on this slab:

According to https://en.wikipedia.org/wiki/Depiction_of_Jesus, the above image is of an "Incised sarcophagus slab with the Adoration of the Magi from the Catacombs of Rome, 3rd century. Plaster cast with added colour."

Also, can someone tell me if the person on the far left side of the slab is supposed to be a 3rd century representation of a young Jesus?

This inscription does not use spacing to separate words. (Word division was often not marked consistently, or not marked at all in Roman inscriptions.) The second and third lines actually say "IN DEO VIVAS". "IN" is a preposition (meaning "in"), "DEO" is a noun ("god/God") in the ablative case, and "VIVAS" is a verb ("live") in the second-person singular present active subjunctive. This website gives the English translation as "May you live in God." "Severa" is apparently the name of the woman whose burial is commemorated by the slab.

I don't know whether the figure on the left is meant to be Jesus (if I had to guess, I would say no, though; my first impression is that it is meant to be a depiction of Severa). There is certainly a depiction of Jesus as a baby on the right side of the slab: he is being held by Mary. In front of baby Jesus and Mary (to their left on the slab) are the three magi bringing gifts; behind Mary (on the right) is another figure that I guessed was Joseph (but the author of the blog post that luchonacho found suggests that he is Balaam).

Sumelic is right. I just want to add a few things. First, the expression in Deo vivas and related (e.g. vivatis in Christo, "may you live in Christ") seem to be of common use among Christians of the period. For instance, it's also found in a ring saying "Antoni vivas in Deo" (it appears reversed): 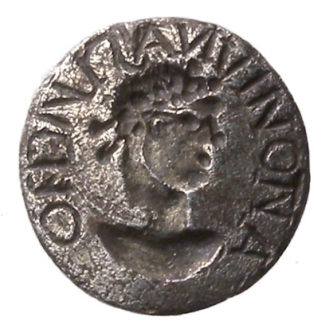 Other examples are cited here and here.

Interestingly enough, it seems a ring containing a similar expression (the so called "Ring of Silvianus", with the inscription SENICIANE VIVAS IIN DE) was an inspiration for J.R.R. Tolkien in his creation of the Middle Earth mythology.

Finally, regarding the slab in question, this site provides further speculation about the context and meaning of it. It does not mention anything about who Severa might have been though. Who knows, maybe it was Marcia Otacilia Severa, a 3rd century Empress of Rome, with the article suggests (without providing sources), could have been a Christian.