What does the “word origin” mean?

I have a dictionary app that lists “Word Origin” in the entry. The word origin values I’ve seen have been XXXAX, XXXBX and XXXCX. What do those letters represent?

Update: a screenshot for reference 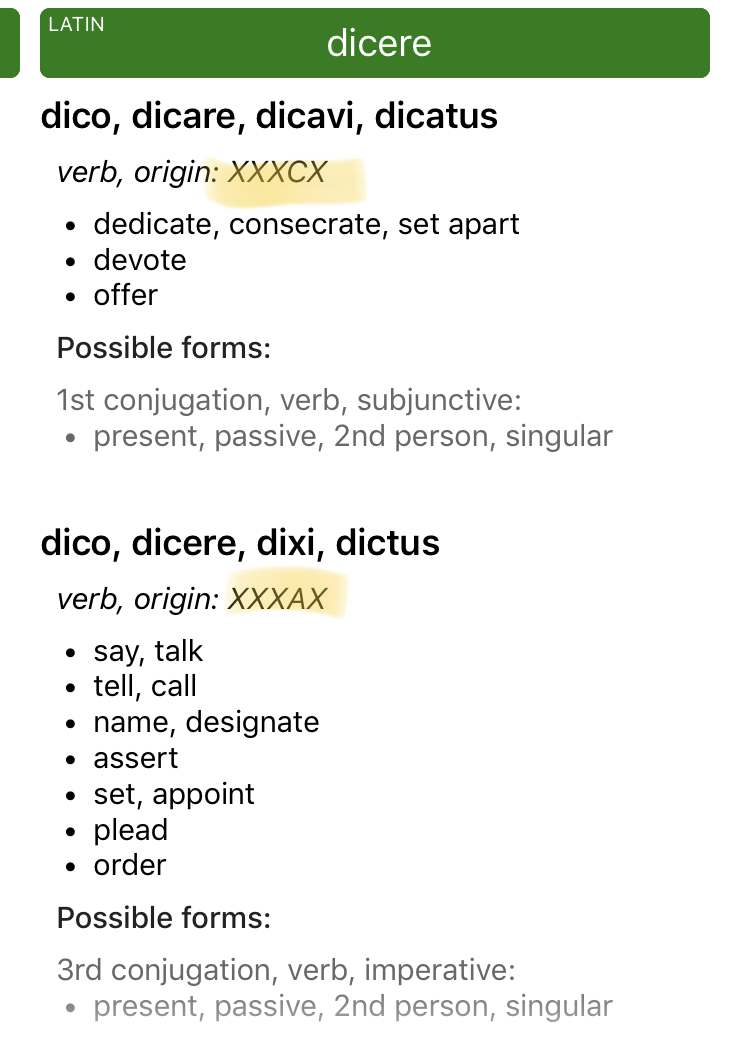 You can also see a number of examples here.

I'm going to take a shot in the dark and guess that you're using Whitaker's Words, since those look like Whitaker's origin codes.

Each letter in the code indicates something about the word: in order, they're AGE, AREA, GEO, FREQ, and SOURCE. The first indicates how early or late the word is attested; the second indicates what general topic it's related to; the third indicates where in the world the word was found; the fourth indicates how frequently the word appears in corpora; the fifth indicates which source Whitaker took the word from.

For all of them, a value of X means "not known" or "not applicable". So none of the words you've been looking at are associated with a specific time period, area of interest, or region, and Whitaker didn't note his sources for them. But the fourth letter tells you roughly how common the stem in question is: A is more common than B, B than C, and so on.

A full description of all the abbreviations and their meaning can be found here.

14
Abbreviations in Latin dictionaries, especially Lewis and Short
9
What does the "Lorem Ipsum" mean?
9
How to select dictionary translations
5
Niti and straining for a stool
9
Dictionary for New Latin words
6
What is L&S not good for?
9
Is there any database on idiomatic expressions in Latin?
2
Is the word nihilanus/nihilumanus properly constructed? (From "nihil/nihilum" meaning "nothing" and the suffix "-anus" to denote origin)
6
Why do some sources give the principal parts in a different order, or include an extra, fifth principal part?