What did σκάλα exactly mean in Byzantine Greek?

In Spanish we have a word escala that means "stopover" as "a break in a journey", specially when travelling by sea. According to the dictionary by the Royal Spanish Academy, the word comes from Italian scala, and this one from Byzantine Greek σκάλα skála meaning "harbour" (or maybe "port" as "city with a harbour"). But in a question a user commented (link in Spanish) that the word actually meant "berth" or "mooring" (as "the point where a ship moors in a harbour").

So what did the word σκάλα exactly mean in Byzantine Greek?

An entry from the magisterial Lexikon zur byzantinischen Gräzität:

NB: The LGB is "the foremost lexicographical resource in Byzantine Studies mainly covering the period from the 4th to the 15th century A.D. taken from more than 3,000 texts."

I think this entry in Du Cange's Glossarium ad Scriptores Mediae et Infimae Graecitatis is what you want. I find it a bit hard to make out the entire entry, but this excerpt in it seems relevant:

This describes an ὄρμος (whose meanings include such meanings as "cord", "chain", ... "moorings", "haven", according to L&S) as the part of the harbour where ships are drawn and tied (there are probably better nautical terms for this), and which the common people refer to as a σκάλα.

Here's an image of the entry: (The bit I've quoted above is the first bit of Greek you see in the image below.) 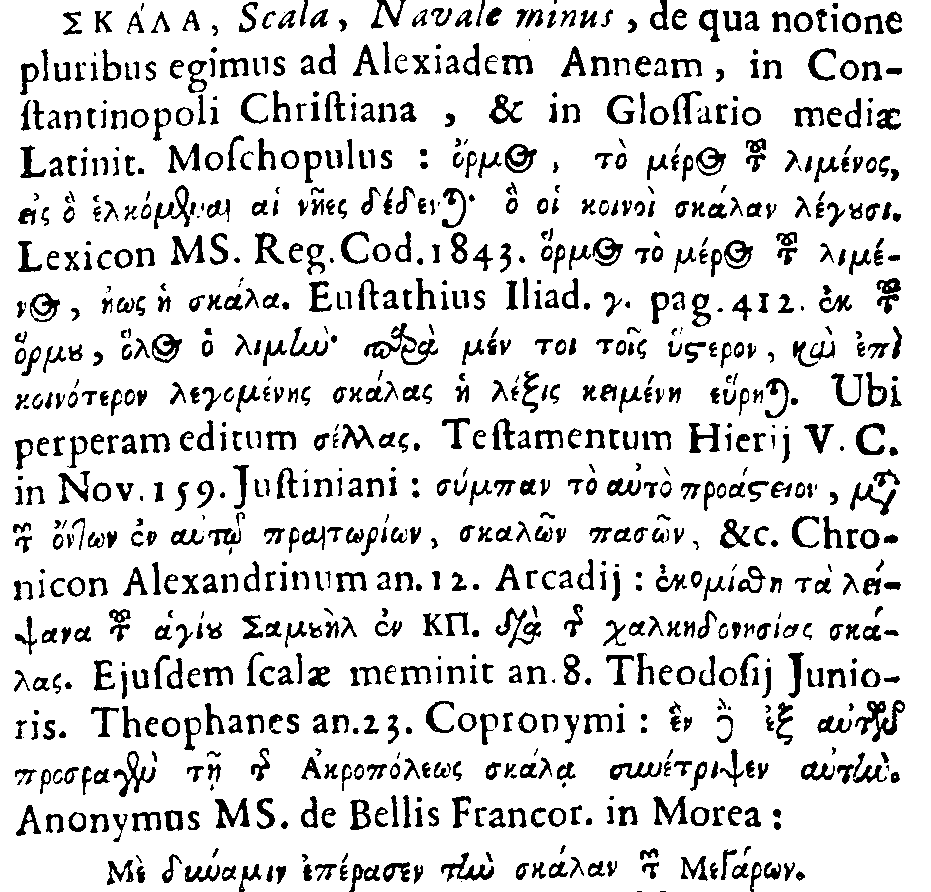 There are a few other points to note here.

(Tentative translation has been revised due to suggestion by TKR.)

It is a loan from Latin scala, "staircase, ladder etc." Like English "scale".

Not the answer you're looking for? Browse other questions tagged greek meaning noun spanish or ask your own question.

17
What colours did different colour words mean, exactly?
10
What does cōcutit mean?
4
What exactly are βροτολοιγῶ?
25
What did "actuālis" actually mean in Latin?
8
What does "dives fluminarum" mean?
11
Did "benedicere" ever mean "to blaspheme"?
8
Did the Vulgar Latin verb "toccare" exist?
7
What did "quid pro quo" originally mean?
4
Did "sanctifico" ever mean "to make the sign of the cross"?