What does memento mori actually mean?

I'm wondering what memento mori actually means. From Wikipedia, I see the meaning is "you must die" but that makes it sound like a threat. Legend said that one of the war prisoner use the word for mocking the Caesar.

Is there any better translation or meaning for it? Many Christian priests use it for Sunday service speech opening, to remind us that we're only mortals. So in my comprehension it means [remember that] "you/everyone will die someday". Is that correct?

"Memento" means "remember". Literally it's "remember to die", which means: "Remember you must die."

The Christian meaning is not just "remember you are a mere mortal", but especially "remember you will face Lord in the day of judgment". That's why this was the Cistercians' motto.

"Memento Mori" means "Remember you will die", however, it comes from a Roman Imperial custom and, only much later, became a Christian motto with a different meaning and goal. In early Imperial Rome when an emperor or General, would return to Rome after a successful campaign (military or political) he would cruise the streets on a chariot surrounded with an ecstatic applauding crowd. Behind him, on the chariot, a man was constantly whispering him: "Memento Mori". This was a rule and not a random event. Its reason: remember the hero that his life was just like everyone else, and to maintain the current success he had to be humble, honest and useful to the people of Rome and the empire.

Memento mori translates to "remember you must die". It is a medieval Latin Christian theory that focuses reflections on death not as a morbid practice but as an inspiration to truly live.

The philosophy intends its practitioners to live for a cause rather than in the pursuit of earthly goods as everything is temporary. It is also apt for the movie as the protagonist’s main reason for living is to avenge his wife and all his memories are temporary, allowing him to adopt any purpose he wants as long as it is based around vendetta.

Memento, the word, also means – “an object kept as a reminder of a person or event”. In the movie of Memento, the protagonist uses a series of written notes, Polaroid photos, and tattoos to constantly remind himself of his wife, the new stories he accrues, the people he meets and what his next step should be.

Consider "remember to die" in the sense that if you are a hero and invincible or immortal even, that there is a necessity for you to remember to die because death prevents you from becoming something unnatural or undesirable. For example if you send your soldiers on a suicide mission, they should not forget that they are supposed to not come back. This will lead them to a superhuman feat. Namely that in the most perilous situation, fear is wrong because it is not of their own choosing and only when they can choose their death, they must decide for it. I think "remember that you will die" is kind of a moot point.

Memento Memori coins or tattoos act as reminders to not obsess over trivialities, or trying to become famous, make more money than we could ever spend, or make plans far off in the future. All these are negated by death. It’s time we stop pretending otherwise. 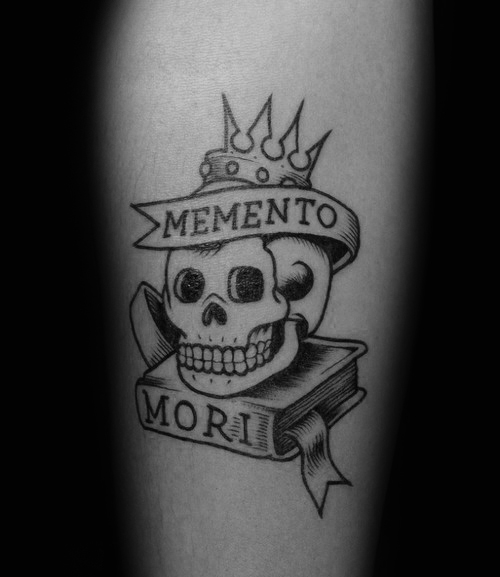 Not the answer you're looking for? Browse other questions tagged meaning definitions or ask your own question.

11
How do you translate "Don't Fear the Reaper" into Latin?
6
What is the best way to translate 'remember' into Latin?
10
Parallels for the infinitive in "memento mori"?
9
Variable Interpretation of Memento Mori
4
Memento Mori--Revisited
3
Memento Mori: Indirect Speech
2
Translation Request, English to Latin