Which online Latin dictionaries should I use and why?

What good online Latin dictionaries do you know? What are their benefits and drawbacks?

Please give only one dictionary per answer. If you have many dictionaries to suggest, give multiple answers — but read the other answers to avoid duplicating answers. This way people can vote on individual dictionaries, causing the best ones to rise up and the worst ones to sink down, so that we can easily find the most loved dictionaries. If there are many dictionaries listed in an answer, it's hard to link the answer score to the quality of each listed dictionary.

The best free, online Latin-English dictionary is undoubtedly Lewis and Short. There are several ways to access it, too, and they are given in separate answers.

Most people seem to go straight to Tufts' Perseus website, which has the Lewis and Short in its entirety. As it provides a direct link to each word, this is a great way to link someone to a definition. Moreover, their Morphological Word Study Tool is a god-send to any new student, and it also has morphological analysis for Ancient Greek, Arabic, and (new!) Old Norse.

For just dictionary-entry look up, it's probably not the best interface. It's rather slow, for one.

For more thorough comparisons with different Latin dictionaries, including the Latin-Dutch dictionary LaNe, one can use Chicago's Logeion. You can type in either Latin or Greek (transliterated or unicode) and it will bring up a drop down menu for you to select the word (good for seeing a bunch of potentially related words very quickly). Besides LaNe and Lewis and Short, it also includes the Frieze-Dennison's lexicon to Vergil's Aeneid and, great for many members here, the Dictionary of Medieval Latin from British Sources for those special Medieval Latin words (e.g. dictamen).

If you're looking for an English-to-Latin dictionary, I recommend A Copious and Critical English-Latin Dictionary, by William Smith and Theophilus (!) Hall. The most recent edition was published in 1871, so there are lots of ways in which it's not really suitable for today: many English words have changed their meanings since then, and many more have changed nuances - I find myself referring to Google to find appropriately archaic English synonyms when looking for the modern word returns no results. However, it's still an excellent resource and the best source of synonyms and phraseology I've yet encountered. It's one downside, besides the archaic English, is that the difference between the synonyms isn't always explained clearly. You can access the dictionary as:

There's a reprint published by Bolchazy-Carducci.

I highly recommand Collatinus. There are a web version and a desktop version, and it's a free software (CC BY-NC).

It is very useful, especially translate from English to Latin or Latin English words. It can identify an inflected or derived form of a Latin words based on tables of conjugations and declensions it contains. Some forms it identifies as possible may actually be unattested or even impossible.

It is belonging to archives.nd.edu. That means University of Notre Dame archives. It also contains the Windows and Linux version of the original program.

Another online version is https://latin.ucant.org/

There are also excellently-reviewed mobile apps that contain William Whitaker's Words for Android and iPhone.

One possibility is to use Webxicon.

For some words you get use examples and pronunciation help.

There are downsides as well:

This dictionary is based on Wiktionary, which is not the most reliable of all sources.

One option to consider is the online Latin-English Dictionary. It is essentially an online version of William Whitaker's words, and uses the exact same word list.

(Full disclosure: this is a shameless self-plug for a side-project I worked on while teaching myself Python / Django.)

Here you can search Lewis & Short, Liddell Scott Jones, and a few other dictionaries. The layout is not as good as on Perseus, but it loads much faster, so it is what I use.

You have to create a new bookmark. Then use this as the url of the bookmark: http://archimedes.fas.harvard.edu/cgi-bin/dict?name=ls&lang=la&word=%s&filter=CUTF8

And this as the keyword of the bookmark: le (or pick some other keyword of your choosing: this stands for "Latin–English").

One option is Philolog.us which not only allows for quick looking up of entries in Lewis and Short, but also the Greek dictionaries Liddel and Scott's and Slater's Lexicon to Pindar. The big bonus for Philologus is its iPhone app. Sorry Android users, no Philologus yet, though one is in the works.

But now there is: https://play.google.com/store/apps/details?id=com.philolog.philologus&hl=en

I often use Numen, the Latin lexicon (latinlexicon.org). It is easy to use and allows searches for both Latin and English words.

Many entries have use examples, although they can be quite cryptic.

It also has a "word study tool" where you can enter a passage of Latin text and look at all possible translations word by word. This tool works because the dictionary can decline and conjugate all words (you can also see all forms of a Latin word in its entry), but unfortunately there seem to be occasional errors in irregular conjugation.

First of all, I must confess I don't know many. However, the one I commonly use meets my needs pretty well and isn't mentioned above: it is University of Notre Dame's Latin Dictionary and Grammar Aid.

Florin Neumann, who found the data on the Internet (...) says

http://latin-is-simple.com/ is a dedicated online dictionary that contains most latin words: 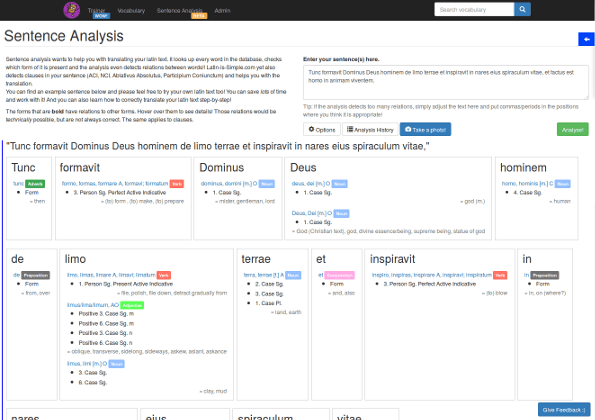 I have to add that I am the ambitious and proud developer of that site, so my opinion may be a little bit biased.. My site is only about one year old and has since been subjected to constant development and improvements and this will continue! Give it a try!

There's a widget that lets you look up any word in the Oxford Latin Dictionary.

It's the Oxford Latin Dictionary

It's behind a paywall (subscription-based) - available to institutions only.

There's a free YouTube tutorial that shows its functionality in all its glory.

I always use the site: https://en.glosbe.com/ I like the site because it has got more than 15.000 words, new and old Latin. It shows:

It's a great site, I recommend it.

Serious students should have at their disposal at least one Latin-Latin dictionary. The Forcellini Lexicon is an early modern edition that is still very useful.

Thesaurus linguae Latinae (TLL) is a Latin to Latin dictionary by the Bavarian Academy of Sciences and Humanities certainly has a prominent place in the list, in that it is the most exhaustive dictionary of Latin, and it is available freely online.

The -really relative- handicaps are:

So a great choice if your word is classical Latin and starts with an R or a previous letter, and you're interested in everything there is to know about this word.

It is accessible at https://thesaurus.badw.de/en/tll-digital/tll-open-access.html (contents licenced under CC-BY-ND-NC, free to use with attribution but no derivative works and no commercial use), and it also comes with a handy search functionality https://publikationen.badw.de/de/thesaurus/lemmata

General info and description of the work at https://blog.degruyter.com/thesaurus-linguae-latinae-how-the-worlds-largest-latin-lexicon-is-brought-to-life/ .

I know this is an old post, but I've just found this forum. For the possible interest of anyone else searching for a dictionary I'll offer this free one I did the ocr correction and formatting, etc.: https://github.com/TrentonJ/Cassell-s-Latin-Dictionary

Latdict is a free online Latin-English dictionary based on Whitaker's words. The biggest handy feature is, when searching by the Latin word, a dropdown displays suggestions with the standard forms of the word. It also has a work-in-progress grammar section.

french -> latin: Gaffiot, the old and the new (pdf below)

Benefits: both in french, gaffiot has illustrations and maps, both cover nearly all of classical latin. Have been the dictionaries by excellence for latin studies for all the french speaking world for generations

Drawbacks: both massive and awkward to handle and carry around

jclsource.org/dictionary is a good free Latin to English and English to Latin dictionary. It uses Whitaker's words as a database. The rest of the site has lots of good resources, and as a developer of JCLSource, I strongly recommend the site not only for the dictionary. We are still working on improving the dictionary UI and adding auto-fill, but this is still a comprehensive dictionary.

The Latin–Norwegian Latinsk ordbok : latin–norsk is available both in print an as an e-edition for those registered at a Norwegian university. But previous editions are available for free via Nasjonalbiblioteket for Norwegian IP adresses. It is a standard work used at Norwegian universities and sixth-forms.

It has a very long history, starting as ‘Rektorordbogen’ in 1887 (it’s actual name was simply Latinsk ordbog), and was the work of philologists and rectors (headmasters) Jan Johanssen, Marius Nygaard and Emil Schreiner. The current edition is headed by Roggen, Kragerud and Tosterud.

The current edition of the dictionary has had a much-needed overhaul, includes far more Mediaeval Latin than previously, and has updated it’s grammatical vocabulary to better support the expected knowledge-level of first-year university students.

Some online editions, all via Nasjonalbiblioteket:

As a sidenote: When your name is Pantzerhielm, you mean business.

Not the answer you're looking for? Browse other questions tagged resource-request dictionary or ask your own question.

1
What is the best online Latin dictionary?
81
What is Google Translate good for?
16
What is "Winter is Coming" in Latin?
8
Trying to translate "Master Thyself" into Latin
7
Help Translating English Book Title: "What matters most is how well you walk through the fire"
10
Mother Earth in Latin - Personification
10
Latin translation for "Remember calmness"
6
The Meaning of Scelerisque?
14
Abbreviations in Latin dictionaries, especially Lewis and Short
10
Could we say "dies mirabilis" as we say "annus mirabilis"?
See more linked questions

35
How can I study Latin on my own?
17
Where to find an online Latin text corpus and what can I do with it?
14
Abbreviations in Latin dictionaries, especially Lewis and Short
7
Resources for pronouncing Latin
8
What are the most important scholarly resources for Latin and Greek historical linguistics?
5
Online Latin Synonyms and Other Crossword Resources
6
What monolingual text editions are available?
11
Are there Latin grammars and dictionaries made for writers?
7
Resources for pronouncing Greek