Both the Latin and German equivalents are extremely similar to the English as well as to each other. This leads me to ask a couple questions.

I suspect somebody else will be able to give you a much more thorough answer, but the gist is that, though Latin and German are different branches of the language tree, they're still related.

The easiest way to think of it is that Latin and German are related from the same ancestor, Proto-Indo-European, which had the words * meH₂tér- and * pH₂tér-. (The asterisks mean that we have no evidence of the existence of those words, but working backwards from the languages we do have evidence of, we can say with some confidence that they probably existed.) Eventually, PIE split into several language families, one of which was Italic (and included Latin) and one of which was Germanic (and included German). The Germanic family continued to split until it gave rise to English.

The words for "father" and "mother" already existed in PIE, so they just sort of changed shape as the language evolved. (Actually, Wasser also goes back to PIE—Latin just happens to have a different word for it. Thanks to @TKR for the correction.)

Essentially, Latin is sort of an aunt of German and English, which are sisters. (Thanks again to @TKR for the correction.)

As far as I know, both "mother" and "father" are old Indo-European words that have been traced all the way back to PIE. Both Italic and Germanic languages took these words, and both words ended up in Latin, English and German. So:

First time poster here. I was reading about PIE a couple of days ago, and found this nice image (via http://mentalfloss.com/article/68281/evolution-two-indo-european-language-family): 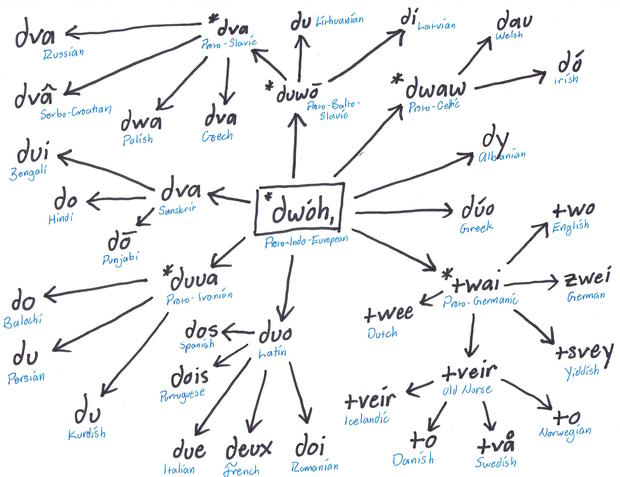 Which explains how, from my part of this world, we got the word 'dua' as the number two.

I do not have the corresponding image for "mother" or "father", but the idea is the same: "two" does not come from the Latin duo or German zwei, but they all come from the same word in PIE.

Not the answer you're looking for? Browse other questions tagged etymology or ask your own question.