Semantic differences between verbs of thinking

Latin has lots of verbs which can be translated as "think", including puto, opinor, arbitror, existimo, reor, censeo, cogito, and doubtless many others.

How might one get a handle on the semantic nuances that distinguish these verbs? Ideally, I'd like to be pointed to a discussion of all the most common of these verbs with usage examples, but answers focusing on specific verbs are also welcome.

Champneys/Rundall have a good run down of the words. They break them down into four categories:

Think = to have an opinion

= to have an opinion and express it—

= to think over, reflect upon—

= to think of doing something—

I find the category between the first and second arbitrary, as arbitror, credo, and opinor all have been used for expressing opinions. The distinction between think = have an opinion and think = reflect upon is very important though. Notice the lack of overlap.

The latter category is made up of various shades of reflection, which should be easy to figure out by using a dictionary.

The former category, though, has important distinctions in itself. Credo, for example, has been used in Christian literature (and elsewhere) to indicate a strongly held belief. Meanwhile, arbitror originated from the idea of a judgment based on evidence (thus an arbiter is a judge of sorts, someone whose opinion is based on observation), and existimo has a value aspect to it. The verb for "I think this is enough water to add" would use the word arbitror while someone saying "I think this is worth one denarius" would use existimo. Both are opinions, but they're used differently.

Of course, over time, these often get mixed up and used as synonyms, but some of the original definition is felt.

Some other notes: reor is closer to existimo in needing calculations, which censeo originally had, too. Opinor is closer to arbitror, but seems along with puto and censeo to connote one's own personal opinion the best. Puto also had a "reckoning" sense, especially when used with ratio, however, it too is most often used purely of a personal opinion. Puto is probably closest to the thought equivalent of dico.

I'll offer a few thoughts gleaned from the entry for glauben in Georges: kleine deutsch-lateinisches Handwörterbuch and from Smith's Copious and Critical English-Latin Dictionary. (I'd quote and translate, but my German, while good enough to get a general sense of the text, is unequal to anything like a satisfying translation.)

(This is only a partial answer so far.)

Joseph Denooz (Denooz 2010) gives the following frequency data for the verbs mentioned in your question. 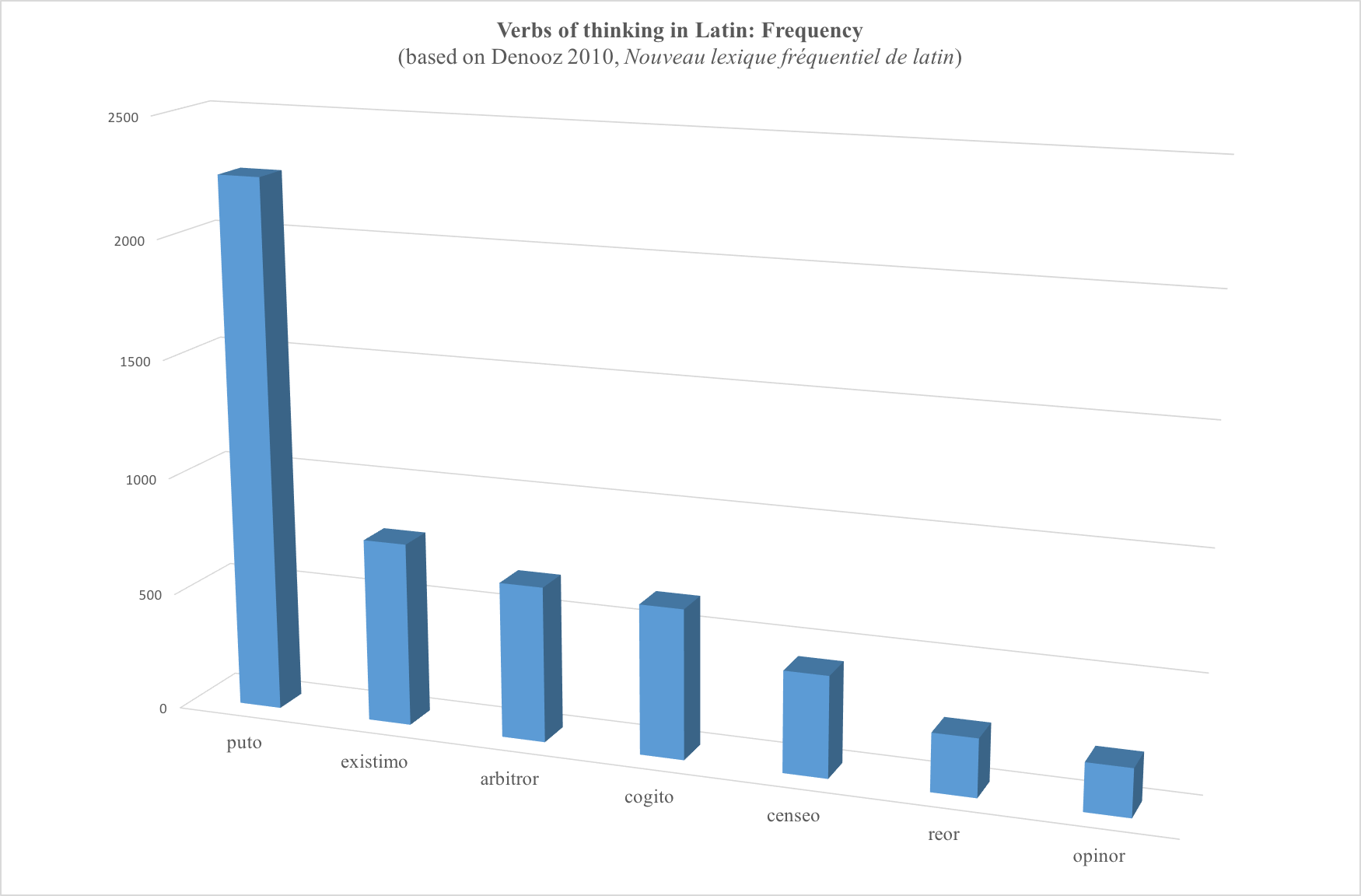