Which are the longest words in Latin?

Today I was reading 1 Samuel 5 in the Vulgata and in verse 9 these two words are found:

which surprised me for their length (16 and 15 letters respectively). So, which are the longest, attested words in Latin? Is Honorificabilitudinitatibus the longest? (27 letters...horrible word, btw) Which are other examples of very long (say, +25 letters) words?

Your word, honorificabilitudinitatibus, seems to be commonly regarded as the longest, and it has the distinction of being used by Shakespeare.

However, there's also this one with 28 letters:

which is the action or habit of estimating something as worthless.

Although the latter is longer by one letter, it was coined by students at Eton College as a humorous word. It can be broken down as follows:

Given that floccinaucinihilipilificatio is of late coinage, I believe that honorificabilitudinitatibus is most likely the winner. Besides being used by Shakespeare, it wasn't coined by him. Rather, it appeared long before his day, such as in the following dictionary entry by Johannes Balbus in 1286:

It is a word for an overly discerning critic and may perhaps be translated as raised-eyebrow carver (from subducere = raise [actually a rare meaning], supercilium = eyebrow, carptor = food carver).

OK, it's a bit of a joke word that was never in common use. It occurs in one place only, and then it is not really used either, just quoted.

The word was presumably coined by the somewhat mysterious poet Laevius from the second century BC, of whom only scant fragements have survived, but the actual source is Aulus Gellius: Noctes Atticae, book 19, where A. G. reports on the style of Laevius and his proclivity for coining original expressions. For he had attended a reading of Laevius in the house of one Julius Paulus together with his companion Julius Celsinus, and on their way back the two reminisced on the various “Laevian” coinages they had heard, and pondered which of these they might adopt for their own use. After giving a number of examples, Aulus Gellius concludes:

Other words namely, that seemed too poetical and inappropriate for use in prose, we passed over; one example was that he called Nestor “trisaeclisenex” and “dulciorelocus,” likewise that for high-rising and great rivers he spoke of “fluctibus multigrumis,” and said that rivers that are frozen solid are “tegmine onychino,” and what multi-part words he playfully put together, such as that he called his critics “subductisupercilicarptores.”

First of all, with all due respect, this word is not Classical Latin; it’s a Medieval Latin neologism (a nonce word) that was occasionally used solely because of its length.

Secondly, honorificabilitudinitatibus is technically a word form, not a word (i.e. it’s not a lexeme).

Afaik, it is first encountered in a treatise written by Peter of Pisa, an eighth century Italian grammarian, who, incidentally, taught Latin to Charlemagne. 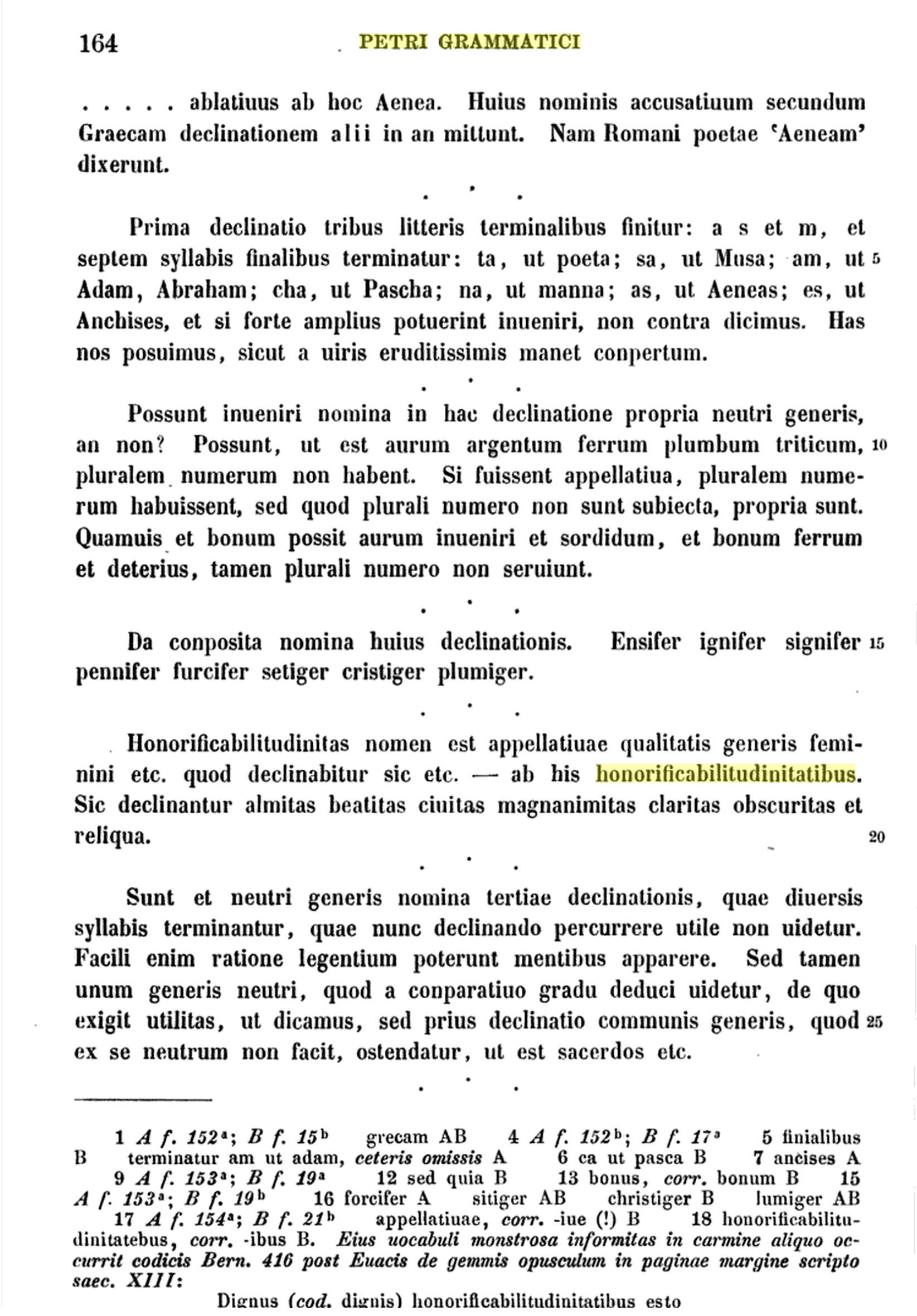 For what it's worth, the three longest word forms in the Vulgate have 19 letters (http://www.intratext.com/IXT/LAT0001/_FLJ.HTM):

Not the answer you're looking for? Browse other questions tagged text-corpus or ask your own question.

5
More on the 'honorificabilitudinitatibus' citation

7
How are P.Oxy. numbers chosen?
4
On what basis does Campbell put P.Oxy. 1231 fr. 12 together with fr. 15? And why does Edmonds not? And why does C read more than Grenfell and Hunt do?
10
How to search Corpus Inscriptionum Latinarum for words?
9
Is there a Latin POS-tagged corpus?
3
Tracing mysterious line ends in a combination of Sappho fragments found in an Italian anthology
2
Two Sappho-related reference requests
6
What is the proper way to cite the Packhum corpus?