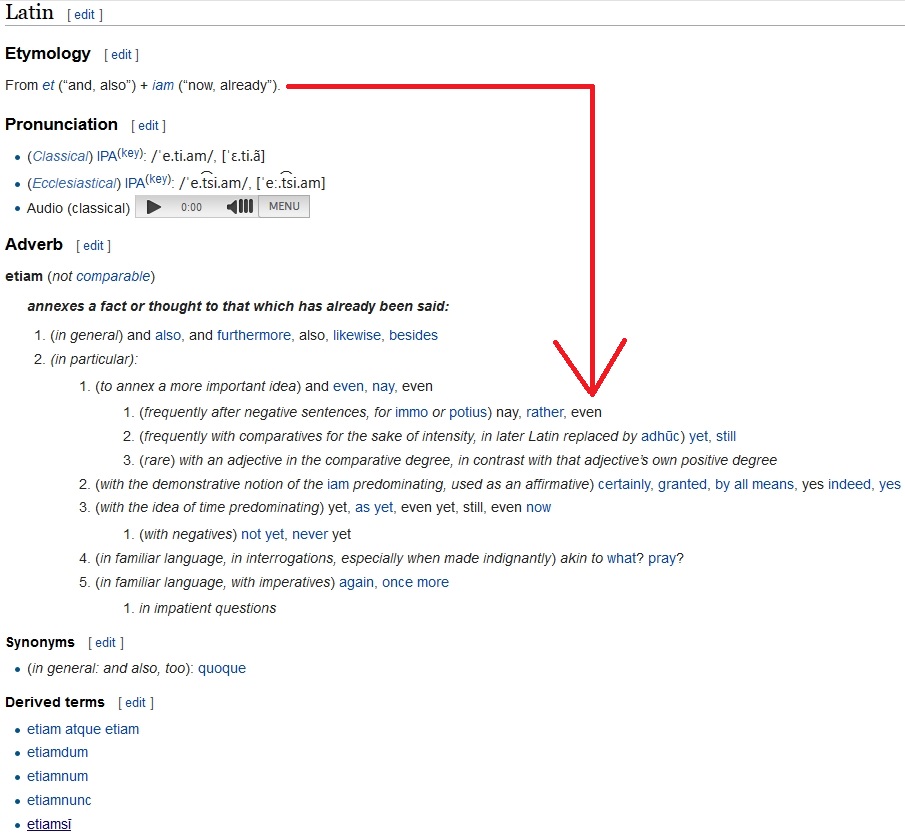 Etiam gets much of its meaning from et (i.e, as a conjunction and in other respects), but it also gets its emphatic (as well as temporal) meaning from iam. This is consistent with the Cambridge Dictionary definition of even which asserts that it is "used to emphasize a comparison".

Etiam is similar to et in its use as a conjunction as well as in having a somewhat overlapping meaning. Note that Lewis' An Elementary Latin Dictionary includes the meaning even in its definition for et:

In some cases, et has even been used by some authors in ways that could be interchangeable with etiam, as Gildersleeve notes:

Instead of etiam, et is occasional in PLAUTUS, in a change of person. CICERO uses it also after an adversative conjunction, as vērum et; also after nam and simul; more often when a pronoun follows, as et ille, et ipse. CAESAR never uses it so, SALLUST rarely, but it becomes common from Livy on. (Gildersleeve's Latin grammar, p. 302)

Although etiam is sometimes used in a temporal sense (when it means still, even now, etc.), its significance seems to also take on new meaning in its composition as et + iam more as a matter of emphasis rather than one of time. That is, it adds something new and at the same time emphasizes it, as if to say, "Now take note of this," or schematically, "A, B and now even C..."

The emphatic force of etiam has been noted by a number of grammarians. For example, Lewis and Short:

To annex a more important idea, and even, nay, even...

Etiam (et iam; also, even) is stronger than quoque (also) and usually precedes the emphatic word, while quoque follows it.

Etiam, even (now), yet, still, exaggerates (heightens), and generally precedes the word to which it belongs. (Gildersleeve's Latin grammar, p. 301)

A Grammar of the Latin Language (where, besides speaking of the emphatic role of etiam, it is also compared to et):

Etiam and quoque are in so far different in their meaning, that etiam, in the first place, has a wider extent than quoque, for it contains also the idea of our "even;" and, secondly, etiam adds a new circumstance, whereas quoque denotes the addition of a thing of a similar kind. Hence etiam is properly used to connect propositions. This difference seems to be correctly expressed in stating that etiam is "and farther," and quoque "and so, also." As in this manner quoque refers to a single word, It always follows that word; etiam, in similar cases, is usually placed before it, but when it connects propositions its place is arbitrary. Et, too, is sometimes used in the sense of "also," in classical prose; e.g., Curt., iii., 31, non errasti, mater, nam et hic Alexander est; Cic., de Legg., ii., 16, quod et nunc multis in fanis fit, for nunc quoque; in Verr., iv., 61, simul et verebar; and v., l, simul et de illo vulnere — multa dixit; and often non modo — sed et; e.g., Cic., in Verr., i., 1, non modo Romae, sed et apud exteras nationes; Nepos, Thrasyb., 1, non solum princeps, sed et solus bellum indixit. (See Bremi's remark on this passage, who states that sed et is not merely "but also," but always "but even." ) But passages of this kind are not very numerous, and not always certain, for the MSS. usually have etiam, so that this use of et in prose (for poets cannot be taken into account) must at least be very much limited, and it should not be used to that extent in which modern Latinists apply it. (Zumpt, et al, A Grammar of the Latin Language, pg. 253)

The foregoing is also interesting in that, when the author speaks of the meaning of etiam as "and farther", he seems to be trying to associate the idea of still with that of even. It's as if to say that the conjunction etiam takes us still farther to the point of emphasis.

2
What underlying semantic notions explain the etymology of 'fustis'?
1
What semantic notions underlie the Latin 'quartus' & the French « écarter »?
3
How did 'in-' + 'putare' compound to mean 'to attribute, credit to, impute'?
7
How did "status quo" get its meaning?
2
How did '-met' + 'ipse' + '-issimus' compound to mean <the same> (in *metipsimus)?
4
How did 'ex-' + 'serere' compound to signify 'thrust out, put forth'?
1
How does the notion of 'limpidity' explain the etymology of 'liquidated' in 'liquidated damages'?
2
Did 'liquidus' or 'liquo' mean 'abolish' and 'destroy, kill'?
2
How did 'licentiare' semantically shift to mean employment dismissal?
10
How did PIE *h₂énti-h₃kʷós get lengthened to Proto-Italic *antīkʷos?