How did 'interesse' shift from meaning 'to be between' to "to concern, make a difference, be of importance"?

What semantics notions underlie the original meaning as stated by Etymonline 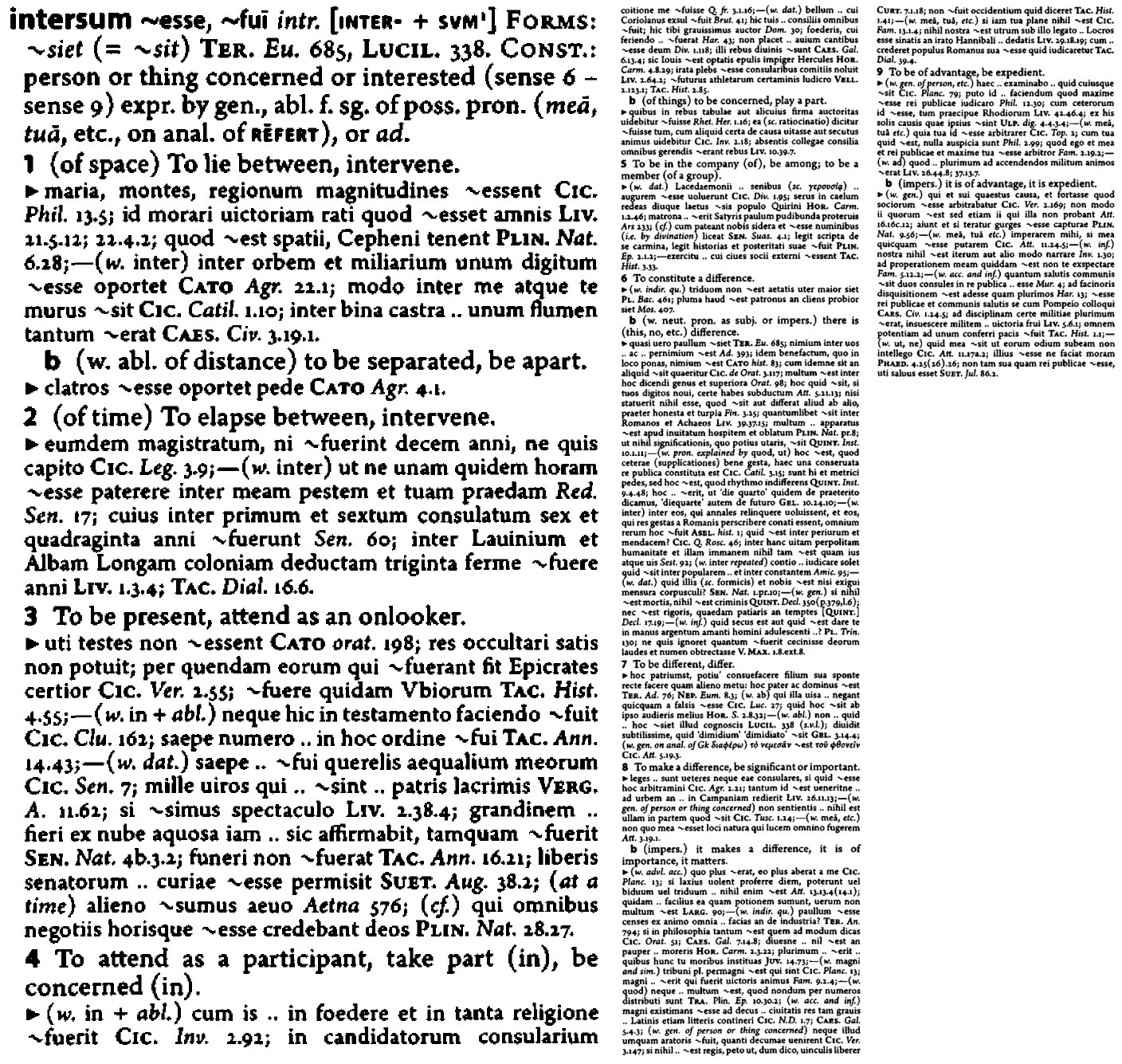 The apparent impersonal use of the third person (interest, interfuit etc.) is a contraction of inter rem est, for something like 'it's within the affair [of]' : the contracted form is thus misleadingly seen to be a part of interesse.

Although other constructions are used, [interest] is primarily followed by a genitive referring to the actual res when necessary, e.g. interest verborum for 'the phrase is interesting'.

[Later expansion] The derivation from inter rem est is given in Dr. Smith's Latin-English Dictionary, at article IV under the heading 'Intersum'. It is not always given in other reference works, but it seems (to me) to be implicit in them as they very often follow Smith quite closely.This is especially so in the following (although it actually preceded Smith).

The oldest article I can find on the usages of impersonal [interest] is in the'Copious and critical Latin-English Lexicon' of J.E.Riddle (1841). It also is, I think, the best: it certainly seems that his article on intersum, with its analysis and examples, has formed the basis for everything subsequent that I have looked at, including Smith's (which, like Riddle's, is is based on Freund's earlier work and several others), 'Lewis & Short' and the familiar primers and instructional books (Bradley's Arnold, Hardie, Kennedy, North & Hillard etc.). It does not actually explain the formation (as does Smith — see above) as a contraction from inter rem est, but appears to assume that it is correct.

Under the heading INTER-SUM, Riddle considers in art. IV the impersonal use of interest in a lengthy article with four sub-headings, distinguishing and explaining various uses, with examples from the classical authors, extracted below.

(A) With genit. of the person to whom any thing is of importance; but if that person be represented by a pers. pron., the abl. fem. mea, tua, nostra, vestra is sometimes used, or cuja (for cujus) — quoting Cic. Q. Fr. 2, 4, followed by a series of illustrations. [followed by] Instead of a person to whom the thing itself is of importance to any one may be added by the preposition ad : interest ad laudem civitatis, Cic. N. D. 1, 4 —ad properationem meam quiddam interest non te exspectare.

(B) The degree how much any thing is of importance is also expressed by neuter adjectives : multum interest, te venire, Cic. Fam. 12, 9; . . . . —ad disciplinam militiae plurimum intererat, militem insuescere, Liv. :—quid illius interest, ubi sis? What does it matter to him? — or by an adv., as, maxime, quantopere : quantopere intersit, opprimi Dolabellam. — By a genitive of value : illud magna mei interest, ut te videam, it is of importance or consequence to me, Cic. Att. 11, 22 [. . . . further examples].

(C) The matter which is of importance may be expressed by an inf. or acc. and inf., or by a final or interrogative clause, introduced by ut or ne, or by an interrogative particle [followed by examples including:] quantum salutis communis intersit, duos consules esse, Cic. Mur. 2 — vestra interest, ne imperatorem pessimi faciant, Tac. —Seldom by a subst. : in Epirum statui me conferre, non quo mea interesset loci natura, Cic. Att. 3, 19, 1. — more frequently by the neuter pronoun :vestra hoc maxime interest, it concerns you most, itis your affair more than any one's else, Cic. Sull. 28.

This should at least satisfy the concerns expressed in comments made before this addition was in place.

As for the reason involved in this meaning shift, I'm not sure if you're looking for an intuitive one or for a conceptually deeper one. As for the former, I'm just happy with the one given, for example, by Woodcock (1959: 171) in his "A New Latin Syntax" (Methuen, London):

"Interest, to begin with, meant 'there is between', i.e., 'there is a difference between (e.g., whether you do this or that)'. So interest came to mean 'it makes a difference', 'it is important', and thus becoming synonymous with refert, it borrowed mea, tua, etc., from the latter (...)". (bold type is mine: Mitomino)

As for the curious/idiomatic/... syntax of interest, see also a recent question & answer on crazy interest.

As for the semantic/conceptual reason involved in the meaning shift you're interested in, what I can tell you is that these polysemous shifts typically involve one from a physical domain to an abstract domain (and not the other way around!). CONCEPTUAL METAPHOR is a "tool" that is often appealed to by many (cognitive) linguists to account for these polysemous shifts. Simplifying a bit, conceptual metaphor typically refers to the understanding of a physical idea in terms of a more abstract one. So conceptual metaphors involve two different cognitive domains: SOURCE domain and TARGET domain. Conceptual metaphors are usually expressed this way: A (target domain) is B (source domain). The idea is that in our conceptual reasonings we go from the source domain to the target domain. For instance, a typical example of conceptual metaphor is LOVE IS A JOURNEY, whereby the abstract concept of love (target domain) is conceptually understood in terms of the physical concept of a journey/path (source domain). Typically, the concept of the target domain receives its basic structure (i.e., the so-called "image-schema") from the concept of a source domain: the former is more abstract and more amorphous than the latter, whose perceptual structure is clearer.

So, assuming the theory of conceptual metaphors put foward by Lakoff & Johnson (see the references in the link above, especially their famous foundational work "Metaphors we live by"), the conceptual metaphor involved in your meaning shift should relate the source domain of "being between" with a target domain of "being important". As a preliminary try (it's just a suggestion), I recommend you to take a look at how Lakoff (1987) (see the reference in the link above) develops the following conceptual metaphor, which I think can be involved in the polysemous shift you're interested in:

According to Lakoff, being in a central position allows maximum access to, control over, causal effect on surrounding objects. As for the "center-periphery" image-schema, something in the center is more important than something in the periphery. And so forth. Please see Lakoff (1987) for a more detailed discussion of this conceptual metaphor and related ones associated to the target concept of IMPORTANCE.

After this, take also a look at this recent work on Embodiment in Latin Semantics. So good luck with your "journey" into Latin conceptual metaphors!