The tradition for Sappho Lobel-Page 144

Here is the fragment as it appears in Voigt's edition: 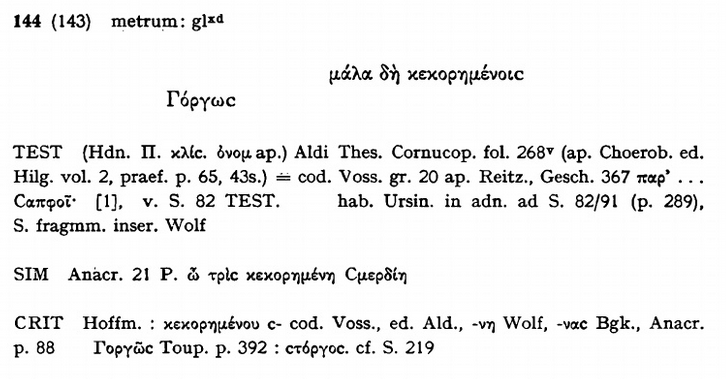 and the critical note:

So Voigt seems to say the one codex for this, which is curated (?) by Vossius, read μάλα δὴ κεκορημένου στόργος, and that Hoffmann proposed her version, while Wolf had κεκορημένη and Bergk had the above text, with Toup having recognized the name Gorgo in this quootation.

However, Bergk says the tradition had στοργᾶς, Ursinus had κεκορημένος στόργος, and he "emendavi haec" to the form he gave.

This begs the question:

What did the tradition actually read, στόργος or στοργᾶς? I mean, it couldn't be both… or was there a margin note, perhaps by Vossius himself (as happened with the Hesychius gloss to ὠράνα, where he is responsible (AFAICT) for reading that as ὦ (specifically Ἐραννὰ, while others later read Εἴρανα or some contraction by comparison with LP 91) instead of ὤραννα=οὐράνια)?

Bonus question 4 was answered by @AlexB's comment: it's called synaphia, as I luckily guessed correctly :).

also cf. West 1973, 'If the editor wants to emphasize his confidence in a conjecture which he has adopted, he can transpose "uinxerunt Heinsius (or scripsi) : iunxerunt codd." into "iunxerunt codd.: corr. Heinsius (or correxi, or emendavi)"' (pp. 90-91).

It seems you've been using a very old, outdated edition Bergk 1843. I have checked two later editions de visu, Bergk 1867 and Bergk 1882 and in both editions the only form mentioned is στόργος:

Bergk 1882 (I'm unaware of any other later editions, and this is the edition of Bergk you should use, that is, if you feel necessary to refer to Bergk at all): 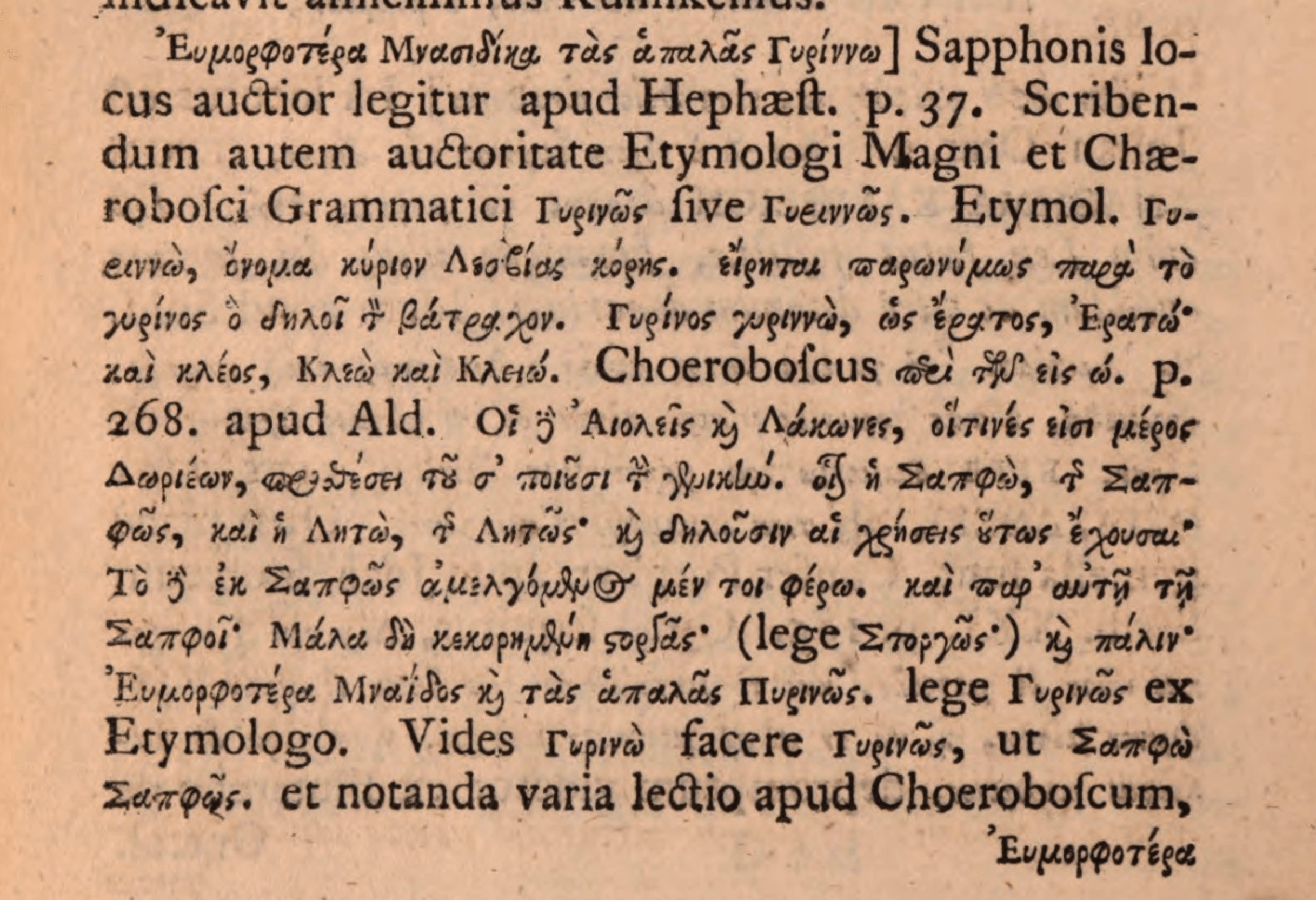 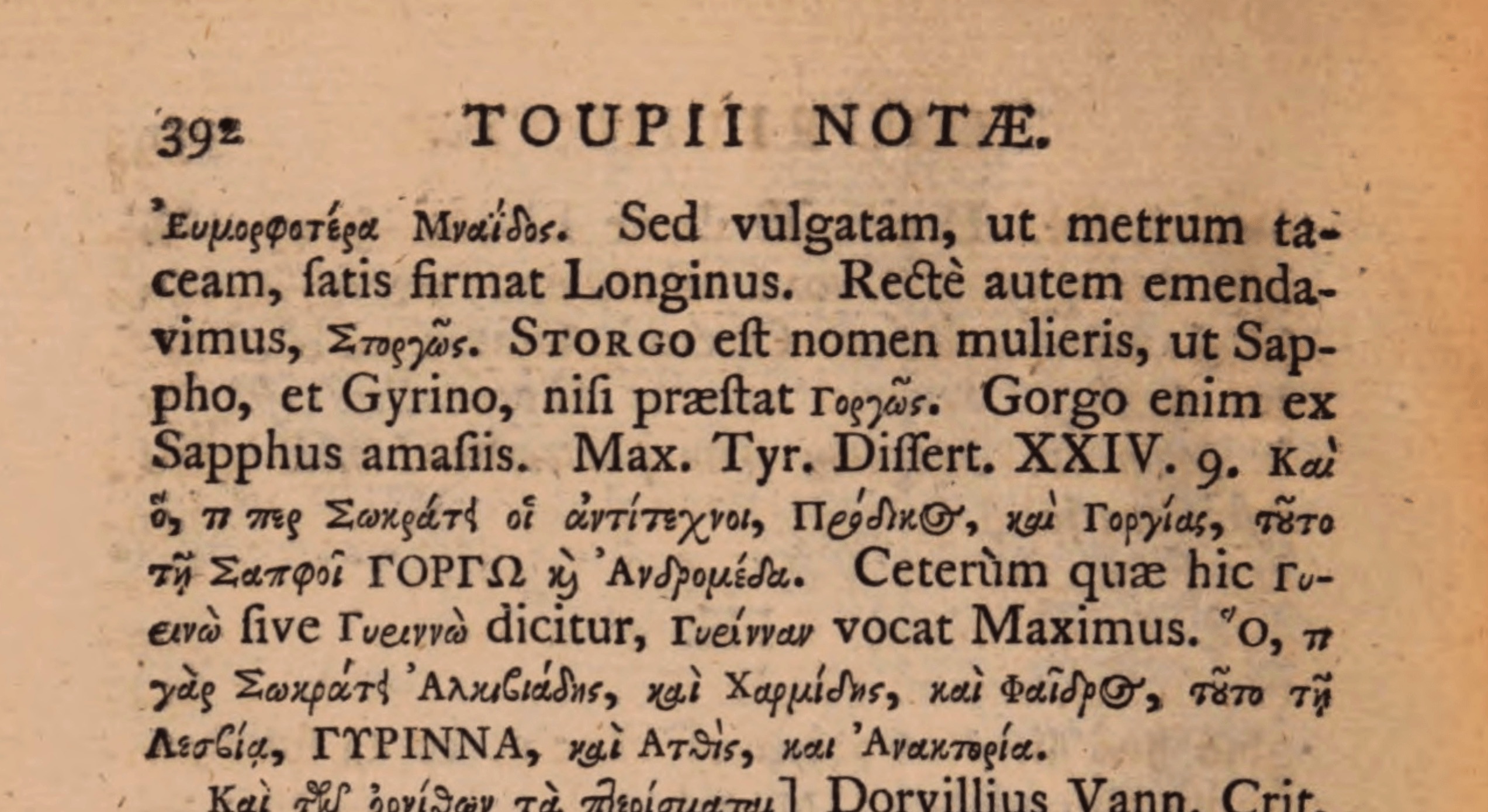 A: Because not much of what Herodian wrote (in the second century) survived. His treatise Περὶ κλίσεως ὀνομάτων is preserved "primarily in fragments found in Choeroboscus' commentary on Theodosius" (Dickey 2007: 76), which Poliziano, Varinus (Guarino) Favorinus and Carolus Antenoreus decided to put together with other Greek texts on noun declension and accentuation, which in its turn was published by Aldo Manuzio and Urbano Valeriani (van Gulik, English transl. 2018).

3
Sappho 94: the Spaniards' completion
3
About the Alexandrian edition of Sappho: how were the poems assigned to the books?
2
Why does Athenaeus say this is not Sappho?
8
About Sappho Edmonds 89 Campbell 48
2
Figuring out the grammar of Edmonds 57 (Edmonds' version of the part in cruces of Lobel-Page 46)
1
About Sappho Lobel-Page 152
3
Sappho Lobel-Page 39: μάσλης vs. μάσθλης