Do non-Attic-Ionic dialects distinguish the accusatives of the ἀσπίς and χάρις types?

In Attic-Ionic Greek, nouns with dental stems show two types of accusative singular endings, depending on the position of the accent:

Does this distinction appear in other dialects too?

I'm mostly wondering about Aeolic, which has general recessive accentuation, so there's no possible accent distinction. How does Aeolic form the accusative singular of dental stems?

But I'd also like to know how this shows up in other dialects (West Greek, Arcado-Cypriot). Is it an Attic-Ionic innovation, or is it Proto-Greek, or something in between?

Buck and Smyth seem to say nothing on this question, which on the face of it may mean that other dialects behave like Attic-Ionic and/or that we have no evidence, but I haven't checked any of the specific dialect handbooks.

ETA: some more info from Chantraine (Morphologie historique 66-7): it seems there are some attested forms in -α from recessive-accent nouns; he lists ἔριδα, ὄρνιθα/ὄρνιχα (the latter from Pindar), χάριτα, ὄπιδα. He then adds "en revanche, l'on ne trouve jamais que πατρίδα", but I don't know if he's talking about that specific noun or the final-accent class as a whole (which seems more likely). This is interesting, but still doesn't give a clear picture of the dialectology and history of these forms (nor does it answer the Aeolic question).

(answer in progress - notes so far) 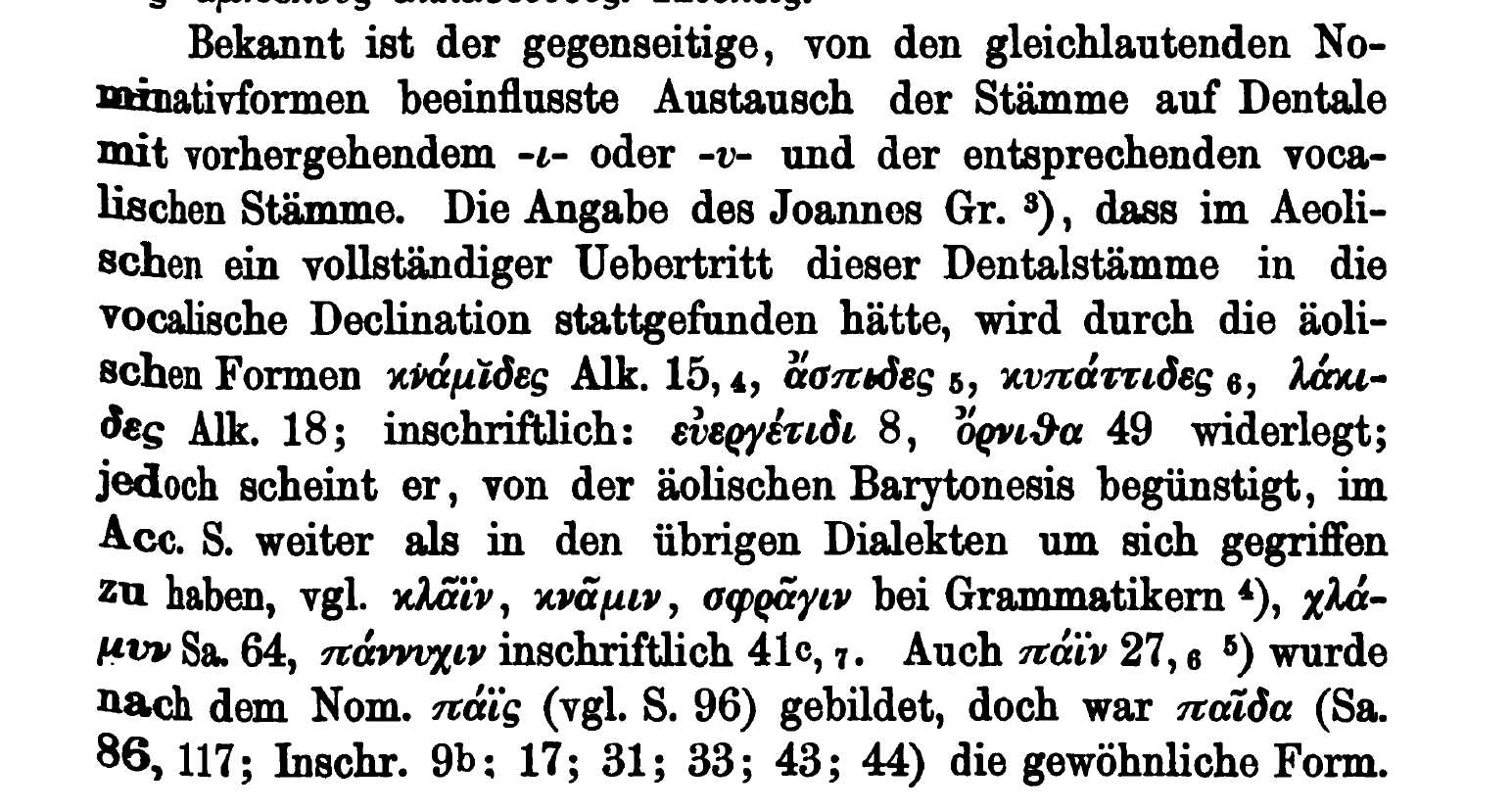 1
About an Athenaeus quote marginally related to Sappho

20
Did the Romans ever combine Greek and Latin morphemes?
8
When was the dual number used in Attic Greek?
6
In ancient Attic Greek, how (un)stable were "ΝΣ"/"ΝΖ" and preceding vowels?
7
Dies and the fifth declension
2
On the etymology of Greek ἄελλα, and the mysterious Hesychius gloss for αυεουλλαι
5
What are the θη-future and θη-aorist?
1
Do any Greek words have stems ending in labiovelars?
8
Aeolic and Ionic personal pronouns: paradigms for recitation?