What does “ob” mean in a money context?

"Ob" appears as a sum of money in a property list of 1598, written in Latin with lots of abbreviations. What does it mean in this context?

The monetary system of an important part of medieval Europe was based on the non-decimal librae, solidi, and denarii system, (the UK only abandoned such system in 1971). A smaller subdivision of the denarius was the obolus, equivalent to half a denarius (or a halfpenny). This was abbreviated as ob. It can be found in tons of medieval documents. Meanwhile, q corresponds to a quadrans, one quarter of a denarius.

For example, in the Valor Ecclesiasticus, the famous survey of the finances of the Church conducted by Henry VIII, we find this monetary system: 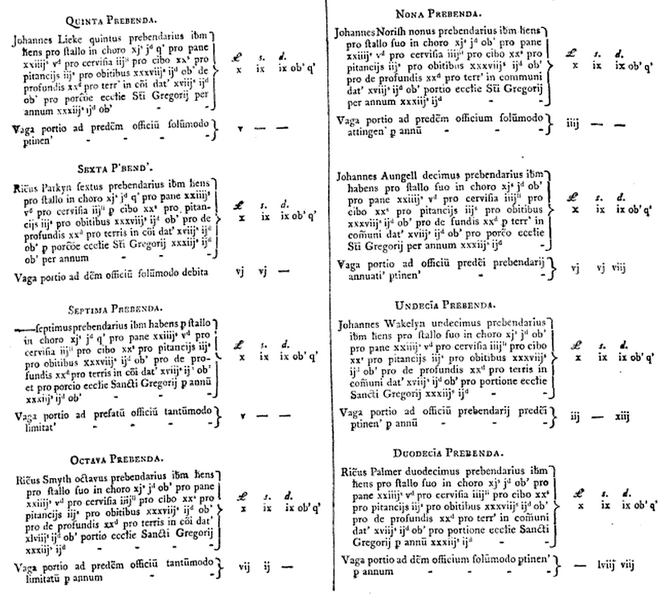 Notice how £, s. and d. are written at the top of the line, with the quantity at the bottom, whereas ob and q are written directly as quantities. This is because the subdivisions within the denarius only need to write these symbols once. For instance, 1/4 is just q, 2/4 is ob, and 3/4 is ob q. In other pages you can see sometimes ob and q alone.

Other examples are here and here. The latter, in page 149, lists some word translations and abbreviations:

The general meaning of ob is "because of" or "for". In a monetary context, I would usually take it as indicating what the money was given or received for. For instance, L&S give the example pretium ob stultitiam, "the price paid for stupidity".

Possibly an obol, which came to be whatever was the smallest coin in circulation, though originally a Greek copper coin, the sixth part of a drachm, notable as the coin which accompanied the dead to pay Charon the ferryman. In my Latin dictionary as obolus.

Ainsworth has a section on abbreviations.

I'm guessing you knew that and discounted it. But the second meaning is more interesting, and only context can show if it is appropriate:

Not the answer you're looking for? Browse other questions tagged money or ask your own question.

5
A word for income tax
4
What are the Latin forms behind credit and debit?