A bit of background on the fragment. This is a quotation by Herodian. The manuscripts, according to Bergk (frr. 56 & 82), give it as:

which is by Herodianus. Bergk comments:

Apparet haec postrema ex alio quo fragmento petita esse. | It seems that these last words were taken from some other fragment.

No explanation is given to this. The only thing I can vaguely see is a metrical argument, where the first part, up to σπολέω μέλεα, seems to be x–uu–ux, two lines of that meter, broken as:

and the second part is apparently ––uu–?–uuu, whatever meter you want to see there. In effect Bergk amends that part to:

In the first fragment, it is IMO unclear whether μολθάκαν τύλαν is accusative singular or genitive plural, with this being Aeolic and the two forms being identical in Aeolic. In any case, the grammar is clear, and so is it for the second fragment, where τε (amended to τὲ) is the κατὰ ἀπόλυσιν (as Apollonius Dyscolus would put it) of the pronoun σὲ, and καμ ... τύλαν is either κατὰ ... τυλῶν or κατὰ ... τύλην, down on cushion(s).

Lobel-Page, Voigt, and Campbell keep these two together, sticking to the tradition and putting part two in cruces, since it is, AFAICT, unintelligible as is. They do, however, add the κα- to the σπολέω in part 1, ut glyconii evadeant, I suppose.

Edmonds splits these, adds ὀ- instead of κα- in part 1 for the same metrical reason, with it being a pre-consonant-cluster form of ὄν=ἀνά, but then has the following for part 2:

with a synaeresis for the last two vowels. This entails a pretty strong corruption of καίναν which lost three letters to being copied over and over, τύλαγκας featuring a respelling because "Hey, the n-sound before kappa is spelt gamma, so there's a spello here!", two letters being lost in the middle, the final -ς going with the initial of ἀσπόλεα to form σὰ, and finally σπόλεα being a fusion of σπολέω + μέλεα. The problem is: how does the grammar work in this sentence? It would seem that he is ignoring Herodian's warning and reading τε as an and that is lost in the translation. However, there is a you in the translation:

You shall lie on new cushions.

Now, new cushions is καίναν τύλαν. Where are the σὰ μέλεα? Are the cushions really genitive plural? The only explanation I could find to that is that κατὰ is read as a postposition here, going with the cushions, and then I would read σὰ μέλεα as the object, and then we have two objects! Or is this a Greek-style accusative (accusativo alla greca, if you know Italian), meaning this literally reads as follows?

And then why the incredibly non-literal translation? Or else I could read the cushions as accusative, and that would force me to read τε as a conjunction, ending up with:

And I will put new cushions down on your limbs.

which is even farther from Edmonds' translation! So what do you think? 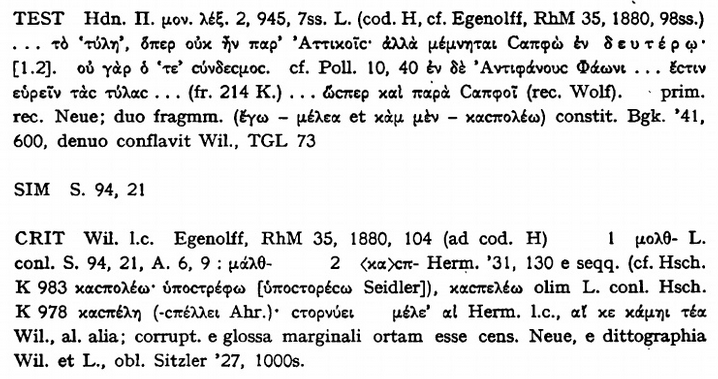 Cool facts which I'm grateful to have learned, but the actual question boils down to

The answer is simple, and you don't need to reference idiosyncractic Greek constructions to see what's happened here. The literal Greek is not idiomatic English, and Edmonds has smoothed the English, grammatically, by replacing "your limbs" with "you", and smoothed (likely morally) "I'll lay you down on cushions" (which implies depriving the mate of agency) into "You will lie down on cushions". (The shall still hints who the actual agent is in the sentence.)

(Early 20th century morality: it's quaint, and it interferes with translation. Arguably the early 21st century has rediscovered that failing.)

2
About the part in cruces of Sappho Lobel-Page 46