Ah, here we are again. The Spanish edition I mentioned in a recent question has produced another piece of trivia. Here is the offending fragment, numbered 89:

Apart from the usual garbling of the text, this seems to be a colophon of a papyrus that, if the completion is read right, should give fragments from book IV. Looking at the translation:

would seem to suggest that the original line breaking was: 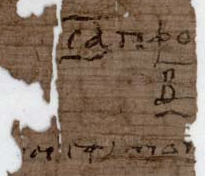 Very clearly, neither matches the assumed line breaking, or the bracketing for that matter.

Moreover, the Spanish edition says it uses the text of Reinach's edition, which I recently reconstructed to have been published in 1937 and reprinted in 1966. I assume they would follow Reinach's order of the fragments, besides the text, given that at the end there is a section called "Fragmentos no recopilados en la edición de T. Reinach" (framgents not compiled in the edition of T. Reinach). The fact of the matter is, this is placed at the very end of book IV, with the fragments right before it being all universally book IV (in fact, fr. 88 is a safopoemas-style smashing of P.Oxy. 1787 fragments, the other such smashing being fr. 40 from P.Oxy. 1231 fragments), and what starts afterwards being precisely the book V part of Lobel-Page, minus some fragments published later than Reinach. So this would lead me to assume Reinach actually had this as a book IV colophon, or a supposed such thing.

The problem with this is that, if such a colophon existed, I would assume Voigt's monumental edition would record it together with the two above, in the section ad editiones antiquorum pertinentia of the Testimonia. But that is not the case. In fact, the two colophons above are the only ones in that section. Which would lead me to assume no book IV colophon for Sappho was ever found.

So what do I make of this? Is there such a colophon which Voigt somehow missed or recorded elsewhere? Should that colophon be taken as one of the two above with a spectacular corruption? What did Reinach have that matches this? Can we answer any of these questions?

Here is the paragraph where the edition states they follow Reinach's text:

The Greek text we have used was that which Théodore Reinach prepared, as a courtesy to his magnificent critical apparatus and as a minimal tribute to his strict and conservative work, who prefers, without audacity, to read as little as possible, with the certainty that those few words were by Sappho, in place of the wide, interesting and risky reconstructions of other authors. Since the edition of Reinach, finally revised by Aimé Puech, predated the publication of various important papyri and of other very useful editions, we have permanently consulted those of Edmonds, Diehl, and Page, and in various occasions we have followed them.

(So that is where all those daring reconstructions I saw in safopoemas come from! They should still be in variantes though, IMHO…)

And here is the papyrus:

So there you have it guys. Case closed.

Why Voigt seems to not have this, is another case and is still open.

Actually, zooming in like crazy, you can see a very clear flipped 3 (ε). This definitely looks like an epsilon, though I would expect a lunate ϵ rather than a flipped three. Also, there seems to be a circumflex on the mu. So I revise my transcription:

I have zoomed in too. There is definitely the top of some letter after the "m", but I cannot see that it is "e". But what else could it be? (a comment to this answer)
@fdb What I see is a faint /-shaped stroke (which could be dismissed as a quirk in the papyrus, e.g. a fold, due to the ink's faintness), a short -shaped one, and a short /-shaped one, which could add up to either a reversed three woth the curves turned to angles, pr a capital sigma. The positioning of said letter is pretty weird, almost as if it were a superscript, which is why I rendered it as such in the revised transcription. I'll add a zoom with retracing and the possible completions to be clearer. If we want to exclude a superscript, then Idk what that could be. If we accept it, it might be an editorial correction for a smaller letter below it, or a letter that was placed lower on the line. (my reply to said comment)

Let me add some pictures. First of all, a zoom: 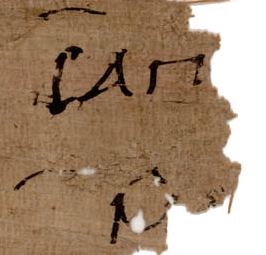 If we had any doubt on l. 1, they are certainly dispelled by the zoom. As for l. 2, the M̂, while missing the right vertical leg, is undoubted, and the circumflex is evident. Said circumflex is indeed rather weird, but the only explanation I can think of is that we're looking at an eta, except the then-supposed horizontal stroke clearly bends way too far upwards for this to be an eta IMHO. So that is an M̂. As for the other letter, I hereby deny the "the /-shaped stroke on top could be a papyrus quirk" part of my comment, because the ink is clearly on part of it. Possible retracings: 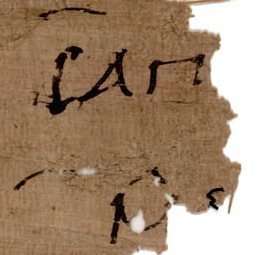 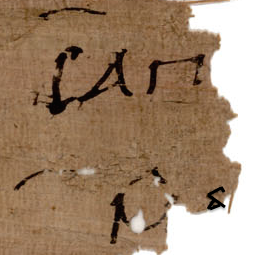 In the left version, the uncertain letter is either an epsilon or a sigma, but given the preceding mu, and given that this papyrus uses the lunate (C) shape for the sigma, it must be an epsilon. The problem is that there is ink that continues down-leftwards from the /-shaped stroke in the middle. On the right, the letter is an alpha with circumflex: Â. In both cases, the letter appears to be superscripted, as if an editorial correction of another, totally lost letter.

Here is another, more far-fetched option: 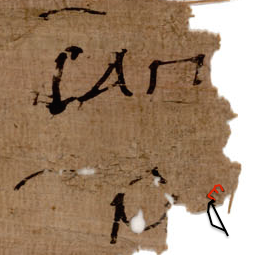 So that would be the weirdest alpha I've ever seen, corrected into an epsilon. I must admit that the stroke should be less vertical, that -shaped stroke in the alpha, making the alpha marginally less weird.

In conclusion, I'll have that as M̂ ..

3
Sappho 94: the Spaniards' completion
4
On what basis does Campbell put P.Oxy. 1231 fr. 12 together with fr. 15? And why does Edmonds not? And why does C read more than Grenfell and Hunt do?
3
About the Sappho fragment containing Doricha's name that was found first (Campbell 15, Edmonds 37)
2
Why does Athenaeus say this is not Sappho?
3
About Sappho 16, ll. 6-9
4
About the "Gongyla poem": who proposed the perfect imperative?
4
About P.Oxy. 1787 fr. 9
6
Identifying corrupted Sappho fragment or mention of Sappho found in just-newly-found-online Spanish edition of Sappho
3
Identifying alleged Sappho fragment from mishmash on otherwise generally good online resource
3
Tracing mysterious line ends in a combination of Sappho fragments found in an Italian anthology