What I gather from Edmonds is that the fragment at hand is found in a letter written by Iulianus (Julian the Apostate?) to Iamblichus, and the "offending" part of the letter reads thus:

After the obvious emendation of μὰ ὤμαν -> μαόμαν, the above translates to:

You came, and you did: for you came, even not being here, in your writing; and I was longing for you; and you guarded my heart which burnt with desire […] and you yourself be very well, as the beautiful Sappho says, and not only for as long as we've been parted, but be well forever too.

For metrical reasons, and probably semantic reasons too, this verb is typically amended someway. Edmonds has ἔφλαξας=ἔφλεξας, "you burnt up", Campbell, Lobel-Page, Thomas, and The Complete Poems of Sappho have ἔψυξας, "you cooled down", and Greek Wikisource, Bibliotheca Augustana, and Wilamowits have ἔφλυξας.

What verb is that last form from, and what does it mean?

Now I'm used to Bergk missing a lot of fragments because they were on papyri unearthed only after his edition, but this is a quotation, so I'm surprised it's not there.

How come Bergk doesn't have this fragment?

Bonus: What are the bracketed numbers here referring to? Was there a prior Bergk edition with different fragment arrangement?

As far as I can tell, the first part isn't even attributed to Sappho (but maybe the […] had that attribution). The second part is explicitly καθάπερ ἡ καλὴ Σαπφώ φησιν though, so it's weird to see it missing from LP/C 48, and from The Complete Poems of Sappho. In fact, I flipped through all LP yesterday and I just couldn't find it.

How come that second part seems to be completely missing from Lobel-Page? Where is it in Campbell? And in Voigt too, though the TEST has that part of the quote:

From part 2, one would expect the poem being quoted to contain, maybe a few lines further down, something like:

So we have a hole, perhaps filled with σὺ κάλ' or similar, and we are left with:

Let's ignore for a moment that Aeolic would mandate ὄττῳ and bye meter, assume she used a poetic licence to make that tau single and not screw the meter :). How do we fix that verb? I thought of ἀπέλειμμεν, but that would probably be active, so perhaps ἀπελείμμεθα. Except that would be perfect, so we need reduplication: ἀπυλελείμμεθα would be perfect medio-passive indicative. That is one syllable too many.

Bonus: All Voigt has on this fragment 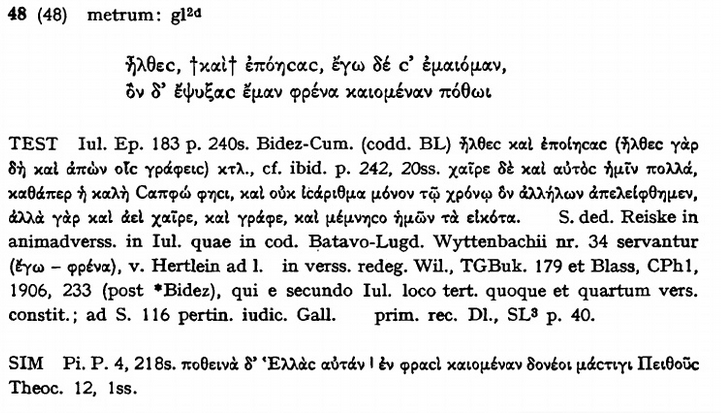 The only verb I can see in LSJ that it might conceivably relate to is φλύω ~ φλύζω "to bubble over, to burst out". LSJ reports the metaphorical usage "overflow with words, babble" in Aeschylus, and Nicander has the literal sense "to bubble over а thousand things with mania", μανίης ὔπο μυρία φλύζειν. The verb kind of makes sense in context: "you made my heart burst, which burnt with desire". Apollonius of Rhodes has ἐκφλύξαι γόον "to give vent to a groan", which suggests a palatal aorist for φλύζω. (That kind of thing happens routinely in Doric, but I don't think it does in Aeolic.)

I can't think of an Aeolic vowel change that would explain the upsilon with reference to a different verb, either.

but neither give results on Pereus Greek Word Study Tool

Having had access to the Perseus morphological analyser, and spent 13 years extending it for the TLG: I'm not surprised Perseus didn't have an account for it; it was quite underspecified for verbs, and incurious particularly about Aeolic and Late Greek. (The TLG version has had the opposite problem, of trying anything morphologically plausible, and that took a lot of work to bring under control.)

Has a perfect without reduplication ever been recorded in poetry, something like ἀπυλείμμεθα?