Researching an answer for this question, I found a book of regulations of the University of Oxford, dating from the early 19th century. The title is: 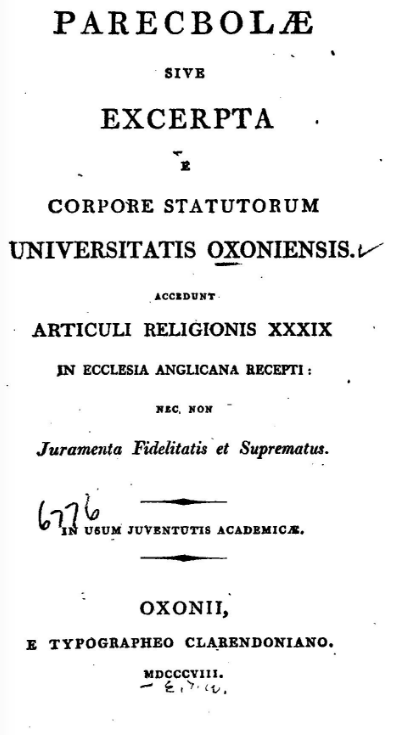 I cannot find the meaning of Parecbolae anywhere. L&S returns nothing. If you google that word, all you get are links to precisely that book! (which, being regulations of a university, was republished over many subsequent years).

I have no clue what it could mean, since clearly it's unrelated to parabola.

This is a word transliterated and adapted from Greek παρεκβολή (parekbolḗ), from πᾰρά (para-, "near", but here meaning "placed together") and ἐκβολή (ekbolḗ, "throwing out" but here meaning "something tossed off"), which together can be a "compilation of a set of critical remarks":

As the word sive ("or", "or also", "also called") indicates as well, the plural parecbolae is used here as a synonym of excerpta. The author names his work parecbolae, to which he adds excerpta as an explanation or translation for those who might not know the word parecbola.

It might be a fairly late adaptation, for I couldn't find any classical Latin sources. Parécbole is in a Portuguese dictionary: https://www.dicio.com.br/parecbole/ It's also used in a few other languages, amongst which English, but very rarely (Google search results). There is mention of a Parecbole by Eustathius of Thessalonica (a major Byzantine scholar), then the book from the question, and also a gloss describing the meaning of the word in general, through referring to the work by Eustathius. References to parecbolae on/from Aristotle by Theodorus Metochites (another major Byzantine scholar) can be found as well. Then there are a few more results (in addition, no doubt, to other uses of the word outside Google's limited reach).

I think there is a clue in the sive which separates the word from excerpta.

Sive was once customarily used to mean 'or' when giving an explanatory sub-title to a more obscure name. For example, the well-known Gradus, popular in various editions and more or less contemporary with your Oxford University example, had the full title Gradus ad Parnassum, sive synonymorum et epithetorum thesaurus.

I deduce that parecbolae is just another word for excerpta. It would not necessarily be classical.

[On a point of information, Fellows of OU had at that time to be in holy orders of the Church of England, and must therefore swear to adhere to the Thirty-Nine Articles of religion referred to.]

Not the answer you're looking for? Browse other questions tagged vocabulary greek new-latin synonyms or ask your own question.

4
What is an undergraduate student?

7
What is the difference between cēvēre and crīsāre?
8
What is the exact translation of 'solummodo'?
6
What is an academic fellow?
3
Identifying alleged Sappho fragment from mishmash on otherwise generally good online resource
2
What was the standard ancient term for a thermopolium?
6
Latinisation of a surname. Seeking advice from expert Latinists
3
Does anyone know what the New Latin adaption of iens (family to eo) was?
7
Did perveniō acquire a new meaning in Late Antiquity?