Trying to find Latin resource I used to have years ago

Once I found online an old (I believe 16th century, but not sure) list of simple sentences, Latin and their English translation side by side. I've tried with no avail to find them again through google, and I looked through my old Latin folders because I knew I had a few pages printed out at one point. But I guess threw them out. Any help with this is greatly appreciated.

Mathurin Cordier was a theologian and teacher of the 16th century, and his work, known as the Corderii Colloquiorum, sounds a lot like what you're describing. Here's a screenshot: 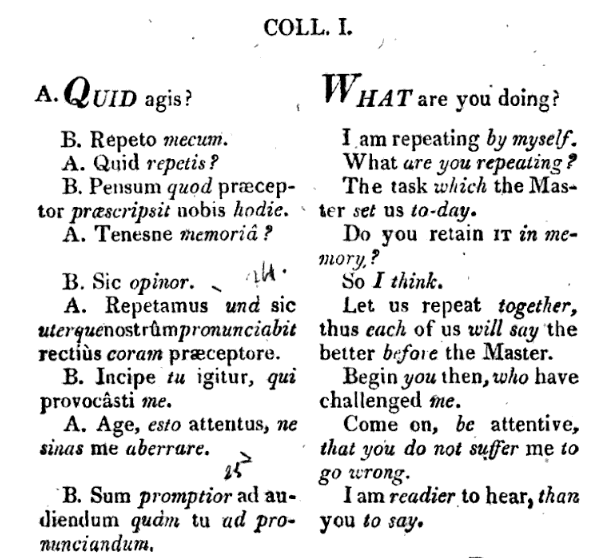 It's quite possible that you remember the Eton Latin Grammar of (Arthur?) Hay, in widespread use in English public schools a couple of hundred years ago. It was adapted from the sixteenth century Eton instruction manual, but was much revised over the years and published in two parts. I remember from years ago an edition published in the 1880s by John Murray (London), which was partly constructed in the way you describe. You could begin your search by looking at https://www.forgottenbooks.com/en/books/TheEtonLatinGrammar_10853396

[Added later] This is a sample from the source I suggested, returned to the two-column form used by Hay, as nearly as I can manage it:

(246) Qui signiﬁcans causam éxigit ut es stultus qui crédas huic (homini). // Who, signifying the cause, requires a subjunctivum (modum) subjunctive mood as, you are a fool who can beliéve, that is, for beliéving this fellow.

I hope that this is helpful to you.

Not the answer you're looking for? Browse other questions tagged resource-request or ask your own question.

8
Historical recordings of ex tempore contemporary Latin used in university lectures?
8
How to find scholarly articles related to Latin?
15
Where to find an online Latin text corpus and what can I do with it?
17
What have we learned about Latin in the last century?
81
What is Google Translate good for?
3
How do I find uses of a word in Ecclesiastical Latin?
6
Where can I find large public domain texts in latin?