There are different theories on the etymology of Asclepius, all of which I want to understand.

The etymology of the name is unknown. In his revised version of Frisk's Griechisches etymologisches Wörterbuch (Greek Etymological Dictionary), R. S. P. Beekes gives this summary of the different attempts:

"H. Grégoire (with R. Goossens and M. Mathieu) in Asklépios, Apollon Smintheus et Rudra 1949 (Mém. Acad. Roy. de Belgique. Cl. d. lettres. 2. sér. 45), explains the name as 'the mole-hero', connecting σκάλοψ, ἀσπάλαξ 'mole' and refers to the resemblance of the Tholos in Epidauros and the building of a mole. (Thus Puhvel, Comp. Mythol. 1987, 135.) But the variants of Asklepios and those of the word for 'mole' do not agree.The name is typical for Pre-Greek words; apart from minor variations (β for π, αλ(α)for λα) we find α/αι (a well known variation; Fur. 335–339) followed by -γλαπ- or -σκλαπ-/-σχλαπ/β-, i.e. a voiced velar(without -σ-) or a voiceless velar (or an aspirated one: we know that there was no distinction between the three in the substr. language) with a -σ-. I think that the -σ-renders an original affricate, which (prob. as δ) was lost before the -γ- (in Greek the group -σγ- is rare, and certainly before another consonant). Szemerényi's etymology (JHS 94, 1974, 155) from Hitt. assula(a)- 'well-being' and piya- 'give' cannot be correct, as it does not explain the velar."

The Cult of Asclepius was already popular by the 5th Century BC so why would the god derive his name from a Tholoi built in 360 BC? Does that theory sound plausible or far-fetched?

Does that seem reasonable to anybody? And I'm not sure what exactly it means, and how on earth that would relate to the god Asclepius, or how his name could derive from that?

2.of sentiments, ἤπια εἰδέναι to have kindly feelings, Hom.; πρὸςτὸ ἠπιώτερον καταστῆσαί τινα to bring him to a milder mood, Thuc.

This last theory, of HGL,RS, seems the most plausible to me, but leaves me wondering what they think the beginning Ἀσκλ- derives from?

I'm abusing the answer space since there is no option in comments for this. The full, finessed, Beekes 2010 dictionary (vI) has 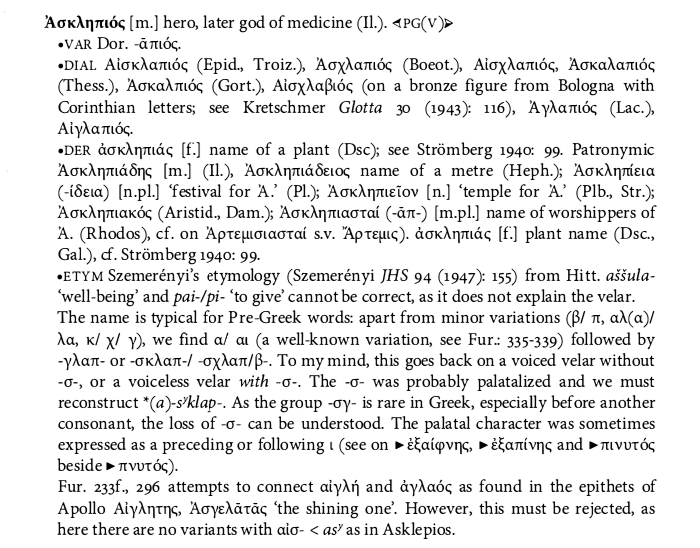 I am only including it to display the variants in dialects, which Beekes uses to deadly effect, when it comes to Pre-Greek, his forte. A healing deity is not unexpected to have been inherited from the sophisticated earlier inhabitants of the land.

He is compelled to reconstruct *(a)-s𝑦klap-.

Not the answer you're looking for? Browse other questions tagged etymology greek or ask your own question.

3
How do you pronounce "Aeclepiadae"?