When did 'ph' start to be pronounced like 'f'?

I learned from Nathaniel's answer to my previous question that 'ch', 'th' and 'ph' were aspirated voiceless stops in classical Latin. In my experience many contemporary speakers of Latin pronounce 'ph' as /f/.

When did 'ph' turn into a fricative? How do we know when this happened? Was this change a regional thing or did it occur simultaneously in different places?

I have been told that a similar development happened to the Greek φ. Were these changes in Greek and Latin connected?

It's impossible to pinpoint an exact date, but there is evidence. As usualy, Vox Graeca or Sihler's New Comparative Grammar is where to look.

The earliest inscription we have of a Greek phi transliterated as a Latin 'F' comes from Pompeii in the first century CE, where the name Daphne was inscribed on a wall as Dafne.

This might not have been monolithic, but Jewish catacombs in the first-third centuries CE transliterate PH as F and second century grammarians have rules on when to transliterate phi as F and when as PH. This latter tidbit is evidence that the Latin followed Greek speakers in making PH a fricative, as Clackson and Horrocks (2007: p. 275) note:

Where there was still contact with Greek speakers, the spoken language adopted the change of ph, etc. to fricatives, which had taken place in spoken Greek at the beginning of the Christian era.

PH as a fricative in Latin appears to be fairly uniform as early as the second century. J. N. Adams notes this receipt from Egypt dated to c. 150 CE:

Note the spelling of filium as philium. This would indicate that here in Egypt in the middle of the second century there is no difference in Latin in the pronunciation of PH and F. Interestingly about Egypt, though, is that apparently the shift never fully happened there. Coptic retained the aspirated plosives. Gignac (A Grammar of the Greek Papyri of the Roman and Byzantine Periods, Vol. I: Phonology, 1976) argues that in Egypt phi and chi remained as they were pronounced in Classical Greek. Horrocks (Greek, 2009) doubts this was ever universal, though it was widespread by the fourth century.

As you can see from the title, Gérald Purnelle studied how Greek proper nouns were transliterated in Roman inscriptions. I made a diagram to better present his findings. 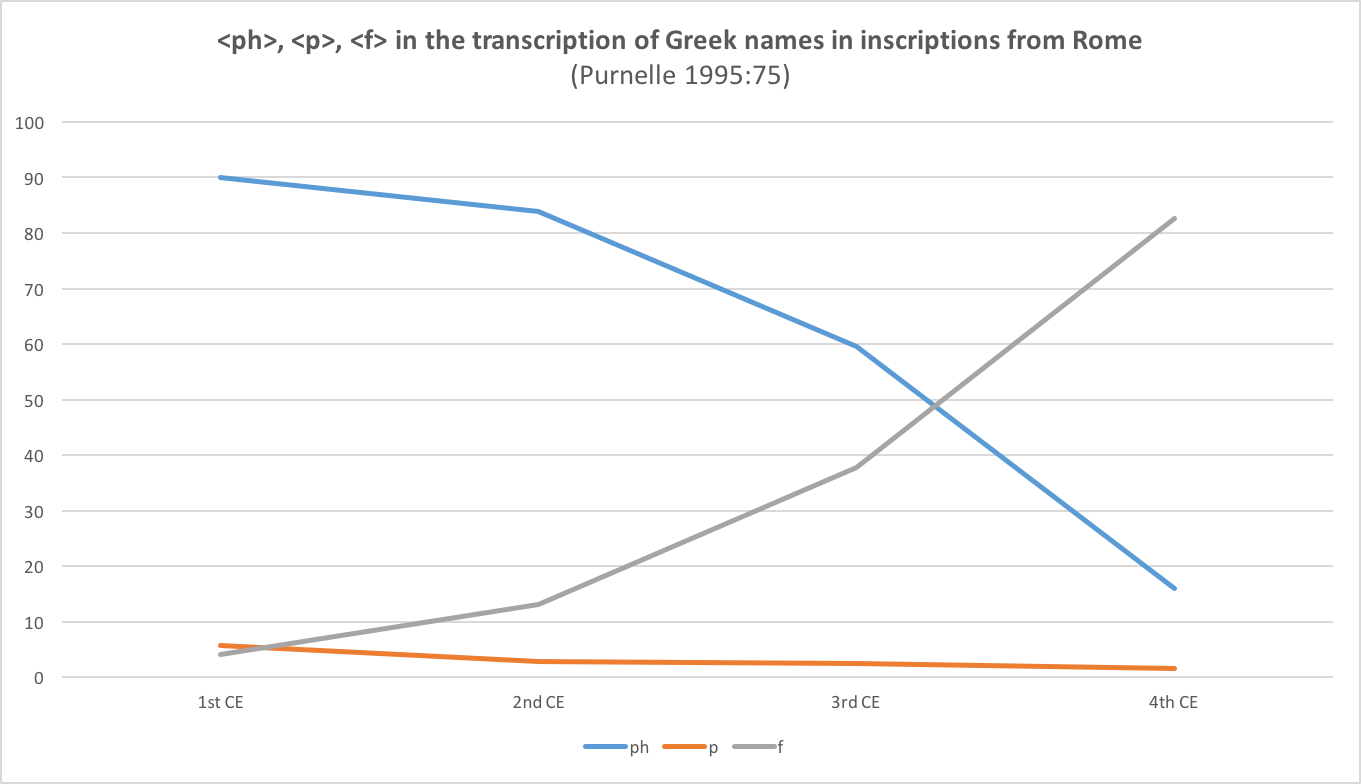 Not the answer you're looking for? Browse other questions tagged pronunciation language-evolution greek consonants aspiration or ask your own question.

13
Were 'th' and 'ch' aspirated in classical Latin?
11
What would a 5th-6th century learned Latin pronunciation have sounded like?
11
Did the Romans pronounce ph like the letter f or the letter p?
4
What is the Latin Homophonic Group?
13
How to tell when an inscription is post-classical?
5
What do we know about Homer's pronunciation?