In the Sixto-Clementine Vulgate, Genesis 22:4 reads:

And on the third day, lifting up his eyes, he saw the place afar off.

I am confused about the person in the Latin original. The English translation reads fine. 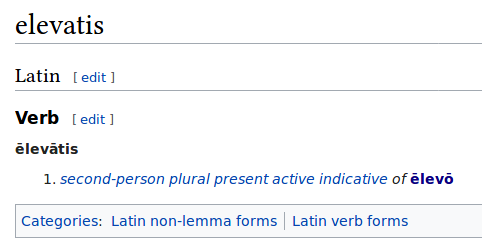 This is, elevatis is the second person plural in present tense. So the expression "elevatis oculis" seems to be something like "lift[ing] up your eyes". But that doesn't make sense in the phrase and context, which is a narration from a third-person point of view of what Abraham is doing: He got up during the night, took a donkey, some servants, some wood, and his son, Isaac, and departed to the place God had told him to go. And then the paragraph above comes. It would be natural to expect a continuation of the third person. Instead, it switches to the second person plural, which in my opinion makes no sense. Notice how the third component of the phrase reverts to the third person ("vidit"). So that second person in the middle is very strange! I would have expected something like "elevavit oculis [suis]" (keeping the past tense of the next line), or "elevat oculis [suis]" (keeping the more natural present continuous tense of the English translation [I read there is no explicit differentiation between present simple and continuous in Latin] ).

Interestingly enough, there is a similar issue in Luke 6:20:

And he, lifting up his eyes on his disciples, said: Blessed are ye poor, for yours is the kingdom of God.

Notice that looking for the "tis" declension in the First Conjugation in Wiktionary gives 15 hits, all of them in the second person plural. So I am not sure I am missing a special case here. Unfortunately, Google does not help with the translation either, as it seems to have a particular Bible translation embedded! (else, where does the Abraham come from below? odd!)

sentence-translation christianity vulgata
Share
Improve this question
edited May 2 '18 at 12:09

The second person plural form is elevatĭs, "you lift". However, in the passage you quote it is elevatīs, which is a plural ablative of the perfect participle.

It is in the same form as oculis, which is a hint. Oculis is not an accusative, so the translation "lift your eyes" doesn't quite make sense with "eyes" as the object.

What you have here is an absolute ablative elevatis oculis, "with eyes lifted", "having lifted his/her/their/our/its eyes", or similar. As ablativus absolutus typically, this is impersonal, so the best translation (especially choice of pronoun) depends on context. Nothing in elevatis implies second person (when it is read as the participle it is here) — or third person. The third person appears in the translation, but it is inferred from context. The subject of the verb elevare is that of the verb vidit and therefore third person.

The weird thing you observed with Google Translate has been explored in this older question. The point is that Google does not translate structurally and procedurally, so to say, but by comparing the text you give to a large corpus of Latin texts and their translations. The corpus is not large enough to reach sensible results with Latin and the algorithm doesn't take inflection into account as well as it should. It is comparison to Bible passages that produces the spurious Abraham.

How should one be able to figure all of this out, then? A Latin Bible is unlikely to have a breve or macron to indicate vowel quantity. It is important to be aware of the options, as it is not unusual that two or more forms look alike. Elevatis can be the second person plural form or an ablative of the participle and oculis can be dative or ablative. Only context will tell. I guessed absolute ablative because it is a typical structure. It turns out that it makes perfect sense, too. I was unable to make sense of the alternatives. Awareness of options gets you started, trial and error gets you to your goal. Experience provides hints and makes it faster.

You can consider participles as adjectives derived from verbs. They have case, number, and gender. Verbs have different kinds of forms, and it is good to keep the categories separate. Personal forms like fers do not have a case but participles like ferentis do.

If you are not familiar with ablativus absolutus (the absolute ablative), I recommend reading on it. The construction is weird at first, and getting used to it is the key to this question. If you have trouble figuring out how this kind of ablative works, I recommend asking a follow-up question.

You ask where Abraham comes from. Abraham is mentioned by name in the Hebrew original, in the LXX, and most other translations, including the KJV.

Then on the third day Abraham lifted up his eyes, and saw the place afar off.

This is an ablative absolute clause of the past participle. So, the most adhrent translation would be: "And on the third day, with [his] eyes lifted up, he saw the place afar off".

See Joonas' answer for a detailed explanation, including why the second plural form is incorrect and why Google suggests it.

Not the answer you're looking for? Browse other questions tagged sentence-translation christianity vulgata or ask your own question.

77
What is Google Translate good for?

14
Why is “repetunt” 3rd pl active in Luke 12:20 (Vulgate)?
5
Literal translation of Vulgate
3
habitabat = dwelt?
7
Is this translation of Numbers 5:3 from the Vulgate correct?
7
Why is the accusative not used in Judges 5:23?
10
Why “dilatasti” instead of “dilatavisti” in Psalm 4:2?
3
Understanding the use of “regnavit”
4
Understanding “audieritis” in Psalm 94
5
May they rest in peace
3
A Completed Action in the Mind OR Indirect Speech?