I've checked in Cappelli's dictionary of abbreviations, but there isn't an G + superscript letter or G + symbol that means gens. Here's the letter in context (and a transcription)

It doesn't like an n (for which I naively would anyways expect g̃), but I feel like it could just as easily be an e or an s over it, that is, gͤ or gᷤ. What could it be? It's used frequently in the text, but the abbreviation mark, be it letter or diacritic, seems to be unique to this word.

As mentioned in a comment, Cappelli 1.54 lists several possibilities.

I disagree, however, that this is "gͥ" (g with an i superscript). To my eye, it looks much more like a g with an o superscript, which comes out to ergo. An "o" does a much better job explaining the "e" shape (at least in the provided scan) than an "i."

Note that there is at least one error with the "literal" transcription you provided: at the end of pessima, the last letter is an a, not a "3-sign."

A more standard transliteration of the whole passage:

Here are examples from an earlier, insular, manuscript (Oxford CCC 122) which led me to think that this siglum is not gens, but igitur.
Perge igitur ad from an Insular manuscript:

In the following line there are three superscripts. The 'o' changes 'seventy-two' to 'seventy-second;' 'u' superscript t, is simply ut; and the tilde over the p is an fairly unusual abbreviation for 'prae' in 'praediximus.'

There are three reasons for thinking your siglum stood for igitur.
.1.frequent occurence.
.2.occuring second word in the clause.
.3.finally, the excerpt, after describing the number of magicians in Egypt, continues: "...it might be possible for it to be stated concerning Christ that in that place he was instructed in magic arts." The argument suggested 'so,' 'hence,' 'therefore.'
.4. the marks are more easily explained as a chunky 'i' with displaced dot cut on the printer's steel punch, than as a faulty 'o'.

Here either Ergo or Igitur would be suitable; my manuscript consistently preferred igitur; Duns Scotus, for example, prefers ergo. You could hedge your bets and state that it is unclear. The problem could be solved by searching for a passage where your source quotes ergo or igitur in the Gospel which he is commenting on. The final Chapter of Matthew would settle it.

I felt like image-editing tonight and I put together some abbreviations from pages 147 and 148 of Cappelli (1973, anastatic reprint of the 1929 edition), to compare them with the siglum in question. 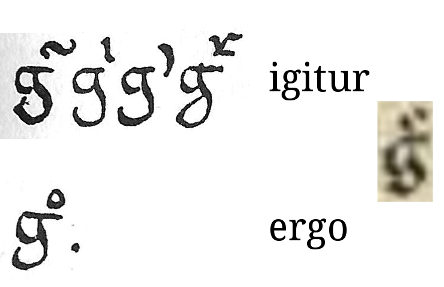 These are all the relevant sigla listed there. Note the last one for igitur: it’s gr, not gi, it comes from 15th-Century Rome, and I find it particularly convincing.

However, this is not enough for me to cast my vote for igitur with 100% certainty. In this case, igitur and ergo are almost synonyms, so you have really no problem to understand what is being said, and my advice is to go on to find further examples of either igitur or ergo, which might be clearer and would be helpful to settle the question.

OTOH, I agree with Brianpck’s other observation, that we have omni arte pessima here, and not peſſimꝫ = pessimorum.

Not the answer you're looking for? Browse other questions tagged abbreviations or ask your own question.