Is the female accusative singular relative pronoun quem or quam?

This grid on Wiktionary gives quem for the singular feminine accusative of the relative pronoun quis.

According to books by Kennedy, Gwynne and Henry Cullen this should be quam. 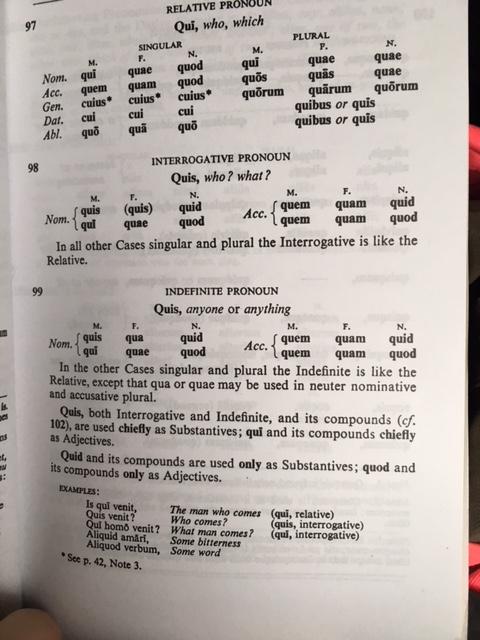 Please can you tell me which is right?

If I may play the role of arbiter between sumelic and Alex B: For a question like this it is much better to adduce citations from classical authors rather than quote a plethory of pedagogical grammars (to say nothing of Wikipedia). If Neue apud Alex B is right, the acc. sing. fem. of the interrogative pronoun occurs as quem exactly once, namely in the cited passage from Plautus’ Miles gloriosus. I think this decides the question. The canonical Latin form is quam. Quem is a unique archaic variant.

answer in progress - I encourage you to make comments or edits, or add examples -

My hypothesis (to be tested)

Interrogative determiner/adjective (ACC. FEM.SG): quam (quem is attested only once in Plautus, see the quote from Neue at al. below)

"The common form for the interrogative-indefinite and relative pronouns is quem" (Tronskii 1960: 204).

The following part is my summary of different sections found in Pinkster 2015 (all the examples are chosen from Pinkster 2015, too)

That being said, the difference between a pronoun and a determiner was not always observed. Pinkster 2015 writes that

The following information from the Latin Discussion thread "Qui, quae, quod" vs. "quis, quid", by Pacifica seems relevant, although it only specifically mentions the nominative form quis, and the post doesn't seem to have a list of references:

quis was initially common gender and may be used for a woman as well. Thus, "Who's that woman?" may translate to either Quae est illa mulier? or Quis est illa mulier? The feminine use of quis, however, appears to have been more common in early Latin than in classical.

I found another Latin Discussion thread that looks like it might be relevant that I still have to finish processing: feminine of interrogative pronoun. The original poster, socratidion, says in the opening post:

Until recently I blithely believed that the interrogative pronoun quis had feminine singular forms cuius (gen.), cui (dat.), quam (acc.), qua (abl.), but that the nominative was quis like the masculine. From Shelmerdine I learned that this is by no means the universal view, and that many books maintain that the feminine forms do not exist in the singular (i.e. one would always use the masculine), but do exist in the plural.

Among those who list feminine singular forms for the interrogative pronoun are: Jones/Sidwell "Reading Latin", Betts "Teach yourself Latin', Kennedy "Latin primer".

As I mentioned in the first paragraph, I actually don't think I have yet read any sources that say that it is correct to use quem as a feminine relative pronoun.

I found this usage called a mistake in a document "Notes from Carthage", by David R. Jordan (aus: Zeitschrift für Papyrologie und Epigraphik 111 (1996) 115–123), which discusses some inscriptions found on curse tablets from the Roman Imperial period:

As is common in magical texts from as early as the 1st century of our era, the intended victim is given maternal lineage [I removed irrelevant notes about Greek spelling errors, which Jordan says may be compared to] mistakes on other curse tablets from Carthage, e.g. [...] quem for quam in the Latin expression of this phrase in 3 below.

After a feminine name in the expression of maternal lineage we expect not quen but a quam. The same mistake in gender occurs on three curse tablets from Hadrumetum, DefixTabAud 264–65 (Victoria, quem peperit sua uulua) and 266 (Vettiam, quem peperit Optata). In formularies the words quem (or quam) peperit were often abbreviated to q p (Jordan 1976), and in fact the abbreviation occurs, unresolved, at 248.6, [Ades]icla, q p Victoria (Carthage); cf. 300(B).2 [S]iluanu[m,] q p uulua (Cirta). Use of a formulary and careless resolution of its q p could explain the mistakes here and in 266.13

13 For quam > quem Jeanneret 1918:79 attempts a phonetic explanation, invoking the early history of the French language. It is striking that from the Hadrumetine curse tablets he is able to cite only one instance of quam>quem (Bonosa quem uobis . . . commendo, DefixTabAud 268.10) in a phrase that is not part of the formula for maternal lineage.

I realize this is a kind of weird and obscure source for information about Latin relative pronoun usage, and it's not the main topic of the notes, but based on what Jordan says here it seems that the use of quem for a feminine accusative relative pronoun is apparently quite uncommon, not expected, and treated as a mistake, at least in the time period when these tablets are supposed to have been written.

My conclusion would be that "quam", not "quem", is certainly the correct feminine accusative singular relative pronoun.

Not the answer you're looking for? Browse other questions tagged relative-pronouns or ask your own question.