"Fighting with someone" and the different uses of "with" in Latin

I am learning latin on my own and I came across this (quite comical) picture. 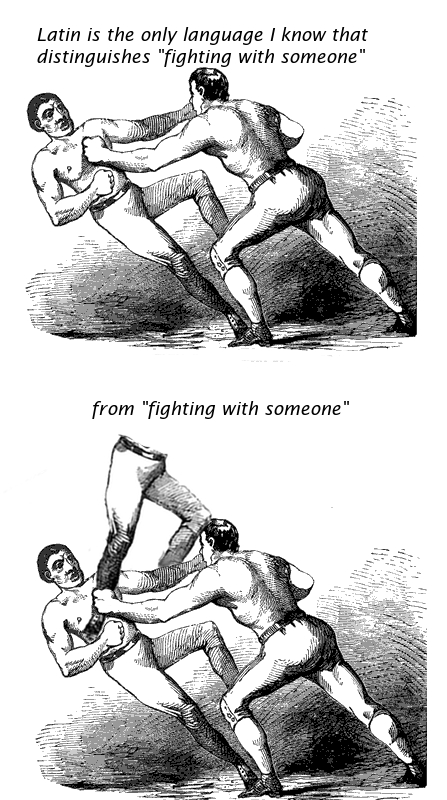 With is such a versatile word in English that how's it actually being used is sometimes obscured. Consider the following:

I am going to the store with my friends.

I am making a house with the best tools.

With is used in these sentences, but they're using it very differently. The first expresses accompaniment: the friend are coming along. The second expresses means: the job is accomplished by means of an object.

There is no one Latin word that encompasses all the varied uses of with. There is, instead, a combination of uses. This is typically accomplished by three different constructions.

Note: some of the examples I give come from Moreland & Fleischer or Gildersleeve & Lodge.

The first is the ablative of means, as mentioned above. For expressing "with = by means of", all you need is a simple ablative.

Nautae gladiis pugnant. | The sailors fight with (= by means of) swords.

Note that you can substitute "with indulgence" or "indulgently", but you cannot do that for the means or accompaniment "with."

The third way to express with is with the ablative of accompaniment. This is the first one I explained above. It also looks identical to ablative of manner, except that you cannot replace it with an adverb.

In English, sometimes qualities of a noun are denoted with with:

There's that girl with the ugly nose.

In Latin this is typically constructed with the ablative, though sometimes the genitive is used instead:

Gildersleeve notes about the distinction between the ablative and genitive here:

External and transient qualities are put by preference in the Ablative ; Measure, Number, Time, and Space are put in the Genitive only ; parts of the body in the Ablative only. Otherwise there is often no difference.

While there are other uses of with in English, this should give you a good sense of what is common.

One last note, though, about the words you listed.

Per plus the accusative can substitute for the ablative of means, but the means are less physical and more abstract, and usually impute some sort of authority or intentionality. You can typically use "through" for per, though.

Not the answer you're looking for? Browse other questions tagged vocabulary semantics preposition differences or ask your own question.