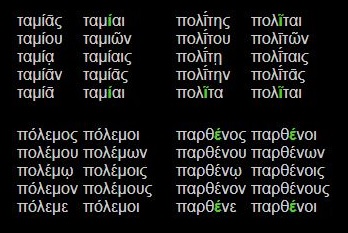 Question: Is there some general principle to explain the lack of recession in those words?

By recession, of course, I mean what one sees in πόλεμος. The accent wants to sit as far away from the end of the word as possible (given certain rules).

The lack of recession in παρθένος, I put down to, as it were, 'the word forming an exception.' In a manner of speaking, I am assimilating this exception to that found in words such as ἀγορᾱ́, τῑμή, κριτής and ὁδός. The accent just 'wants to' fall at the end. I don't argue or try to explain it. I only hope I'll remember. In the same way, the accent just wants to sit on the penult in καρκίνος and παρθένος.

The pattern in ταμίᾱς and πολῑ́της however seems more tricky, for two reasons.

Therefore my working hypothesis is that there is a subgroup level exception to recession for long vowel first declension nouns. It would go like this:

First, let us set aside words accented on the ultima such as κριτής and μαθητής. As for the rest, accentuation is recessive for these subgroups except where the word ends in -αι, in which case the accent 'forgets' to recede.

The question stated above really stands in for the following diffuse cluster of thoughts.

In general I am trying to 'motivate' these various types of exceptions to recession.

You're actually going about this the wrong way. Although it's true that the accentuation of verbs is generally recessive, the accentuation of nouns (and adjectives) isn't; it's generally persistent instead. The accent will remain the same type and in the same location unless it's forced to move or change by, e.g., the quantity of the ultima or some special rule. The nominative singular form tells the base accent for a noun or adjective, and that accent doesn't have to go as far back to the beginning of the word as possible.

Not the answer you're looking for? Browse other questions tagged greek pronunciation or ask your own question.

4
Different ways to accent active aorist infinitives ending in 'αι' (Greek)
7
What determines the conjugation of verbs borrowed from Greek?
11
Why νώ (rather than νῶ) from νόω? (Greek)
8
Do non-Attic-Ionic dialects distinguish the accusatives of the ἀσπίς and χάρις types?
9
Hexametric Greek names
6
In ancient Attic Greek, how (un)stable were "ΝΣ"/"ΝΖ" and preceding vowels?
10
Are there minimal pairs between the acute and circumflex accent?
9
When did the difference between acute and grave disappear?
2
Why is no one pronouncing the final 'm' as a nasal vowel?