Could anyone help me understand the meaning of the Latin in this Jodocus Hondius map from the early 1600s?

I know very little Latin but have managed to figure out via Google Translate that "Freti Magellanici" is the Strait of Magellan (which is what this map is), but the rest of it is unclear, something about "exquisite and great danger for several months examined and already unveiled" which doesn't quite make sense. 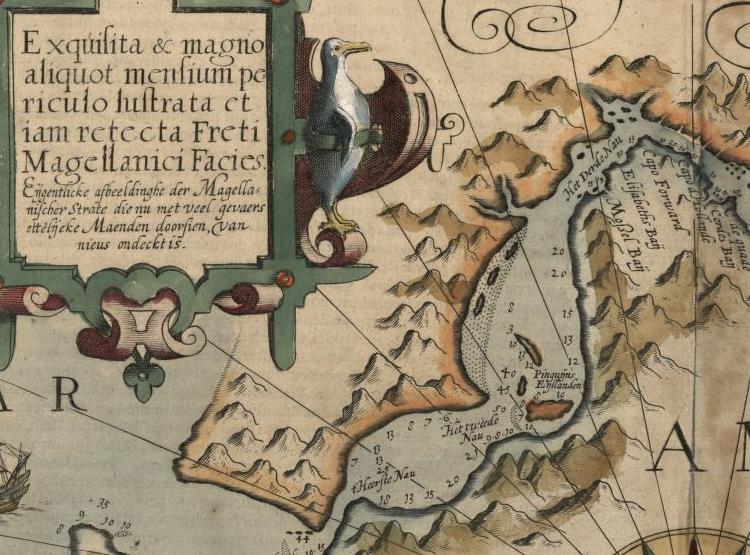 for what it's worth: from looking at C.M. Weimer's answer, the Dutch that follows may be the same text in both languages:

which I'm not sure about either, except that "Eijgentlicke afbeeldinghe der Magellanisher Strate" means something like "authentic image of the Strait of Magellan". "Maanden" (not Maenden) in modern Dutch is "months", "gevaarlijk" (not gevaers) is "dangerous", "ettelijke" is several/some, and "ondeckt" is "discovered"... "nu" is "now", "met" is with, "veel" is "many", "nieuw" is new/recent, but I can't figure out what "doorsien" is, so a literal translation would be something like

Authentic image of the Strait of Magellan, that now with many dangerous several months ???, from recent discoveries.

Ooh: here we go, I found something about doorsien:

Doorsien is a Dutch word that literally means "plunge through." Dutch painters were particularly interested in views into the distance, which they called doorsien

Authentic image of the Strait of Magellan, that now with many dangerous several months of observation, from recent discoveries.

Since Jodocus Hondius was Flemish (Joost de Hondt / d'Hondt), it makes sense to interpret the Dutch first, and then treat the Latin as a translation in our analysis.

So the Dutch is best translated as follows:

"Faithful depiction of the Strait of Magellan, which now, surveyed with many dangers for several months, has been revealed anew."

The Latin words seem to be all translations of Dutch words, except that the syntax has been shaken up a bit:

A literal translation of the Latin would be as follows:

"Accurate & surveyed with the great danger of several months, and now revealed (anew), the shape of the Strait of Magellan."

"Accurate representation of the Strait of Magellan, revealed anew with great danger after a survey of several months."

The shape of the Straits of Magellan, accurate and illuminated with great danger of several months and now laid open [for all to see].

I understand facies as referring to the shape of the straits, which must have proven tricky for navigators. The islands and shadows seem to support that idea.

magno aliquot mensium periculo must mean a particular danger that is associated with certain bad months, such as winter in the Mediterranean. The idea is that the shape was figured out and illuminated during dangerous sailing seasons, however, now that it's figured out, it's no longer a mystery for ships to take them.

Exquisite isn't really the right meaning here. As you know, exquiro means "to search out diligently," and so this map is the result of diligent inquiries into the shape. It could either have that force, or, more simply, "accurate," but both are implied in the word simultaneously.

Not the answer you're looking for? Browse other questions tagged sentence-translation new-latin or ask your own question.