There are apparently numerous versions of these lines. I only have access to two1 however: Edmonds':

Now that is a big difference, even outside lacunas. So I tried looking at Grenfell and Hunt's edition of P.Oxy. 1231, whence the poem mostly comes (see below for more), and found:

That seems to scream "Go Edmonds, screw Campbell". But let's look at the notes to the transcription. What I gather from them is:

they are apparetly giving us a nice bit of bull… err, tauricopria. Or maybe they are mixing up papyri. There are two more papyri this poem comes from. One is PSI 123, 1-2, but that only gives the last line, τ' ἐξ ἀδοκή[τω], which gives no trouble. The second one is P.Oxy. 2166(a), published in volume XXI. Unfortunately, I can't find anything online about this: no images, no transcriptions. Campbell's critical notation suggests it must have read at least:

plus the first 5 letters of the following line and the first 2 of the one after that. This implies a papyrus conflict: l. 9 is different from one papyrus to the other, and doubtfulness cannot solve the problem. So we are faced with two options:

So my question is: does anyone have access to anything that can shed light on what was actually on 2166(a), and/or to something pointing out extra margins of doubtfulness in 1231 to settle this dispute?

1I also have a couple slightly different versions (which basically only differ in the lacuna at v. 8), but I kept the above two as prototypical, and also because all others have no critical notation. Researching again only yielded The Complete Poems of Sappho, giving Cox's version as reading κρίννεν ἄριστον. Maybe safopoemas.doc contained other versions. But that's beside the point anyways, so I won't look into it.

PS If you're thinking of suggesting I buy the Voigt and/or Lobel-Page edition of Sappho, don't. I'm already thinking of getting them for Xmas.
UPDATE: The dream is dead, but I may manage to borrow Voigt from a library if I find a way to get it from Brera library to one closer to the places I usually frequent.
UPDATE 2: The Voigt dream is dead, but I did buy Lobel-Page, and it's soon gonna be brought to me from England. Lobel is the editor of P.Oxy. XXI, so having an edition of Sappho coauthored by him seems like a good chance of finding answers. Also, Mr. Weimer in the comments offered to check if his library has that volume and look at the pages that may be relevant to this poem and the Gongyla one, that is:

That would be great. And I found that on Amazon, but the cart had already been purchased and this book costs and needs shipping which would be free if it were in that cart, so that will have to wait at least till next Xmas.

According to this, 2166(a) is not a source for this poem1, whereas something in P.Oxy. vol. XXI is. I have also managed to find that volume on Amazon, so I may buy it.

1Unless of course 2166(a) is in that volume, which should start at 2292, meaning the numbering doesn't line up with the volumes.

Looking at Campbell again, I saw that P.Oxy. 2166(a) is said to be in Ox. Pap. XXI, so yeah, for some reason, the volume starts with 2292 and contains 2166(a). As if Oxyrhynchus papyri numbering weren't already weird enough… 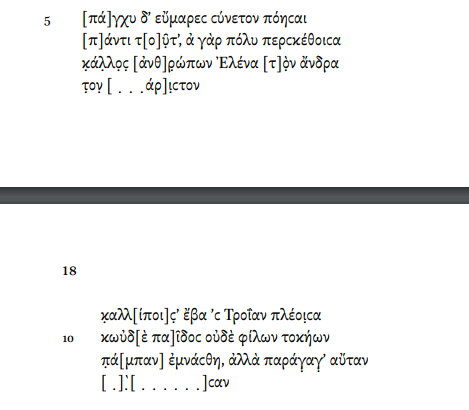 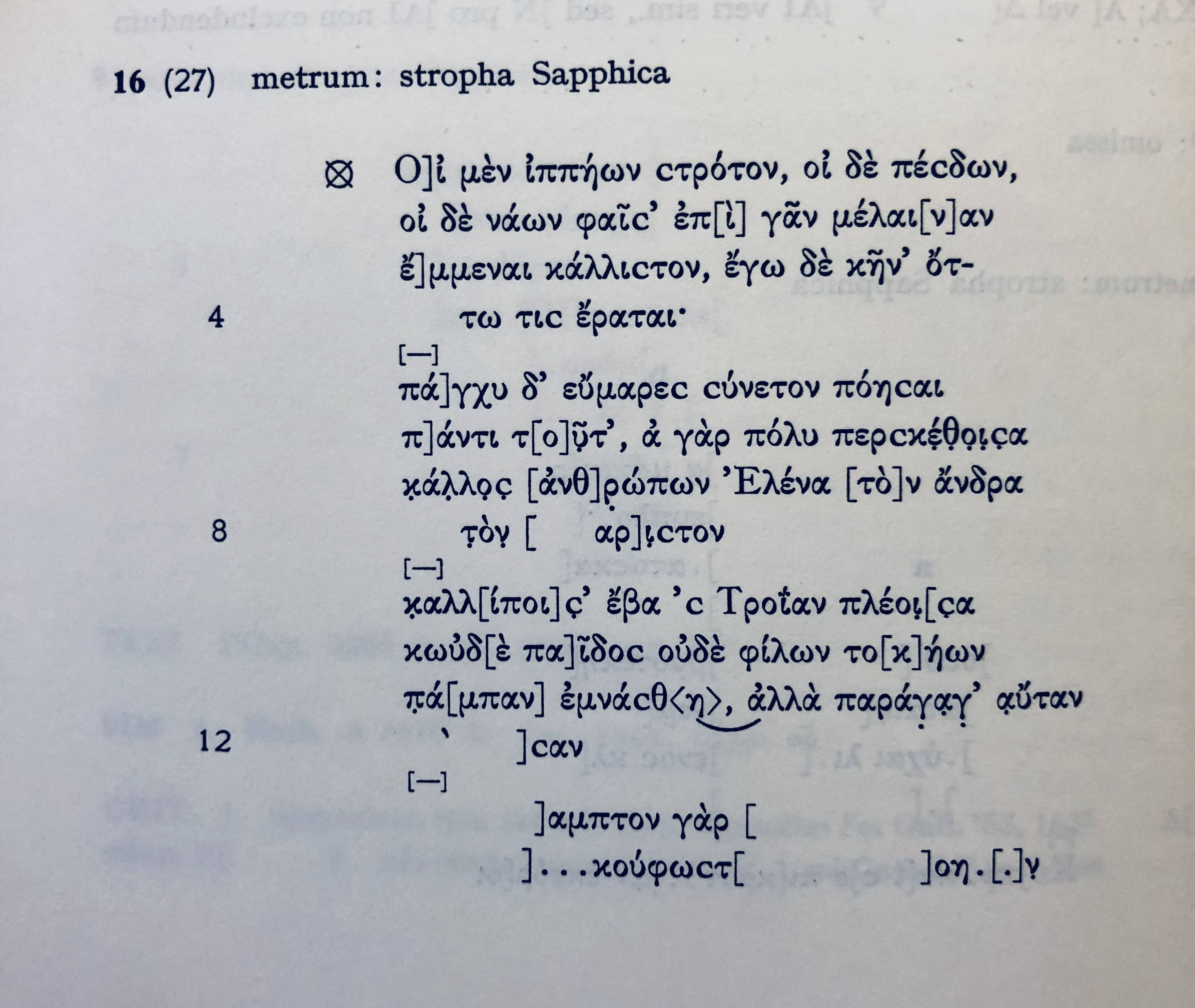 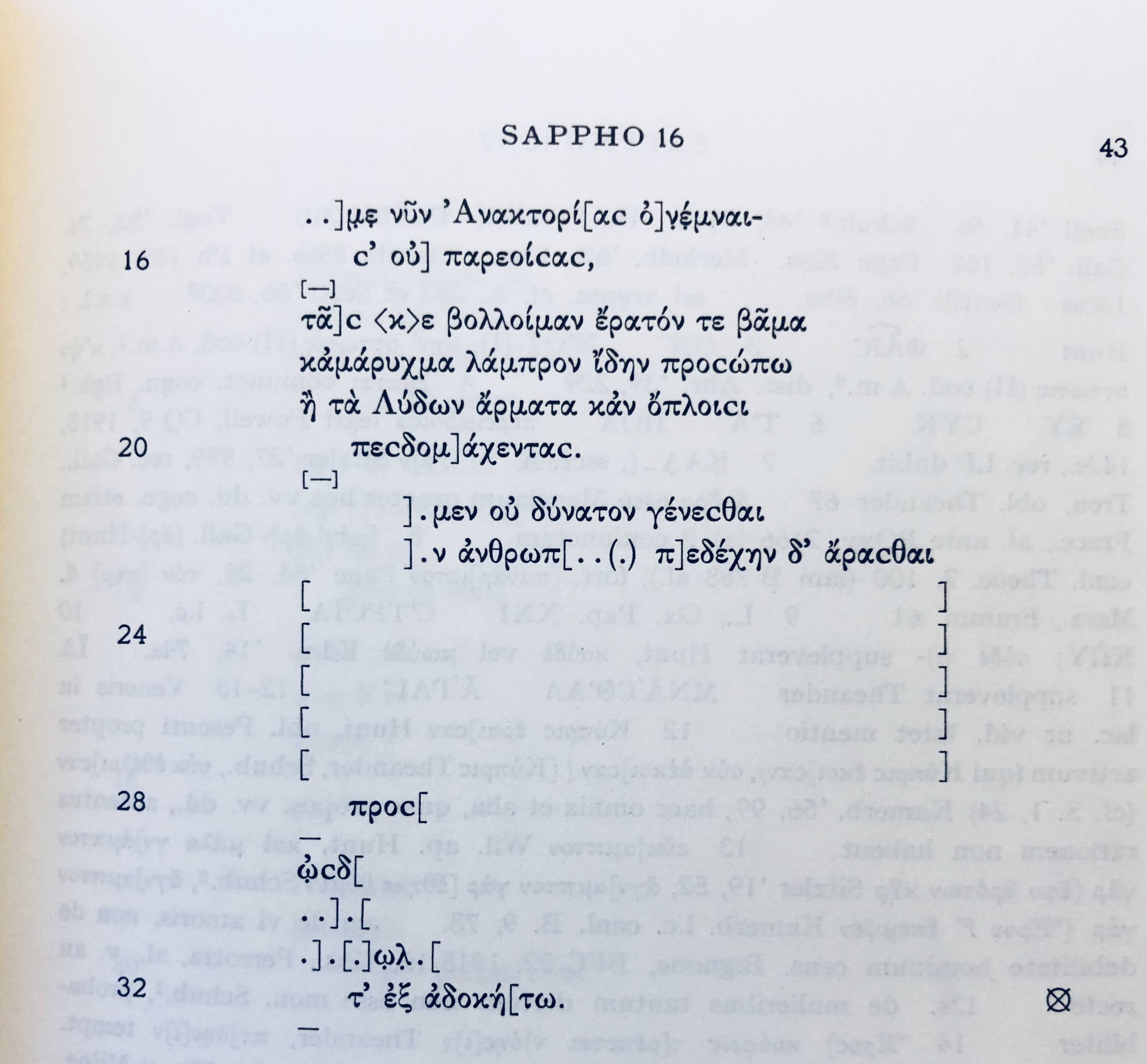 Testimonia and critical apparatus in Voigt 1971: 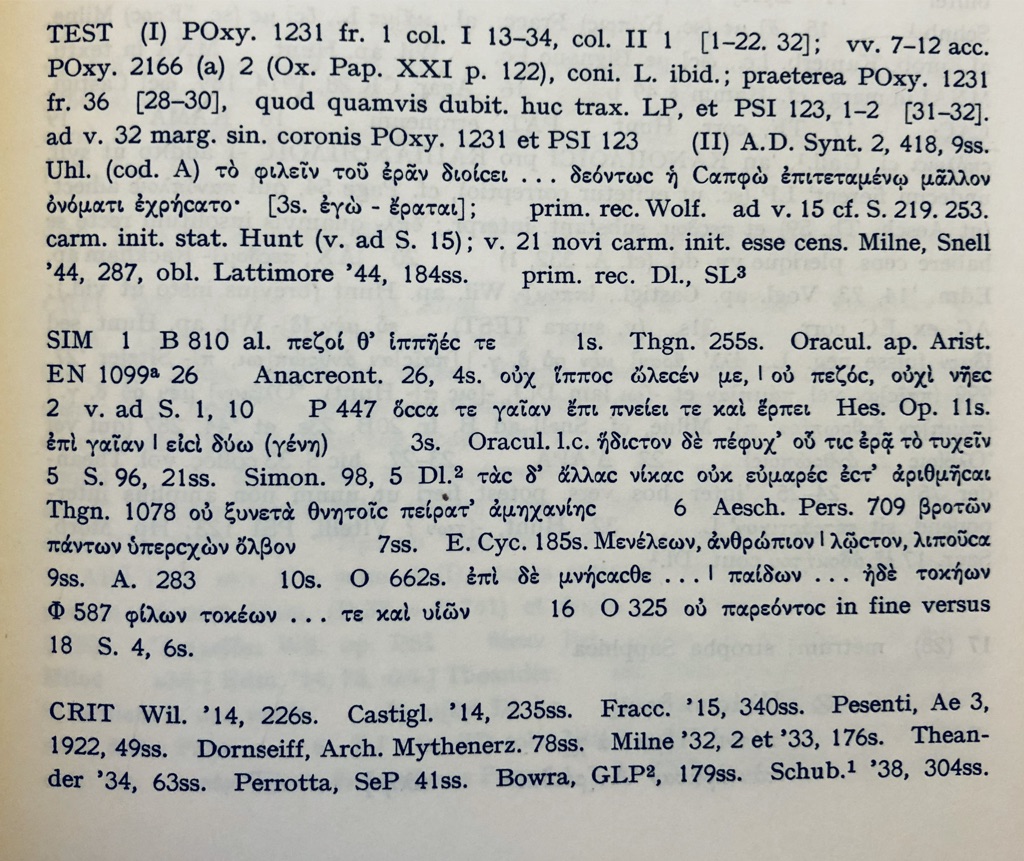 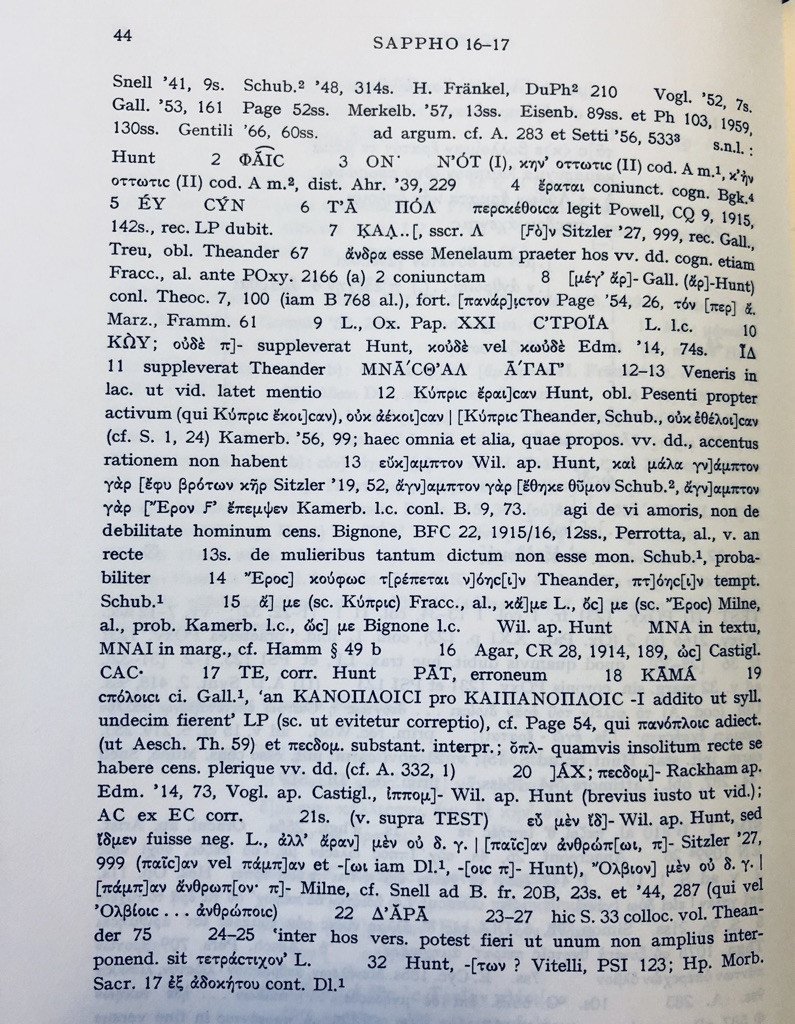 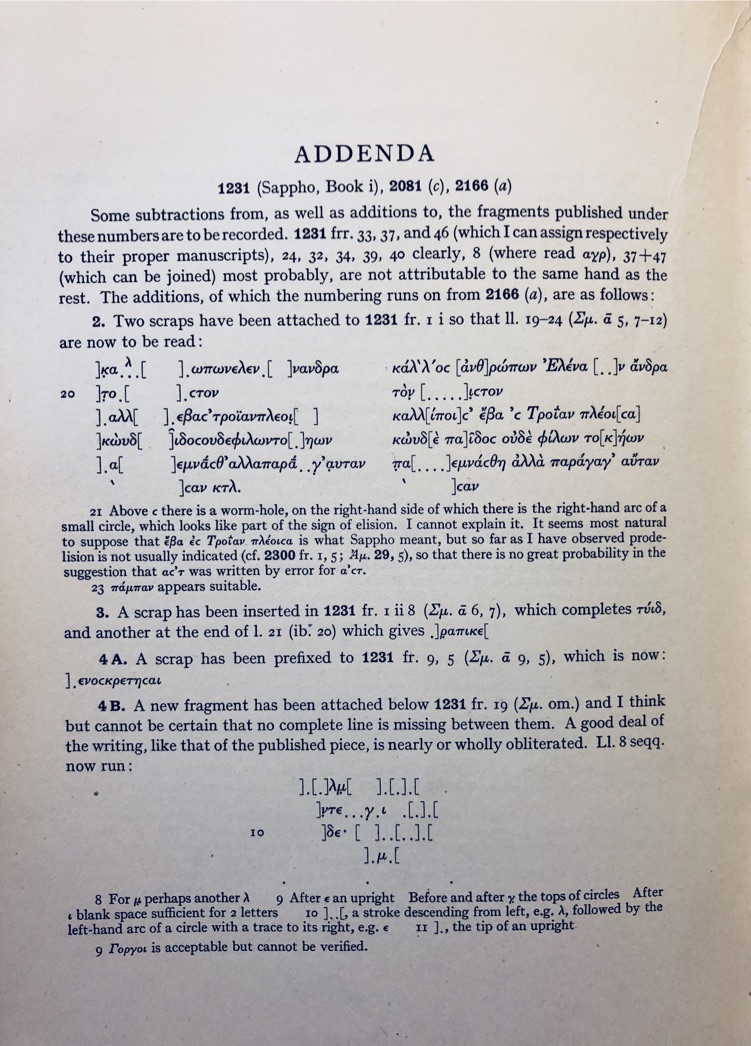 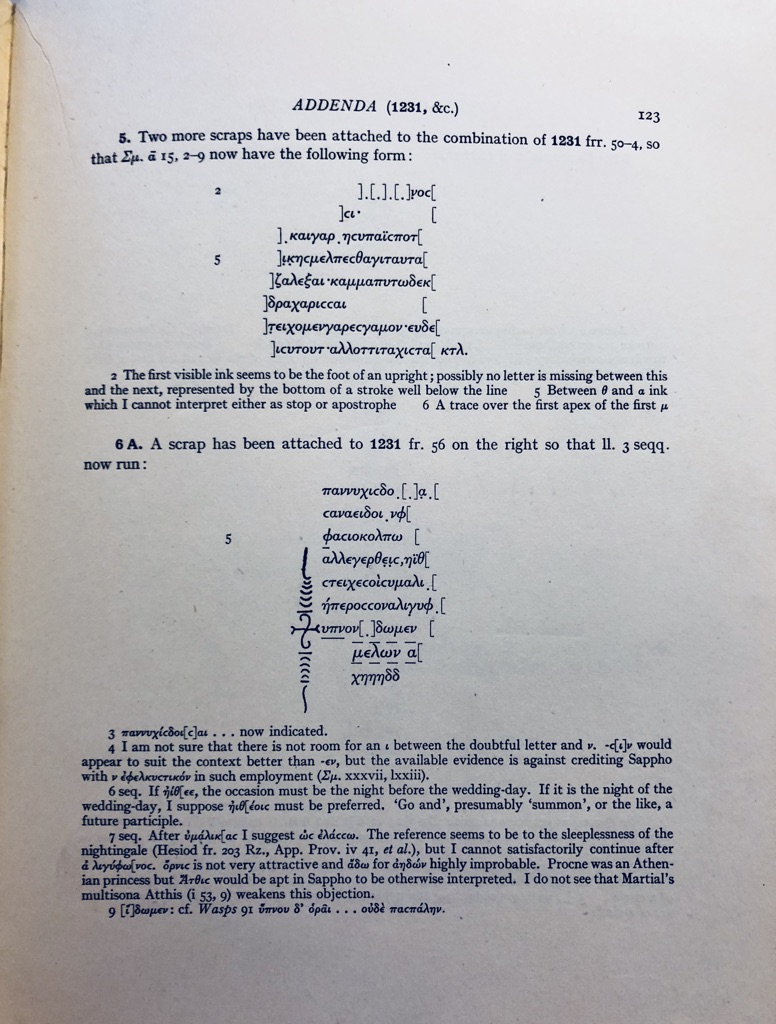 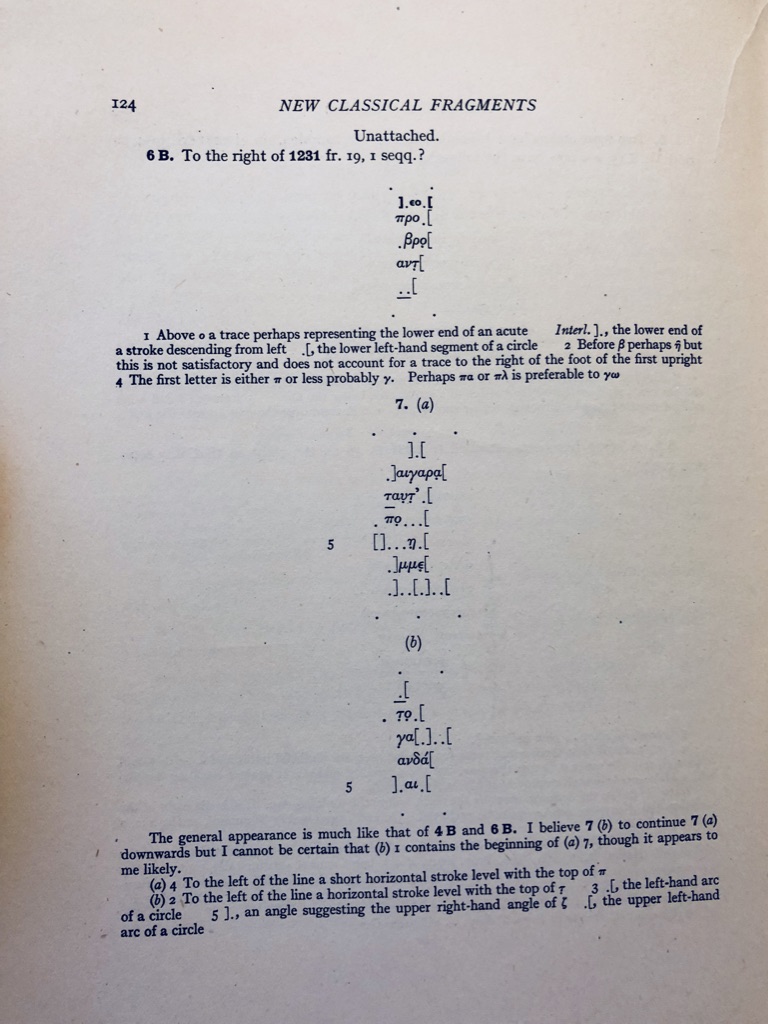 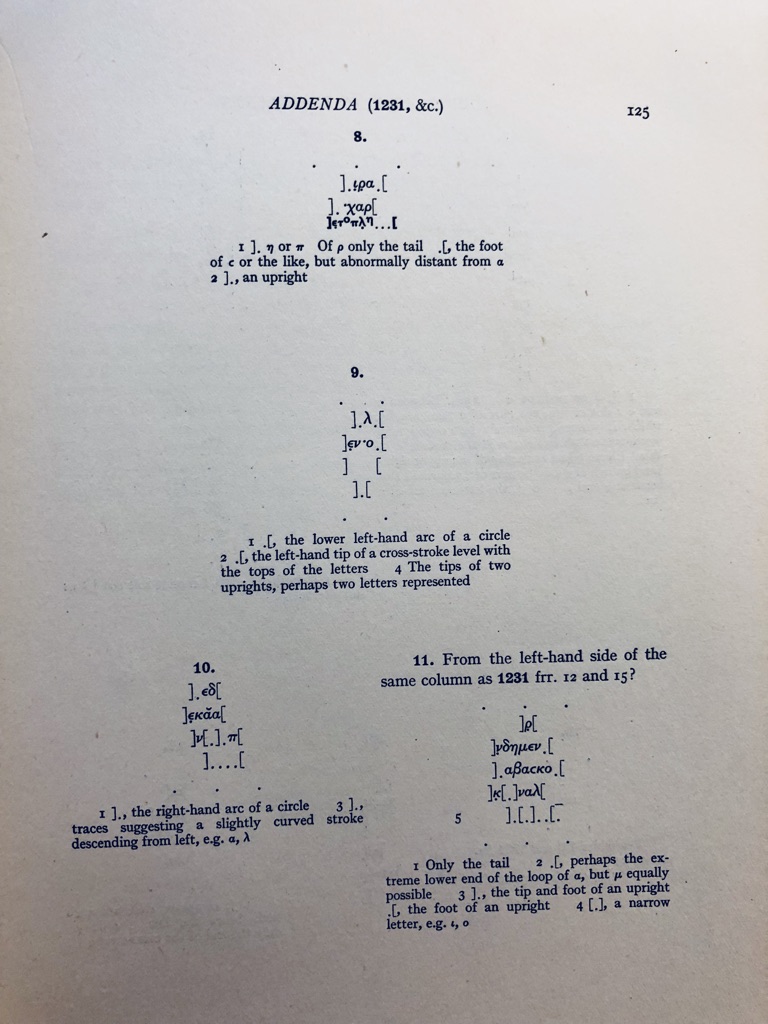 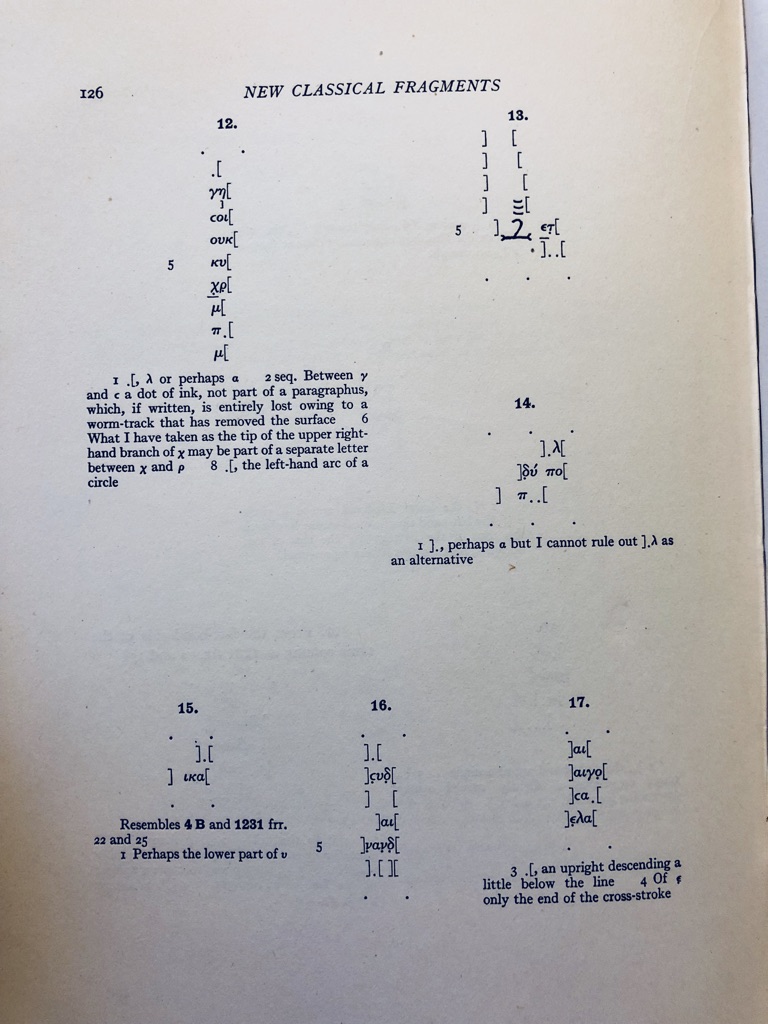 Not solving the problem entirely, but ahem-b-ok-ahem furnished me with an image of P.GC. inv 105, where on fr. 2 one can clearly see the endings:

The final lacuna is actually not a hole, but no letter can be fully seen before the AI at the end. Vestiges are visible, though:

With that, the ending of that line might be ΜΑΥΤΑ, which suggests comparison with a previously known fragment, a quote by Ap.Dysc., reading ἔγω δ' ἐμαύτᾳ / τοῦτο σύνοιδα.

This certainly settles all our problems, modulo the line beginnings, which means the problem of l. 8 stays, but the rest is settled by these endings. However, this papyrus was published in 2014, well after Campbell published, so the problem of why Campbell had these readings remains, and new problems with older restorations are caused by the new endings in stanza 4 and stanza 6 (last one). But that is another story.

As AlexB's answer made me notice, the ahem-b-ok-ahem finding mentioned above tells me that this mysterious extra source preserves only a grave accent in l. 12 (aka last line of stanza 3). Interesting info, but doesn't settle the problem of this question.

8
Did P.Oxy. 2288 contribute in any way to our knowledge of Sappho's hymn to Aphrodite?
4
On what basis does Campbell put P.Oxy. 1231 fr. 12 together with fr. 15? And why does Edmonds not? And why does C read more than Grenfell and Hunt do?
3
About the Sappho fragment containing Doricha's name that was found first (Campbell 15, Edmonds 37)
4
About the “Gongyla poem”: who proposed the perfect imperative?
3
About certain emendations to Sappho Edmonds 76 Campbell 147
8
About Sappho Edmonds 89 Campbell 48
4
About P.Oxy. 1787 fr. 9
2
Tracing apparent book-IV colophon not found in Voigt but found in a Spanish Sappho book based on Reinach's French edition
3
Tracing mysterious line ends in a combination of Sappho fragments found in an Italian anthology