Edmonds' edition of Sappho has great eagerness to fill gaps in papyrus texts. One example of this is fragment 12 (in Edmonds' numbering), which in Edmonds reads:

If to me the paps existed having obtained milk, and the ἀρμένα made a δολόφυν of babies, then with not trembling feet I would go to new beds; but now old age already goes around our skin with thousands of wrinkles, and love no longer flies in our pursuit, the pain-giver.

If my paps could still give suck and my womb were able to bear clnkh-en, then would I come to another marriage-bed with unfaltering feet ; but nay, age now raaketh a thousand wrinkles to go upon my flesh, and Love is in no haste to fly to me with his gift of pain.

Now this question is about the words I left untranslated: what are they? δόλοφυς and δόλοφυν are nowhere to be found in my references, so I thought maybe it was a dialect alteration like κίνδυν for κίνδυνος, which others have reported in Sappho, but δολοφυνος and δολοφυνον both yield the same result as δολόφυν. As for ἀρμένα, all I find is ἄρμενα, which doesn't fit the meter because a long final vowel is required. Thinking again, the κίνδυν case is reported with -n nominative and -na accusative, which would make δολόφυν a nominative and probably the womb, and ἀρμένα maybe aeolic for ἀρμένη, "if provided [with what though?]". SO the translation would read "[…] and my δολόφυν (womb?), if provided [with what?], made …" oh wait, that genitive wouldn't fit then.

So how does this sentence work? What are those two words? Is my second guess right? And if so, what is that genitive doing there? Wouldn't an accusative (direct object), παῖδας, be better in there then?

I just reread my own poetic Italian translation of this, and it suggests armena might mean "suitable". perseus doesn't quite confirm this, but this hypothesis brings me to believe poēsei is not a verb, but the dative of the verbal nuon poēsis, and the translation needs to be rewritten as:

If to me the paps existed having obtained milk, and the δολόφυν were suitable for the making of babies, then with not trembling feet I would go to new beds; but now old age already goes around our skin with thousands of wrinkles, and love no longer flies in our pursuit, the pain-giver.

This leaves the hypothesis on armena to be checked, and the origins and meaning of dolophyn to be cleared.

I woke up this morning, connected to the Internet, and found TKR's comment. I tried to do some more research.

I opened my big dictionary and looked for ἄρμενος, finding a redirect to ἀραρίσκω after a translation to «adatto» or the likes, hence «suitable». Here is the entry I was redirected to, or rather the relevant part of it: 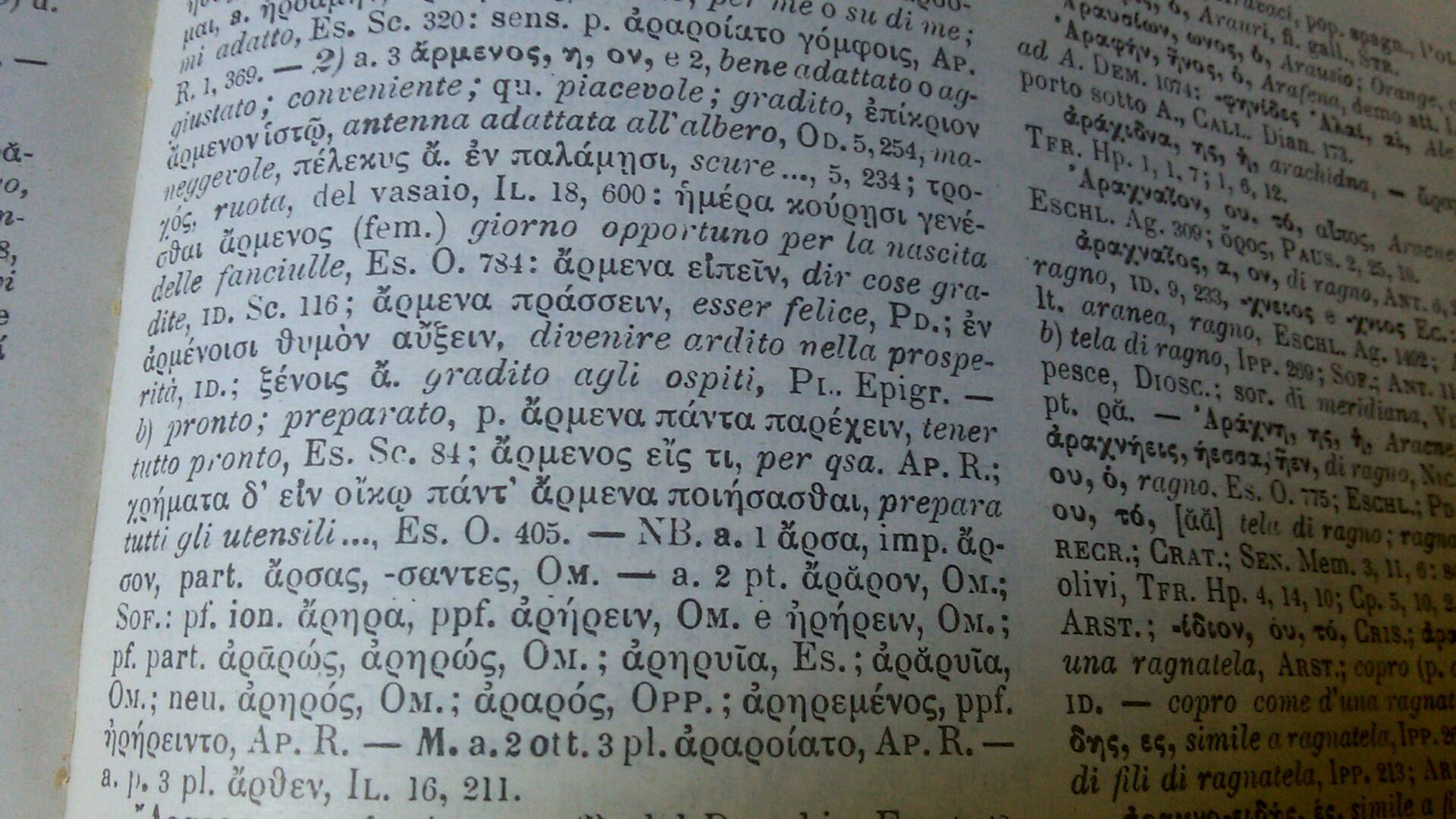 It gives meanings «well adapted; convenient; thus pleasing», and further down «ready». The example it gives for "suitable" is ἡμέρα κούρῃσι γενέσθαι ἄρμενος, "opportune day for the birth of children". The analogous construction would be παῖσιν δόλοφυν πόησθαι ἀρμένα, which probably has too long a suppletion for the last word, besides a different reading for the uncertain ε̣ι, and would probably have a non-Aeolic for (Aeolic would be παίδεσσιν, right?), so I guess Edmonds went creative and invented a reasonably likely but apparently unrecorded construction.

The entry for δελφύς only gives Doric δελφύα, and no Aeolic form. Here is Edmonds' note to the word (wish I'd looked at that earlier):

So yeah, Edmonds went creative again, and supposed this Aeolic form, where the -ν ending is justified by those forms, which are recorded by other authors (I know so for κίνδυνand suppose as much for Φόρκυν), but the change in the "root" (δελφ -> δολοφ) is entirely his guess. I mean, perhaps ε->ο can be sorta-kinda justified by analogy with some α->ο changes (like ἀνία->ὀνία in Sappho 1), but the extra vowel… pure fantasy :).

Quoting TKR's comments to this answer:

The vowel change is not quite that fantastic since (a) for the first ο there is a Hesychean gloss δολφός = δελφύς and an inscriptional variant Δολφοί = Δελφοί, and (b) for the second ο there are occasional, though rare, examples of anaptyctic vowels in similar environments, e.g. Τολοφώνιος = Τολφώνιος, Σαλαμόνα = Σαλμόνη. I'm actually more skeptical about the alleged -ν in the nom. sg.; for the alleged κίνδυν and Φόρκυν it seems we only have oblique cases attested, and as third-declension animates the nom. should end in -ς (or so I'd assume).

Do you happen to have a link to a scan of the papyrus, btw? I'm curious how secure the reading δολοφυν is.

Concerning the -ν nominative, I don't know about Φόρκυν, but here is a mention of κίνδυν by Choeroboscus in On the canons of Theodosius, possibly a gloss, as reported by Campbell:

Now this seems an attestation of nominative and genitive to me, and Campbell agrees about the genitive thing, so it could at most be accusative-genitive, which doesn't seem like a sequence that makes sense. So I assume Aeolic has this weird -ν nominative for this word, and this makes δόλοφυν nominative seem likely.

As for the papyrus, this is P.Oxy. 1231 fr. 10, and no P.Oxy. 1231 is available scanned online (which is a shame since many Sappho poems come from 1231…). However, these papyri were published in vol. 10 of Grenfell and Hunt's P.Oxy. series, which is available online, and gives this raw transcription: 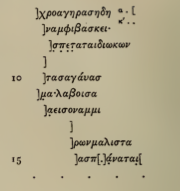 Since δόλοφυν has no underdots, and is mentioned as an unknown form in the notes:

I assume it's pretty much undoubtable. The same cannot be said for the splitting of the words, seen as Campbell has ]δ' ὄλοφυν[ or something like that.

Interesting. Campbell seems to be quoting a gloss, but it's possible that the author of the gloss reconstructed what they thought the nominative should be; LSJ says "dat. κίνδυ_νι (as if from κίνδυν)", implying the nominative is unattested.

The author of the quotation is from the early 9th century, so the gloss hypothesis seems likely, and I guess we cannot know if he had a nominative under his eyes or if he reconstructed it, which gives this form even more mystery. Besides, even Campbell's ὄλοφυν, translated to "pity", is mysterious: where is it from? Perseus doesn't have it… Anyways, I guess this form will be uncertain up till we find another papyrus with this poem that gives us maybe the line beginnings and confirms, or destroys (as happened with tons of conjectures for another fragment when this papyrus was found), Edmonds' completion.

What if instead of ἀρμένα [armena], the restoration is ἠρμένη [ērmenē] > Perfect Participle Middle/Passive Feminine Nominative Singular of αἴρω (airō, “to carry”)? Then the translation would be "If my paps could still give suck and my womb were able to bear children . . ."

My name is Allan Loder (PhD student at Wycliffe College, UofT). In terms of my research, I am currently working on a revision/update/expansion of Moulton and Milligan's 'Vocabulary of the Greek Testament' (published in 1914-1930). I recently came across an inscription with a similar issue:

3
Sappho 94: the Spaniards' completion
8
Did P.Oxy. 2288 contribute in any way to our knowledge of Sappho's hymn to Aphrodite?
2
Why does Athenaeus say this is not Sappho?
3
About Sappho 16, ll. 6-9
4
About the "Gongyla poem": who proposed the perfect imperative?
6
Identifying corrupted Sappho fragment or mention of Sappho found in just-newly-found-online Spanish edition of Sappho
3
Identifying alleged Sappho fragment from mishmash on otherwise generally good online resource
3
Figuring out the grammar of Edmonds 57 (Edmonds' version of the part in cruces of Lobel-Page 46)
2
Two Sappho-related reference requests