The verb fieri has an unusual conjugation, and one of the weird aspects is the long I before many vowels: fīō, fīās, fīet… Why is the I long? Does the origin of the verb (which I have no idea of) explain this behavior?

I do not remember any other verbs that would have a long vowel before the -ō in the first person singular present indicative, although short ones are common (facio, ruo, luo, eo…), and the long I is against my rule of thumb concerning vowel quantity in verbs. This particular I feels like an outlier in Latin conjugation, and I can't make any sense of it.

The paradigm of fio is quite unusual - see its present indicative partial paradigm (fīmus and fītis are pretty much regular; from my undergrad textbook, Sobolevskii 1948): 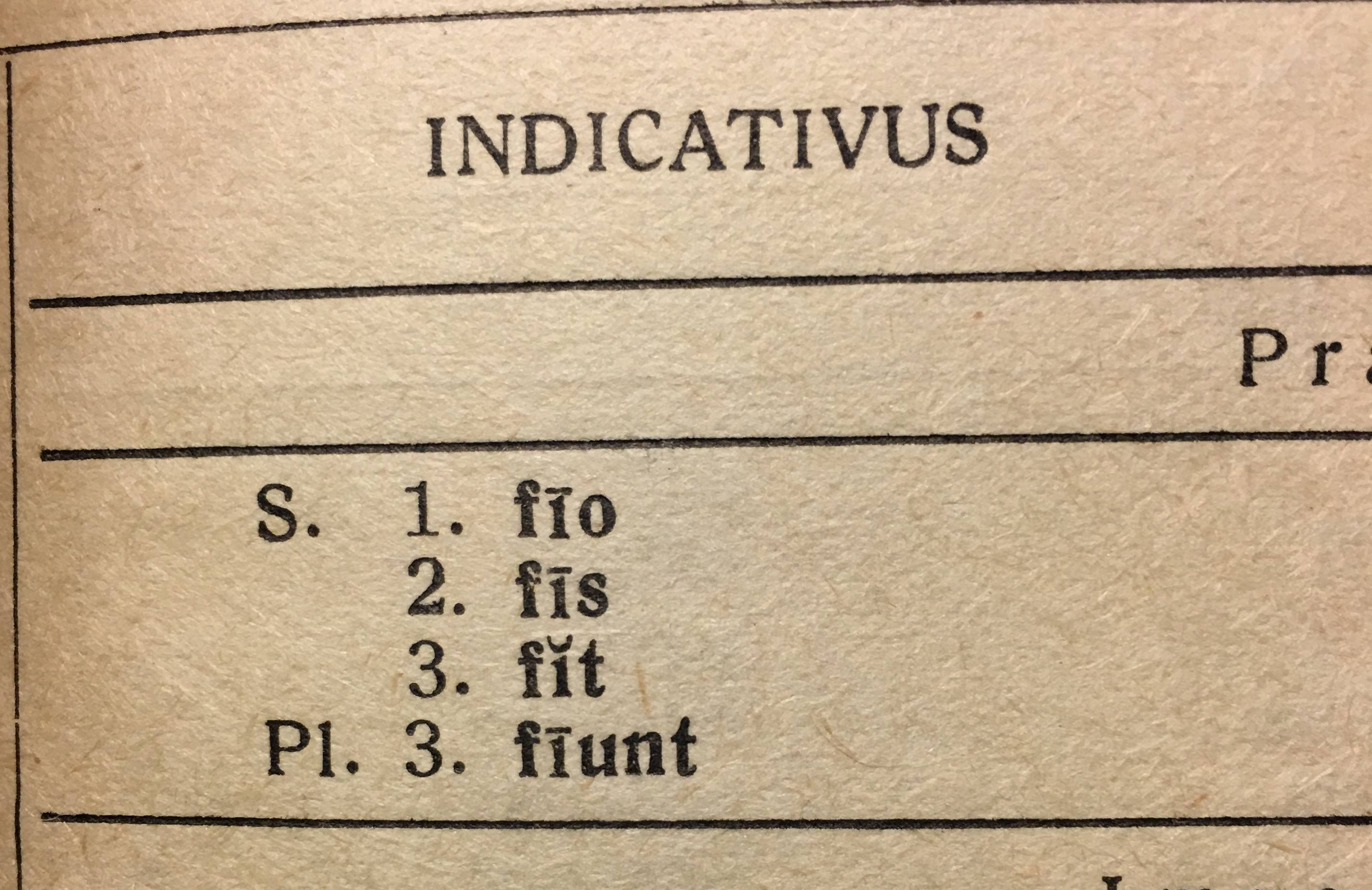 It seems this explanation goes back to Sommer 1902 (at least, that's what Leumman 1977 mentions, a later edition though). Here's what Sommer suggested (p. 589):

So, Sommer hypothesized that ī was "restored" in the thematic forms with ī+V so that the paradigm of the verb would have fewer alternating forms. This is known as analogical restoration in historical linguistics.

cf. de Vaan "*fī - would develop phonetically in the 23s. and 12 p.pr. forms, and then spread to the other forms of the paradigm."

Sihler adds, cautiously though, that it could have happened because of a very special status of fio - "the only verb in -io with tonic accent on the i" (p. 546).

Of course, we won't find "hard evidence" - we are talking about Old Latin here, after all. But another source of indirect evidence comes from Plautus and Terence, where we can find both fĭerī (more common) and fīerī, fĭeret (more common) and fīeret etc. See Sihler (p. 546) for some interesting thoughts on this

Weiss also mentions, in footnote 10 on the same page, a very interesting observation made by Jan Safarewicz (Safarewicz 1974): ī tends to be used in those word-forms of fio when the following syllable is heavy. Tronskii 1960 argues that ī > ĭ occurred only before -er-. That being said, Leumann 1977 still writes, "Die Verteilung von fī- und fi- ist unregelmäßig" (p. 530).

Not the answer you're looking for? Browse other questions tagged verbs conjugation irregular-words vowel-quantity phonology or ask your own question.

12
How can one predict the length of theme vowels in verbs?
3
How can you tell whether prefixed ‘in-’ is the preposition ‘in’ or Indo-European ‘in-’?

10
Contracted perfect and historical infinitive
7
What determines the conjugation of verbs borrowed from Greek?
12
Etymology and pronunciation of words ending in “-iasis”
6
Where does the infinitive 'fieri' come from?
3
How can you tell whether prefixed ‘in-’ is the preposition ‘in’ or Indo-European ‘in-’?
8
Is the U long or short in the forms ussi and ustus of the verb ūro?
7
What evidence points to a long ō in the first syllable of nōscō's present-tense form?
5
Does vowel quantity ever change in the root of a word during conjugation?