I was updating the critical note to my blog post on this poem and inspecting Bergk's huge critical note when I saw that, concerning this line, he proposes «ἀ δέ μ' ἴδρως κακχέεται», maybe even «ἀ δὲ ϝίδρως κ.», on the basis of some book called «Crameri Anecdota» reporting:

which I translate to:

SWEAT: the Aeolians have it feminine. The following takes feminine inflection: [some corrupted version of part of this line], similarly to dawn; therefore the genitive ἱδρῶς)

Now I have no idea what book this is, and how reliable its claim about sweat being feminine in Aeolic – especially since it is compared to dawn, which is feminine in Aeolic but also in Attic, so no gender change, as opposed to sweat, which is masculine in Attic, and is not even the reported ἠώς in Aeolic, but rather αὔως. Also, the part about the genitive is obscure to me: what is that "therefore" there for? So:

What book is this? Who wrote it, and when? Is the claim about the gender of sweat in Aeolic reliable? Can you explain what the genitive part is trying to say? Is there a reason feminine gender has to do with the genitive being the way it's reported? Is the genitive different in Attic where sweat is masculine?

Thanks to @TKR, we have the book now. Here is the full entry: 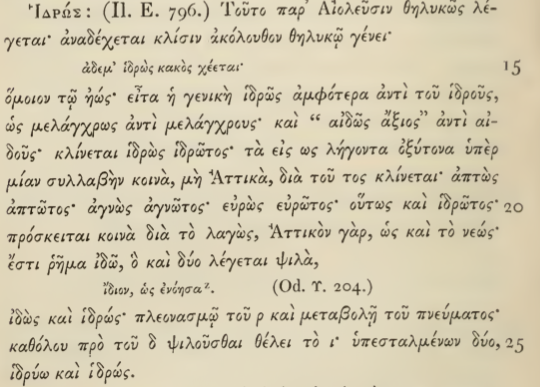 Now, the cover says this is a book published MDCCCXXXV (1835) by a certain J. A. Cramer, S.T.P.. Googling for this, I found two people: Cramer, John Anthony, 1793-1848 and Johann Andrea Cramer (link in French, no English version is available, only Danish, French, German, Esperanto, Bokmål, Russian and Swedish). Looking at link 1, it seems that is our guy. So at first sight, we're looking at a book by a 1700s-1800s guy, so why should we trust him on a gender change between Ancient Greek dialects? BUT, the cover says «e codd. manuscriptis», so what codices is this referring to? Should we trust this sort of glossary entry about sweat being feminine in Aeolic? ANd, as pointed out by TKR, if whoever wrote the entry thought sweat was feminine, how did the blatantly masculine κακὸς end up in a place where it seems to evidently refer to ἱδρὼς, which implies it should agree with it in gender as well as number, which would make it feminine, which it isn't?

Browse other questions tagged greek genus or ask your own question.

3
About the Alexandrian edition of Sappho: how were the poems assigned to the books?
7
Two unfindable words from Sappho Edmonds 12, Edmonds' version
3
About certain emendations to Sappho Edmonds 76 Campbell 147
8
About Sappho Edmonds 89 Campbell 48
11
Is it possible to predict the gender of nouns?
2
Figuring out the grammar of Edmonds 57 (Edmonds' version of the part in cruces of Lobel-Page 46)
1
About an Athenaeus quote marginally related to Sappho
6
When were different agent noun endings used in Ancient Greek?