Where does this (Sappho?) fragment come from

In my file of Sappho translations, the next-to-last fragment reads:

Sooner or later, it's going to end up on my blog, so I wanted to search for its sources. To my surprise, none of my sources (Greek Wikisource, Bibliotheca Augustana, Campbell, Edmonds, The Complete Poems of Sappho) seem to have it. I cannot find anything about it on the Internet: a Google search for l.1 and one for l.2 both revealed nothing. So does anyone recognize this fragment? What is this, where is this from, and is it really Sappho or is there debate about its authorship?

I haven't looked through safopoemas yet, but that is a long thing which I cannot do before dinner. I will afterwards, and will check back if I have any updates. It is anyway a good idea to have this thread pointing to safopoemas, should the fragment pop up in there, because this way anyone who happens to have somehow come across it knows somewhere it is present, and besides even if they have safopoemas they have no idea about sources or authorship debate, since safopoemas makes no mention of that.

It's on p. 454 of the Campbell's Loeb on Sappho and Alcaeus. If you have access to the Loeb Library Online, you can view it here.

No, you are mistaken - you can easily find it in Campbell on page 454 (checked de visu). Campbell puts it with the fragments that are written in the Aeolic dialect but "there is no means of establishing whether the author was Sappho or Alcaeus."

Zoomable scans of the papyrus known as Vindob. 29777 are available from the Austrian National Library http://data.onb.ac.at/rec/RZ00008466

Its catalog entry is www.trismegistos.org/text/59081

Thanks to @AlexB's comment, I now have the scan of the papyrus from an online resource. I actually have two scans. I include one here: 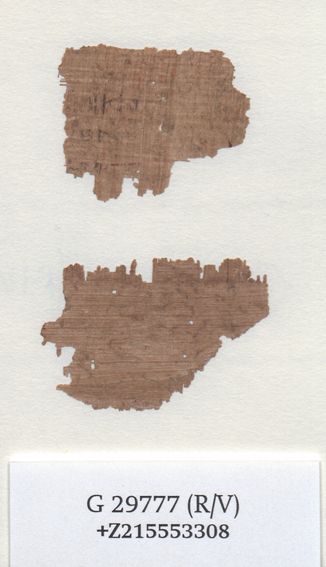 The ink is terribly faint, but with some squinting I would transcribe it as follows:

I chose scan 2 at random, but looking at scan 1 better I see it has a whole lot more visible stuff! Picture: 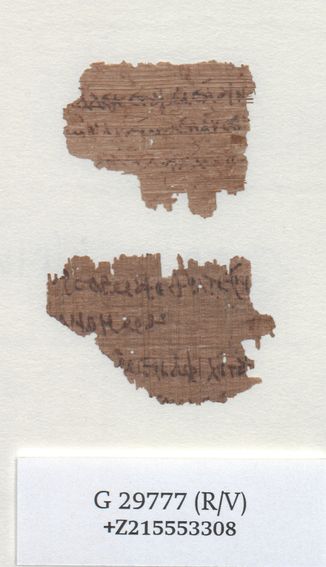 What I see as ẠI in the third line might just be an A with the following T being an I (with what looks like an almost-invisible horizontal stroke). Also, my Ỵ is actually just the upper half of an ypsilon, and it may well be two very close epsilons.

I also seem to see a I in what would be the fourth line.

I'm guessing the two scans are the two sides (recto and verso) of the same two scraps of papyrus, one of which contains our fragment, while the other seems to be blank on the scan 2 side, and contains:

I wonder what this is…

The answer to «How did this end up in my file?» is Bibliotheca Augustana ἐξ ἀδήλων βιβλίων. I assumed it would be in μελῶν α' because it's evidently a Sapphic stanza (and it is weird how BA completes it with –s and ^s while putting it in "from unclear books": were poems not assigned to those books by meter?), so I only looked there and not in "unclear books".

Not the answer you're looking for? Browse other questions tagged greek poetry resource-request sappho or ask your own question.

3
Sappho 94: the Spaniards' completion
7
About Sappho's epigram for the little girl Aithopia: first line (manuscript tradition and experts' take), and authorship
8
Did P.Oxy. 2288 contribute in any way to our knowledge of Sappho's hymn to Aphrodite?
3
About the Sappho fragment containing Doricha's name that was found first (Campbell 15, Edmonds 37)
2
Why does Athenaeus say this is not Sappho?
8
About Sappho Edmonds 89 Campbell 48
6
Identifying corrupted Sappho fragment or mention of Sappho found in just-newly-found-online Spanish edition of Sappho
3
Identifying alleged Sappho fragment from mishmash on otherwise generally good online resource