Is there a currently accepted etymology for the name Otho? Lewis and Short suggest it comes from the Greek Ὄθων, which I suppose they mean comes from ὄθομαι, but how good is that suggestion? There's also ὠθέω, but from Juvenal, the first O in Otho is definitely short.

For what it's worth, the OLD doesn't have an etymology for it.

As Varro says in his comment above, the cognomen Otho might be Etruscan, because the family was apparently descended from Etruscan princes, according to Wikipaedia:

Otho belonged to an ancient and noble Etruscan family, descended from the princes of Etruria and settled at Ferentinum (currently Ferento, near Viterbo) in Etruria.

Greek Ὄθων seems to have been a Graecification of the Roman cognomen.

There are of course many German Othones (= Ottones), but it seems highly unlikely that an old, noble Roman family should adopt a Germanic name, if only because the Germans were still mostly far away in the east at the time.

Utho seems to have been an alternative spelling, as on the coin below. Etruscan names containing -uth- do exist. And according to Draconis below, Etruscan didn't distinguish between u and o, so this would fit into the theory of Etruscan origin. 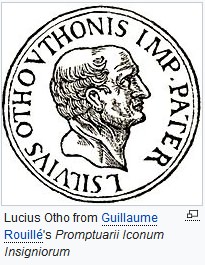 Places like Ut(h)ica and Uthina exist in northern Africa, but it seems Utica was founded by (Semitic) Punics and hence unrelated to the Etruscan language. According to Wikipaedia, Uthina was a Berber town, but it would seem likely that its name, too, was originally Punic.

There are also the towns of Othaea and Othoca in western Sardinia. Pauly suggests an alternative spelling Uta for Othaea and says it is "wohl" ("arguably"?) Punic, like Utica.

Pauly doesn't say much at all about the origin of the name Otho itself: 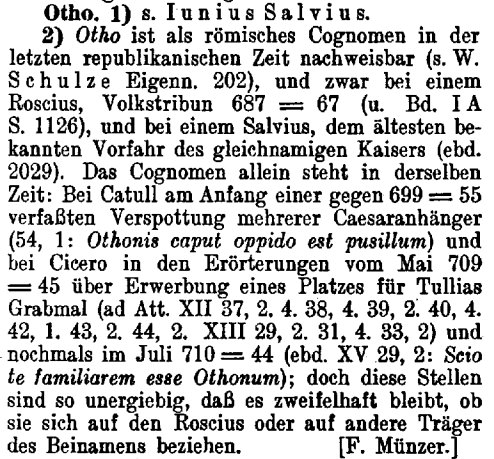 I could not find the reference Iunius Salvius Otho at its expected place. There are over 200 Iunii with long articles in Pauly, ordered mostly alphabetically, but he wasn't there. Three Iunii Othones are mentioned, but nothing about their origin seems to have been known.