Why does “ῤάρος” have a smooth breathing?

I recently discovered that LSJ lists exactly two words beginning with ῤ (rho with a smooth breathing mark): ῤάρος and its diminutive ῤάριον.

Most beginning Greek students are taught, of course, that all words beginning with rho should have a rough breathing (ῥ). LSJ has 957 results beginning in this way.

And, since the LSJ entry is pretty opaque, I'd also like to know:

I wasn't able to find out why this word, or name, has a smooth breathing.

As you may have seen already, LSJ actually has separate entries for "Raros", a name, and "raros", the "embryo" word that TKR's answer deals with. It's unclear to me if these have the same origin.

LSJ seems to have a bit more information and examples of words related to the name in its entry for "Rarion pedion":

Here is a relevant Quora post: Why is “ρ” translitered as “rh” instead of “r”? Philip Newton's answer cites a passage from Gaps in the System by Nick Nicholas:

rho with smooth breathing appears [...] in Ancient representations of psilotic dialects. The TLG corpus manages 57 instances, all of them Aeolic, with the exception of Rarus, father of Triptolemus, the first human to have been taught agriculture by Demeter; his name was apparently back-formed from the (non-Attic) Rarian field in Eleusis associated with the cult of Demeter. In the surviving corpus, Rarus and his field are predictably mentioned more by the grammarians, who loved a good exception, than by the classics themselves:

At the beginning of a word, r takes a rough breathing, as in rhá "then", rhanís "drop", rháx "grape", except for Rarus (a proper name) and the words derived from it, such as "Rarian Demeter" and "Rarian earth" and Rarias, which is a name for Demeter, and the Rarian field in Eleusis. It is said that for these the first r has a smooth breathing and the second a rough; but the two r's in these words should bear a smooth breathing both in the first and in the second syllable.

Not all authorities put up with the exception; the Suda preferred to call Demeter Rharias.

I also found a short allusion to dialectal variation in the realization of rho in an extract from the book Asianic Elements in Greek Civilisation (1938), by William Ramsay, "Chapter XXI: General Principles", hosted by The Gifford Lectures online:

The letter “r” appears and disappears in perplexing fashion in Anatolian words as written in Greek alphabet. Probably a soft “r” was used in Asia Minor as in the English word pretty; but there were doubtless more sounds than one “rho” in Anatolian although they cannot now be distinguished. In Greek the “rho” was rougher and is written ῥ except in Aeolic (which is more Anatolian in type).

As far as I know, all modern dialects of Greek are psilotic; according to Wikipedia

The loss of /h/ happened at different times in different dialects of Greek. The eastern Ionic dialects, the Aeolic dialect of Lesbos, as well as the Doric dialects of Crete and Elis, were already psilotic at the beginning of their written record. In Attic, there was widespread variation in popular speech during the classical period, but the formal standard language retained /h/. This variation continued into the Hellenistic Koine. [...] By the late Roman and early Byzantine period, /h/ had been lost in all forms of the language.

So at later time periods at least, and in earlier time periods for some varieties of Greek, there would have been no difference in pronunciation between rho with a rough and smooth breathing. It would just have been a spelling exception to memorize.

I don't have a solution to the mystery of the breathing, but to unpack the LSJ entry a little:

The word is only found in grammatical works, and these differ as to its meaning:

Some thoughts and notes so far.

This seems to be the only exception - which means it would most likely require an exceptional, ad hoc explanation.

Different sources trace back to the Greek grammarian Aelius Herodianus (2th century AD), the author of a most unusual compendium of exceptions Περὶ μονήρους λέξεως; see the following passage from A Companion to the Ancient Greek Language (ed. Bakker, 2010):

What other evidence do we have? As Goldstein 2013 writes, it's inscriptions and Latin transliteration practices.

cf. the relevant passage from Allen 1987: 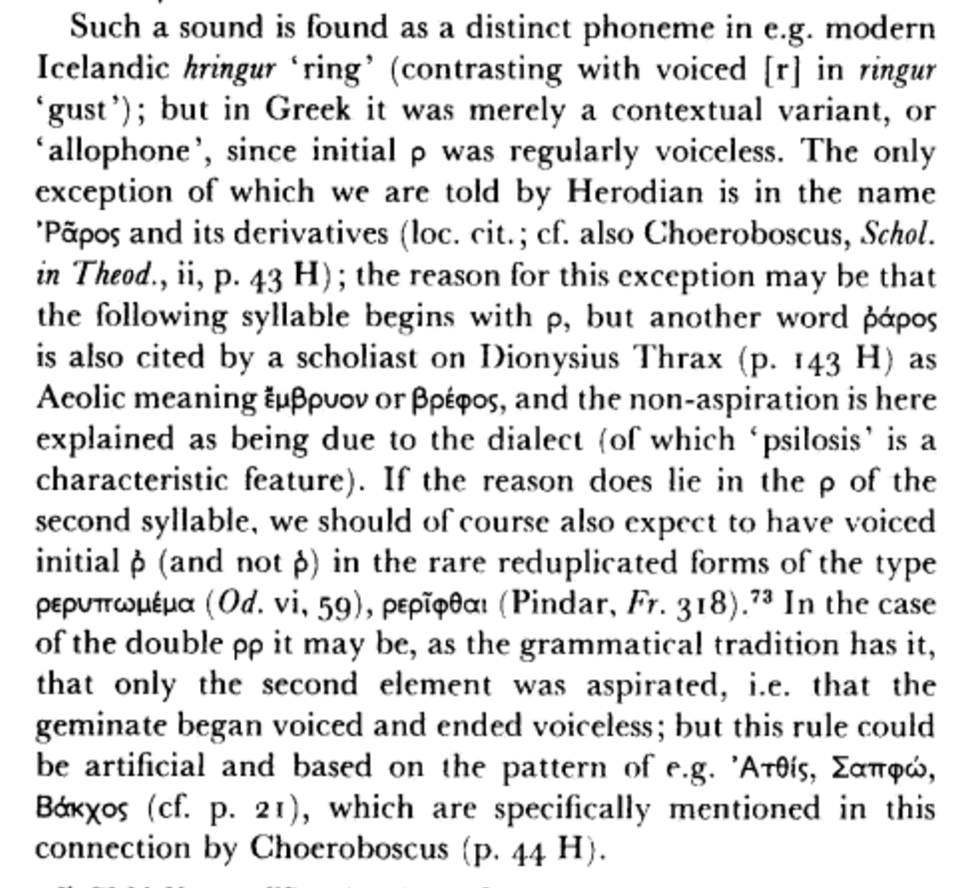 I also searched the Loeb and it seems it could be simply an editorial choice:

cf. Dorandi 2006 "More complex is the situation concerning aspiration and accents which are both marked only rarely and then often arbitrarily. The spiritus lenis (smooth breathing) is marked less often than the spiritus asper (rough breathing)"

"These symbols [the spiritus asper and the spiritus lenis - Alex B.] were not in the autographs of authors writing prior to this convention, and texts so printed reflect Alexandrian editorial work. Concerning aspiration in the literary corpora, we should note that although our Ionic literary corpus is generally transmitted with aspiration on the model of Athenian texts (while Lesbian remains psilotic), this may in many cases be merely conventional."

He mentions an interesting example:

"all MSS of Semonides of Amorgos’ ‘On Women’ 82 give khōs, crasis of the particle ke and hōs, but a recent editor, Martin West ( West 1989), prints instead kōs to better represent Semonides’ East Ionic ōs.

Thus, he concludes by saying

"Whether we should print aspiration in Ionic authors remains in a number of cases disputed; as becomes clear from the evidence discussed above, our most reliable sources for psilosis are epigraphic."

Not the answer you're looking for? Browse other questions tagged greek pronunciation irregular-words or ask your own question.

5
When transliterating from Latin to Greek, what kind of rho is used?
4
Is rough vs smooth breathing predictable?

12
Why does singular “mons” become plural “montes”?
15
Why are Greek nouns in -ον, -ος transliterated in Latin as -um, -us?
7
Does Classical Latin have “lilies prolepsis”?
12
Etymology and pronunciation of words ending in “-iasis”
4
Why isn't accentuation recessive in ταμίαι? (Greek)
4
Is rough vs smooth breathing predictable?
7
Does ancient Greek have its own terms for grammar?
6
Are there any minimal pairs distinguished by breathing?
4
Why is intereo not declined like habeo?