How was Trajan's comic called?

Trajan's column contains a famous spiral relief. The relief is organized into panels — there are no lines for panel boundaries, but the composition makes the panel structure quite clear. The relief (a replica) is on display panel by panel at Museo della Civiltà Romana. Here is a photo from the museum home page: 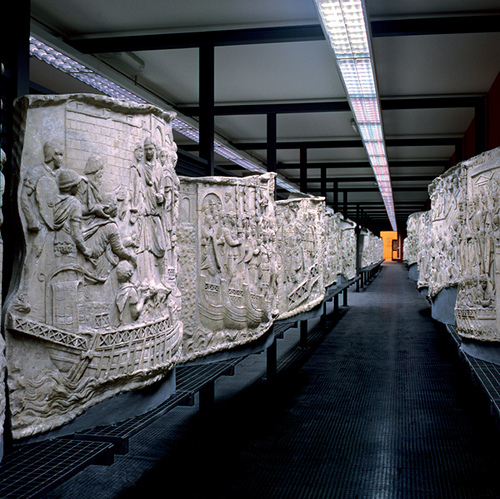 Are there ancient Latin descriptions of this relief? I am particularly interested in references to the panelated structure as opposed to being just a "single wide picture wrapped around a column". The inscription at the base of the column does no mention it.

Because of the structure I would consider the story an early version of a comic. My impression is that it is the best known "early comic" of ancient Rome, even if not usually known as a comic. I am not trying to imply that the modern comic took any influence from it, but just observing the similarity in structure. To some extent the question is "what would the Romans have called a comic", but I want to keep the speculative aspect to the side and focus on finding passages about this particular piece of work.

If there is something interesting in post-classical literature or by some miracle there is no extant classical mention of it, later passages are also welcome.

As for ancient sources, I looked in Van Heck's Breviarium urbis Romae antiquae, which gathers ancient references to ancient monuments, etc. Of the 3 primary references to Trajan's Column, one is the text of the inscription on the base; and one from Epit. de Caes. (which I'm not familiar with) and one from Eutropius basically just mention the column as being above T.'s ashes. They're entirely uninterested in the relief.

Richardson, A new topographical dictionary of ancient Rome, in the entry for Forum Traiani, has this to say about the relief:

The theory that the relief spiral had its origin as a book roll, a theory first propounded by Birt and endorsed repeatedly by others, ignores the excellence of the overall design, in which patterns are worked out vertically, as well as in sequence. And such continuous narrative is at least as old as the Odyssey Landscapes from the Esquiline, which seem hardly likely to have been derived from a book roll.

I had never considered the Odyssey Landscapes in relation to the Column of Trajan, but that's an interesting connection. I believe those paintings are from the 1st century BCE.

Coarelli, Rome and environs, appears to follow the theory of Birt that Richardson mentions. He says this (this is the translation by Jim Clauss and Dan Harmon from the University of Washington, Seattle):

The reliefs convey not so much a celebratory character as a documentary one. They have been interpreted as a figurative representation of Trajan's Commentarii, a prose narrative of the two Dacian wars that unfortunately has not survived.... This interpretation seems all the more plausible if we take into account the location of the column between the two libraries (Trajan's commentaries would have been kept in the Latin one) and the very appearance of the relief, which reproduces the form of an ancient book – a scroll (volumen).

This approach does indeed seem to view the relief as something akin to the graphic novel version of Moby Dick or the Bible, though without resorting to calling it a 'comic.'

Finally, one of the essays in Calvino, Collezione di sabbia (Collection of sand) is a very fine narrative reading of the relief – a result of Calvino's close-up inspection of the column itself, from the scaffolding that was erected around it at the time. It's been a while since I read the original Italian version, and I can't locate it on my shelves, but the English translation that I managed to find actually uses the word strip – once in 'scare quotes,' which may point to the double meaning 'continuous strip' (e.g., of parchment in a book roll) and 'comic strip' (and I believe the Italian word striscia, like the English word strip, can cover both these meanings).

Not the answer you're looking for? Browse other questions tagged classical-latin history passage-request architecture or ask your own question.

6
What exactly was a pastillus?
6
How was Latin taught in Western Europe in the 17th century?
16
What was a language for the Romans?
2
What is Eura called in Latin?
7
How was "VV" pronounced?
6
How was "gnosco" pronounced?
4
What was the latin command to plunder?
4
How the Latin Hexameter was adopted and developed from the Greek?
3
How the 'conflict' between heart/feelings and the "head" was described in the classical period