Stack Overflow for Teams is moving to its own domain! When the migration is complete, you will access your Teams at stackoverflowteams.com, and they will no longer appear in the left sidebar on stackoverflow.com.

Check your email for updates.

What was a draco?

The Latin dictionaries I checked suggest that the word draco is attested in classical literature and it is often translated as "dragon". However, it is my impression — which may well be wrong! — that the current dragon imagery in popular culture comes mainly from China or that region of Asia more broadly. Therefore I suspect that my intuitive image of a dragon might be far from what the Romans meant by a draco.

So, what was a draco? Could it be just any snake or serpent, or did it refer to something more specific? Have we identified a species that the Romans would call draco? Was it a real thing or something more mystical? Are there illustrations of what a draco is?

The word dragon is far older than the Medieval dragon or the West's knowledge of the Chinese dragon. In fact, it's no coincidence, either, that dragon is derived from draco. It's the meaning of the former which has changed, so as an archaicism, dragon is still a fine translation.

As to what the Greeks and Romans thought of draco (and δράκων), these would be simply "large snakes." In Greek mythology, δράκοντες were large enough to be enemies to heroes and gods: Cadmus slew the Ismenian dragon, which you can see represented on a vase here: 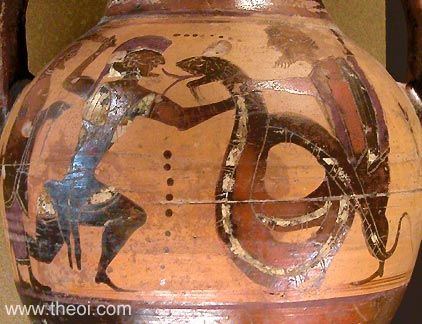 This really is just some monstrous snake, and is likely what ordinary people thought of when they heard the word.

However, they could also be true monstrosities, having multiple heads or being underwater nightmares.

In some places, like Odyssey 12.202, it's just a regular snake, and Lewis & Short list a number of pet dracontes:

In short, when you see draco, think snake first, but allow for the possibility of some monstrous snake as well.

9
What did the Greeks and Romans call their pets?
4
request for translation from Latin to English

44
What punctuation was used in Classical Latin?
12
What is the correct way to say "Noctis Avem"?
10
What is a black sheep in Latin?
9
"Desinat in piscem" in Horace's Ars Poetica: morphology or looks or what exactly?
6
What exactly was a pastillus?
17
In Classical Latin, what was the geographic extent of "Asia"?
1
What was the classical era word for a bastard?
6
What was the use and frequency of use of Latin "mactāre"?
4
What was the latin command to plunder?
4
Is "Fantasia" a classical Latin word? What was its original meaning?