Is there such a thing as "word-[space-comma-space]-word" punctuation in Latin?

I'd like to typeset an excerpt of Metalogicus from Ioannis Saresberiensis. The Patrologia Latina version can be found here (MPL199 – the exact reference of the excerpt is Lib. III, Chap. 4, col. 900c.)

The issue I have is that the editor seems to use three different punctuation items: 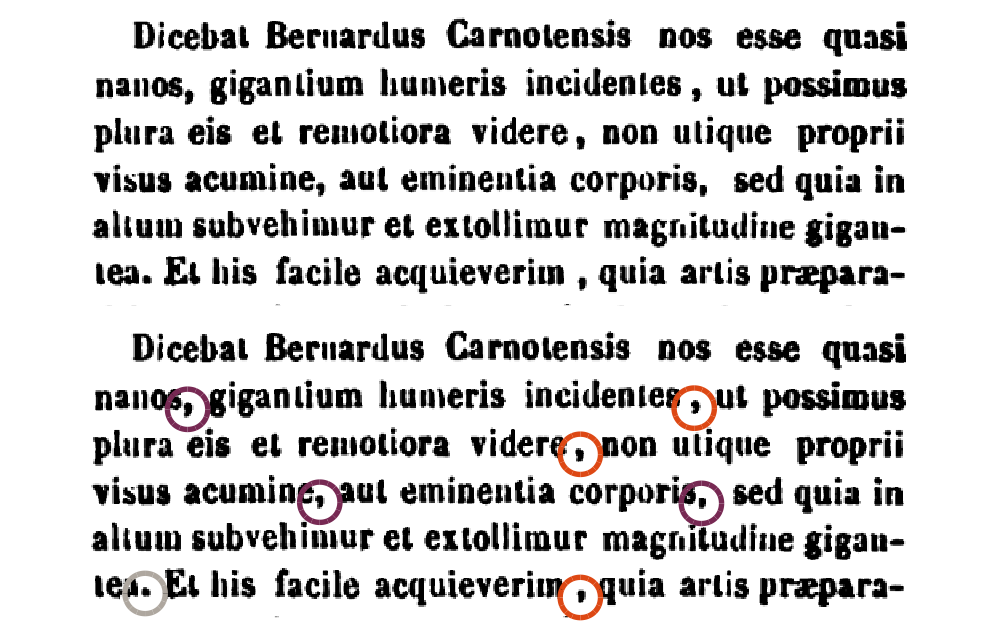 Question: Is there really such a thing as space-comma-space in Latin, or "orange" commas are just regular commas that are badly positioned?

Or in other words, should I typeset the second line like this:

orthography punctuation
Share
Improve this question
edited May 5 '17 at 1:38

As we all know, the Romans did not have punctuation. Modern (and not so modern) editions of Latin books generally follow the typographic norms of the country where they are printed. For example, Latin texts published in France and Germany use lower-case initials for adjectives derived from proper nouns (latina, like latin, lateinisch), while those published in England use capitals (Latina, Latin). In modern French typography you leave a space before and after complex punctuation marks (? ! ; :) but only after simple punctuation marks (. ,). But in older books you find spaces both before and after commas and full stops. Here is an example from an old book about typography: https://books.google.fr/books?id=Kdmpyl_TXQMC&pg=PT12&hl=fr#v=onepage&q&f=false The editors of the PL were simply following the then current French style.

The typesetter just used extra space before some of the commas to help get the text block properly justified on the right edge. So [space],[space] is completely equivalent to [no space],[space]. You should typeset without the space before the commas.

When interword spacing is used for justification, one of the longstanding standard principles in typesetting is that you want to avoid having the large white spaces in multiple (esp. 3 or more) successive lines of text line up in such a way that they form a noticeable path or 'river' down the page (rivers that run over just 2 lines can be quite hard to avoid, esp. in a text that has many short words); as I consider the occurrences of [space],[space] in the example, it looks to me that space is being used in front of the comma instead of an extra wide space after it precisely where this is necessary to prevent such rivers.

Note also that, technically, there's a river at the beginning of lines 2–6 (to the right of 'nanos,' – 'plura' – 'visus' – 'altum' – 'Et'). In this case, though, all the spaces are regular size – or perhaps even a bit thinner – so the effect is mitigated and the alignment of spaces over 5 lines doesn't 'read' as a river.

Not the answer you're looking for? Browse other questions tagged orthography punctuation or ask your own question.

43
What punctuation was used in Classical Latin?
6
Were comma splices avoided in Modern Latin?
17
The Latin word “Have” rather than “Ave” as a translation of the Greek word Χαῖρε?
8
How can I ask the spelling of a word in Latin?
7
Use of circumflex in Latin: Is there a difference between "hora" and "horâ"?
6
Which Latin word has the most spelling variants?